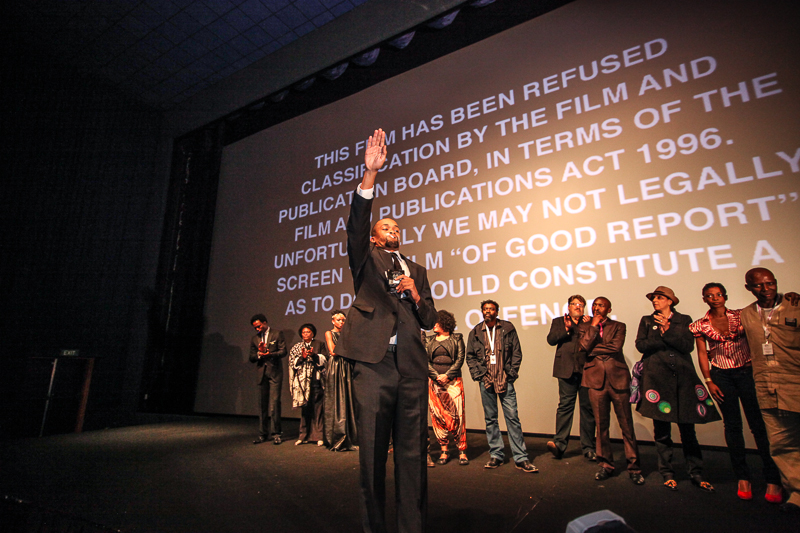 Unclassified films are illegal to screen, which equates to a functional ban on the production. The ruling was imposed on the basis of having interpreted the representation of a sexual encounter of a Grade 9 pupil, Nolitha (played by 23-year-old Petronella Tshuma) as being child pornography.

Tongues have been wagging in creative circles and the media, and given that the film is divorced from any overt perspective on political matters (as in the case of The Spear), it is clear that this matter relates to some rather primal conflict over the interpretation of a particular image.

In this case, the battle over meaning takes place in the awkward, sexually liminal space of the moment of the young female character’s transition from archetypal “virgin” to archetypal “whore”, and what she, the figure of the girl, means.

It probably wouldn’t be completely unfair to assume that the film is objectionable to the classification board because of this very liminality, and the way in which the morality embedded in the process clearly regards anything that isn’t exclusively either “virgin” or “whore” as a kind of abomination.

South African film and South African audiences remain equally conservative. The idea that representations of people, places, things and events can have a lot of different meanings and aren’t consistently, singularly defined is, surprisingly, not taken for granted by the typical South African viewer, practitioner or institution of film.

We aren’t yet comfortable with the multifarious nature of representation, and expend a lot of hot air trying to settle on the one, all-encompassing, so-called “South African voice”, which, it turns out, we’re really struggling to locate.

It’s a self-evidently flawed project, because it’s ridiculous to think that such a thing could actually exist in a finite sense.

But the truth is that we’re not really even trying to experiment much with our visual representations in the moving (and still) image.

We’re largely extremely boring as a film culture. Our stories and our ways of telling them are musty old hand-me-downs across the board. Our filmic vocabulary is still extremely limited, and no one is really interested in creating new words, and the ones who do attempt to create meaning out of the meaningless are effectively excluded from the canon, as in the case of Of Good Report or Michael Rix’s pioneering and challenging film Accession. Accession went largely unnoticed in its home country last year, and its deeply uncomfortable content would likely have had an equally negative reaction from the powers that be had it been paid the attention it deserved.

Twenty years of post-apartheid filmmaking have culminated in the banning of one of SA’s first really aesthetically idiosyncratic films, which has happened purely because the sexualised young female of Nolitha doesn’t yet have a proper meaning in this society.

She stands simply as the distasteful image of the abstracted spoiling of some infantile feminine “purity”, but not as herself. Because, right now, she means nothing, and, therefore, cannot be “classified”. And this is precisely the problem. How is this girl to become classifiable?

The simple answer is that she needs the agency and space to become meaningful by herself – by acknowledging her presence as a source of anxiety and giving the image of the young girl room to play and be herself, we can learn about her.

But unfortunately this space does not yet exist in South African film. This explains the disproportionately oppressive reaction of effectively banning the film – because it’s shocking, because no precedent exists to accommodate her.

But this incident should make it very clear to us that being truly “creative” is a humanitarian act, and that to “shock” a framework that structurally excludes the reality of certain individuals is deeply noble.

Aesthetic innovation is crucial to the liberation of the “unclassifiables”. It’s our ethical duty to our fellow South Africans to get more adventurous with how we go about making film.

The question is, how?

This episode in SA film history comes hot on the heels of another fiery debate that has been raging (kicked off by Mail & Guardian film writer Roger Young (http://mg.co.za/article/2013-05-24-00-a-car-chase-too-far-what-sa-film-cant-learn-from-hollywood) of late.

The debate centres on the role of the statutory body that stands as the guardian of South African cinema, the National Film and Video Foundation (NFVF), and the conflicting interests in its mandate of developing a profitable, self-sustaining industry, and stimulating the development of the “South African voice”.

But it is not only the NFVF that is the cause of this representational stagnation, but every filmmaker and audience member who is afraid of novelty and/or overly invested in sustaining a very limiting palette of expressive modes.

We need more mavericks. We need more artists. As a society broadly, we need to radicalise how we see, and the filmmaker could be our shaman figure.

Film is globally still a young medium (just over 100 years old) and it’s even younger in South Africa.

The imperative faced by SA filmmakers to create new ways of speaking is very much an issue of aesthetic maturity within the medium. There was no particularly established industry during the apartheid era and only a handful of very dubious, recognisably indigenous aesthetic traditions existed in cinema, such as that of Leon Schuster, for example.

It’s obviously an entirely ridiculous endeavour to try to transform something that never really existed in the first place.

This seems to have been grasped in the industrial sense, and the need to grow SA film from the ground up through initiatives that develop applicable skills, or the development of new distribution platforms.

But somehow – probably through a mix of reactionary mindsets, and lack of inspiration, and the generally flawed attempt of trying to summon an industry into existence by imposing highly limiting structures on modes of expression (like the notorious three-act structure) -we have allowed our very creativity to be colonised by ideas like “the hero’s journey”. To question formula is sacrilege, especially since it has become so tied up with the idea of “transformation”.

Qubeka’s noir homage, all the more so for its nuanced use of genre, is a landmark production in that it feels like it belongs to present-day South Africa. It understands its historicity as incidental to the act of telling a story, rather than understanding it as somehow the actual object of its story.

This is unusual in South African cinema, which typically tries to use macro-stories to illuminate micro-stories.

This dominant approach is evident in the fourth “business objective” the NFVF lists on its website – “to promote Social Cohesion [sic] and promote opportunities to express the nation’s stories through film”.

Certainly this (and the proper-nouning of “Social Cohesion”) indicates that the idea exists that the narrative of “the nation” ought to take precedence over the narrative of the individual or community, despite who might or might not appropriately be considered exemplary of “the nation”. The national narrative colonises the individual. And characters like Nolitha – complex, sexual young females – are not regarded as proper citizens.

We still haven’t found the innovative confidence to represent our realities back to ourselves in a way that is vulnerably personal and exposed. We haven’t explored, we haven’t experimented. There isn’t really much of precedent for this and it will take a combination of bravery, willingness to be alienated and an aesthetic radicalism to continue to give like figures Nolitha meaningful existence in South Africa.

– Sarah Dawson is a programmer at the Durban International Film Festival. She writes in her personal capacity.