Tuareg music has exploded in the past decade, ever since the fathers of the scene, Mali’s Tinariwen, released their debut album for Western consumption in 2001.

Tinariwen are now the global faces of Tuareg music, having performed all over the world and collaborated with the likes of TV on the Radio and guitar extraordinaire Nels Cline, among others.

Their most recent album, 2011’s Tassili, reached 68on the UK charts and won a Grammy for Best World Music Album.

These Tuareg musicians have played a crucial role for Tuareg society, drawing much needed attention to their plight in the Sahel and the Sahara.

They have also documented Tamasheq culture and revolution in song.

Tuareg musicians find themselves in a tight bind at the moment. Some have been forced from their homes with threats of injury and death, while others have fled to refugee camps in neighbouring states.

There are some who have chosen to tour the world until it is safe to go back home to Mali, where war has dominated the headlines in the recent past.

These musicians were in the firing line of the extreme Islamists who wormed their way into the Tuareg struggle for an independent state and then totally railroaded it, before French intervention earlier this year drove them deep into the Sahara.

The current political situation is in the balance. The Tuaregs, backed by the French, still control the city of Kidal and according to a June agreement, newly elected Mali president Ibrahim Boubacar Keita must hold talks with the Tuareg leadership within 60 days of his forming a government. So although some degree of peace has returned to the north of Mali, where does this leave the Tuareg musicians? 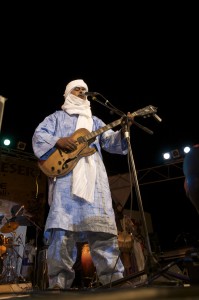 Amanar’s (Stars that Guide) front man Ahmed Ag Kaedi is one such musician.

When I sat down with him in late 2012 to chat about his recent turmoil, he told me his story of having to flee for his life with his family.

“The Islamists occupied Kidal, and one day I went out to see my camels in the bush and when I came back I saw there was smoke coming from my house,” says Ag Kaedi. “When I got there my house had been burnt, I found my sister crying and I asked her what happened.

“She told me that four masked men had arrived asking for me. They went into the house and saw my sound system and my instruments and they poured fuel on them and set them on fire.

“They talked to my sister and said, ‘When Ahmed comes back tell him we are against music – music is no longer allowed in Kidal. If he plays music in Kidal again, we will come back and cut off his fingers.’”

It is hard to sit and listen to Ag Kaedi’s story; you can see the pain of what happened etched on his face.

He is a brave man, in South Africa to spread the message about what is happening in Mali, even though he has had his life threatened. Ahmed was forced to flee Kidal for a refugee camp in Niger in late February 2012  terrified of what the extremists could do to his family.

“My father came and gave me money for transport and asked me to take my family and leave the country as soon as possible,” says Ag Kaedi. “That is how we ended up in Niger. I was close to becoming mad, because my life was completely destroyed. I was devastated. My father is still in Kidal – he refused to leave as he is 80 years old. ‘I am not going anywhere. If they want to kill me, they must kill me,’ he said.”

Ag Kaedi’s song Tenere (meaning desert) – which his band Amanar recorded in 2008/09 and released in 2010 – can be interpreted as rather prophetic.

Ag Kaedi sings: It’s better to be alone than with a bad friend / Who always makes you do what you despise / The one who doesn’t have the same spirit / You’d better not walk with him / Because when you open your heart / He changes his face / I beg you, my friend, separate yourself from bad company / In spite of the respect you could show them / They would never recognise it

On Alghafiat (Peace), Ag Kaedi sings: My brother, be careful, because one morning we could find ourselves locked in a pen / With racist threats and finger-pointing / The world nowadays is so tiring, with wars all the time

In the same song, Ag Kaedi defines Tuaregs in five categories: The first ones are rebels / the second ones, the poets / the third ones are discouraged of the Tuareg cause / the fourth ones just cling to life / the last ones are the bearers of lies / and worshipers of the word ‘project’.

It’s clear from looking at these five-year-old lyrics that all was not well in the struggle for independence and that musicians like Ag Kaedi were hesitant about outside influence in the struggle.

I ask Ag Kaedi if the situation in Mali had changed the songs he writes.

“Before the more accepted songs were the songs calling people to revolution, to fight against Mali. Now I realise that because this revolution has failed and has been kidnapped by the Islamists, it is no longer possible to encourage people to revolt, because the fight has become for fundamentalism, not for freedom. Tuareg society is divided. Some feel we should collaborate with the Malian government, others feel we will not get any development when we stay with Mali.

“Now the majority realise that there needs to be another way besides violence – of which we’ve had 50 years. It is a big debate among Tuareg artists at the moment: to continue fighting for freedom or to work with Mali for more education and development. I had a problem in the past because many Tuareg artists were advocating violence, but I never talked about this,” says Ag Kaedi. “Now we have no choice but to talk about these things.” 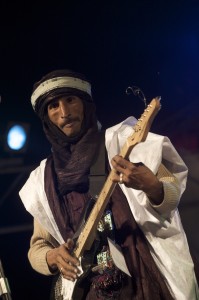 Another of the great Tuareg bands is Terakaft (Caravan). In 1963 during an uprising in Northern Mali, Tinariwen band leader Ibrahim Ag Ablili (then aged four) watched as his father was executed for assisting Tuareg rebels.

After that Ibrahim and his brother Diara lived in refugee camps for many years, before moving to Libya and Algeria. In the late 1970s, fueled by Algerian Rai and Moroccan protest music, as well as a few Western influences like Jimi Hendrix, Dire Straits, Led Zeppelin, Carlos Santana and Bob Marley, the two brothers formed a band in Algeria to play parties and weddings.

In the early 1980s the brothers were compelled by Libyan ruler Muammar al-Gaddafi’s call for Tuareg men to undergo free military training. The brothers completed nine months and did another stint in 1985, this time among the leadership of the Tuareg rebel movement based in Libya. Here they met other Tuareg musicians and formed Tinariwen, recording in a makeshift studio for anyone who could provide a blank cassette tape. These tapes spread like wildfire through the Tuareg community in exile and even back to Tuaregs living in Mali.

The band’s legend was secured and inspired a whole new generation of Tuareg guitar bands like Terakaft, started by former Tinariwen members.

Diara would eventually leave Tinariwen and join Terakaft. Recently he too has expressed dismay in the revolution.

“I don’t understand what is happening in Mali,” Diara told the The World in late 2012. “There has always been conflict between north and south, but things are different now with the Tuareg rebels and the Islamic extremists. Like many Tuaregs I’m just watching the situation, because it’s so difficult to understand what the future holds.”

Diara was speaking from Algeria, where he was holed up. His nephew and band mate Sanou Ag Ahmed is quoted in the article as saying that life in Mali was impossible because of the censorship of the Islamic extremists. He said exile was a “choice, because my life is as a musician”.

Around 2009, Tinariwen’s songs began to convey a sense of disillusionment with the revolution too, questioning the struggle.This was patently obvious when the band chose to open their album Imidiwan with the anti-revolutionary Imidiwan Afrik Tendam, written and sung by Ibrahim.

It goes: Is the revolution like those trees / whose branches will grow if we water them? / I have lived with this obsession for 10 years / I have come among brothers / My friends, what do you think? These men have been living with oppression / since the day of their birth / They cannot make the trees grow with their water.

Listening to the August 2012 Terakaft album Kel Tamasheq, it’s clear to see that the failed revolution of 2012 weighed heavily on the Tuareg band’s mind. On the album the band offer up a national address of sorts to the speakers of the Tamasheq language.

On Imad Halan (The Volunteers) the band sings: I am stunned at your involvement / Which does not support those who work / If this is the revolution you want to provoke / I can see it coming from afar

The band is opposed to the Ansar Dine (the Islamist rebel group, now deemed a terrorist organisation by the United States) and AQIM (Al-Qaeda in the Islamic Maghreb) influence in northern Mali and express it over a dark, sinister blues tune, Imgharen Win Ibda, which forebodingly proclaims: It’s an age favourable to war /  The years to come will be full of fury.

On Idja A Seman, the sense of foreboding becomes palpable: There is no one left because of the violence of war.

The album closer Bas Tela Takaraket (There Are No More Morals) begins with the sound of the wind blowing. A gentle solo guitar provides the basic rhythm, and the vocals enter, again solo, almost like a whisper around a fire in the desert at night. The singer is taking us deep inside his world, into his private thoughts, which offer a more direct commentary on the revolt:

Our culture has escaped us / Those who were warriors before, armed with sabres / Those from whom we have inherited our ancestors / We continue in their path / We will not submit / Nor will we make an alliance with the enemy.

The enemy here is clearly Ansar Dine, AQIM and MUJAO (Movement for Oneness and Jihad in West Africa). As the wind blows to end the song, it’s like the home truths that are being spun disappear into the desert night sky.

Bob Dylan famously sang that the answers are blowing in the wind. The kicker in that song, though, is this: How many years can some people exist / Before they are allowed to be free?

The Tuareg musicians will continue to ask that very question.

This piece was originally published in Ons Klyntji, the oldest Afrikaans zine. For  a copy of Ons Kltntji (R50 including postage) email: info@toastcoetzer.com

2 for the money: Abdullah from the group Tinariwen