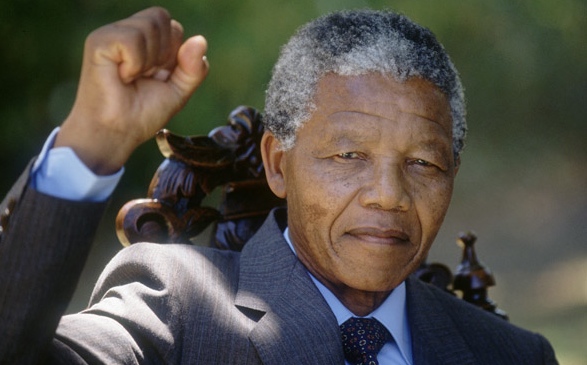 “There is a white family out there fucking out [on fear],” sneers The Brother Moves On (TBMO) frontman Siya Mthembu, with a sardonic grin as the local art-rock band moves into a sinister groove flattened by ugly trombone notes.

The multi-racial crowd of twenty- and thirty-somethings gathered at The Lighthouse in the Johannesburg suburb of Mellville for the launch of A New Myth, TBMO’s debut album, cheer Mthembu on.

It is Friday night, December 6 2013. Nelson Mandela is dead.

Racial genocide – “The Night of the Long Knives” – feared by white conservatives in South Africa and amplified by the foreign media, must be erupting in their bunkered minds, suggests Mthembu with irony.

“This song is dedicated to ‘Die nag van die lang messe,’” says Mthembu in Afrikaans. “We are sharpening our pangas, and those who do not have pangas are sharpening their rocks… We are organizing this logistically through BBM (Blackberry Messenger),” he cackles.

Mthembu’s angry, cynical posturing on stage feels like the first shriek of individual realism, and a counterpoint to what has otherwise been a public reception of the news of Mandela’s death on December 5 that has been dominated by homogenous, solemn bewilderment slowly evolving into celebration. The trauma of loss, yet to sink in.

Mthembu’s is a squawking critique of the Madiba mythology and legacy among the silence of parents and children gravely placing tributes outside his home on a still Friday afternoon.

On that Thursday night, when news of the former president’s death broke, the vigil outside his Houghton Johannesburg home embraced the Mandela as benign conciliator and patriarch of the nation – one deradicalised by liberal history and constructed as the dyke holding back waves of black anger and bloodlust.

It was a celebration of the success of South Africa’s middle-class experiment as kids apparently straight out of the pubs and clubs joined gym-bunnies dressed in leopard skin tracksuits and neighbours to mark Mandela’s death.

“In South Africa, our vision of equality and freedom is premised on modes of privilege,” says Richard Pithouse, an academic at the Rhodes University politics department, “If you have the money, you can be part of a reconciled and equal society.”

If you are poor and black, says Pithouse, it is difficult to access justice and equality – principles which South Africans construct into Mandela’s embodiment and then project back into themselves and their sense of exceptionalism and nationalism.

“These are principles affirmed in terms of law and policy, but also a symbolic imagination of what life will be like, but there is no follow through,” says Pithouse citing the examples of private landowners and local municipalities, whether run by the ANC or Democratic Alliance, who continue to evict people from homes without a court order – in contravention of the Prevention of Illegal Eviction Act and the Constitutional Court’s numerous judgments on rights to housing.

On Saturday morning at around 2am, 45-year-old Nathi Hlatswayo was standing in front of the shrine of flowers and candles on 12th Avenue in Houghton.

Hlatswayo, who has never had a formal job and currently works as a car guard in Yeoville, says he has come to Mandela’s house to “pay tribute to the man who united us” but also “because I can make more money guarding cars here than in Yeoville”.

Does he feel South Africa is still united: “Because we are sad, yes… But we are divided between the poor and the rich. There are too many people struggling with poverty and hunger today,” he says.

The class divide widening under a government run by Mandela’s ANC, articulates itself in actions, by the state and by private businesses – or both when interests conflate – that suggest “The Night of the Long Knives” is much less something white South Africans should fear, but rather something perpetrated on poor black South Africans, on a daily basis – making it a polar night of long knives.

This was evident at Lonmin’s Marikana mine last year when the South African Police Service killed 34 miners striking for better wages on August 16. According to a lawyer at the commission, 32 of the 34 dead were killed by bullet wounds to the upper-body – evidence contradictory to the police claims that they were acting in self-defence.

On Thursday night, as President Jacob Zuma was about to tell the nation that Mandela had died, Nomzamo Zondo was texting messages from her holding cell at Johannesburg Central Police Station.

Zondo, an attorney from the Socio-Economic Rights Institute (Seri) had been locked up for over five hours without being charged. She was not allowed to see her five-month old baby who she was breastfeeding.

The Seri legal team had earlier that day won a battle at the Constitutional Court, which instructed the City of Johannesburg to permit informal traders, which it had evicted from streets in October, to return to work. Despite the court order, the Johannesburg Metro Police Department (JMPD) met trader attempts to set up stall again with violence.

“[The police] pushed me around” read Zondo’s penultimate text message to this journalist before her release, “But I was arrested for confronting a JMPD officer who was shooting a trader who was running. He had confronted the officer [because] he had two rubber bullet wounds to the back.”

The pogrom against white South Africans appears as likely as the second coming of a man sanctified and deified into an almost anodyne shell of his political self.

Yet South Africa’s democratic failures – a lurch towards social conservatism, increasing authoritarianism by a state that is less transparent with every passing day, the inability to translate a multi-billion rand education budget into empowered citizens, a replication of the apartheid state’s repressive measures against citizens who mobilise and corruption that siphons millions from the national treasury every month – suggest there is an ongoing assault on the Rainbow Nation’s poor blacks.

Is it because South Africa, in its uniquely schizophrenic and superficial way, pays only lip service to the virtues we construct into Mandela’s embodiment, and which we attempt to project back onto ourselves and our perceived exceptionalism?