She released ‘Secure in Comfort’, the report of her findings from the investigation into upgrades of more than R240 million at Zuma’s personal home in Nkandla, in rural KwaZulu-Natal. Whatever pretences Zuma still maintained about being a president who was an accessible “man of the people” scarpered out the toilet window like the village Lothario on hearing his lover’s husband braking his long-haul truck out front.

The hot-footing had little to do with Madonsela’s curtain-like weave – constantly drawing together as she read the report coquettishly for the gathered media – but the actual report itself.

‘Secure in Comfort’ is unequivocal in its finding that the executive acted unlawfully and contrary to the Constitution in adding a helipad, swimming pool, a cattle kraal with culvert and various other non-security “comforts” to the president’s home – from tax-payers’ pockets.

It is also not particularly flattering in its portrayal of a man who appeared bereft of the presidential qualities to enquire and ensure that spending was restrained, in keeping with the tenor of the Constitution and inclusive of the community around him.

Or a particularly sensitive husband: in her report, Madonsela noted that Zuma’s first wife, MaKhumalo, had her tuck shop moved “at the instance of the state to a building that might even be inconvenient to the owner”. 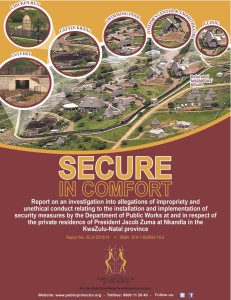 The full report on Nkandla can be downloaded here

While MaKhumalo was undoubtedly counting her losses with the rest of the nation yesterday, the doom and gloom of Afro-pessimists staring over “the precipice” was kept in check as the country’s largest trade union, the National Union of Metalworkers of South Africa (Numsa), took to the streets in cities across the country.

In Durban, thousands of environmental and community activists joined Numsa in a display of a potentially new unity stirring against the ruling status quo. The union is already at loggerheads with the Congress of South African Trade Unions (Cosatu) because of the federation leadership’s supine approach to Zuma’s rule as African National Congress (ANC) president, and head of the tripartite alliance that also includes the South African Communist Party (SACP). 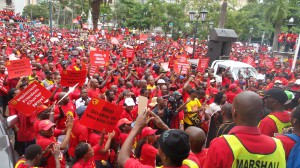 Numsa was protesting youth unemployment and wanted to send a message to Zuma and his government that it was against the Employment Tax Incentive Act, which aims to subsidise the employment of young South Africans. Dr Pixley KaSeme Street was lined with red T-shirts and banners reading: “Build a movement for socialism”, “Smash the unjust capitalist system now” and “United front against neoliberalism” as thousands of protesters marched on the Durban City Hall.

Banners were also visible for the Right2Know Campaign and for the South Durban Community Environmental Alliance (SDCEA). “The revolution will not be postponed because there are elections,” screamed one youth leader to cheers from the crowd. 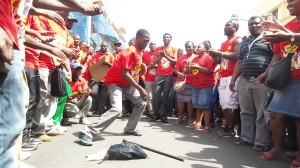 The march was organised by Numsa in co-ordination with community groups, faith-based organisations, other unions, numerous women’s groups, taxi associations and a number of youth formations, according to a statement the union released on Monday.

The presence of social movements and community activists who organise around issues that range across the political spectrum hinted at the possible beginning of a potential new coalescence of the Left with a trade union that appears to be gaining momentum as it engages with public disaffection.

Whereas the tripartite alliance has been ignoring issues like the government’s killing of 34 striking miners at Lonmin’s Marikana platinum mine in 2012, this new incarnation of the Left is making its voice heard. Similar marches took place in Johannesburg, Cape Town, Port Elizabeth, Bloemfontein, Emalahleni and George. 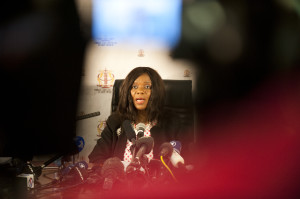 One of her findings would undoubtedly hearten the SDCEA, which has, for years, been stymied from monitoring and testing air quality levels in the polluted South Basin area of Durban’s harbour because the National Key Points Act has been invoked to protect the financial interests of oil companies there, among other reasons.

In her report Madonsela noted that the National Key Points Act was “inexplicably dragged in halfway through the implementation of the Nkandla Project” – and even then, its provisions were not complied with. “Neither was there compliance with the contents of the declaration of the Nkandla residence as a national key point, as signed by the minister of police on 08 April 2010,” noted Madonsela.

While Mthethwa “failed to properly apply his mind” in declaring the home a national key point, all the ministers of public works, from Geoff Doidge to the incumbent (and former South African Democratic Teachers’ Union heavyweight), Thulas Nxesi, “provided incorrect information” to her investigation.

Various officials from the departments of public works, defence and the police also appeared in need of a crash course on bits of paper ranging from the Public Finance Management Act to the country’s founding document, the Constitution. 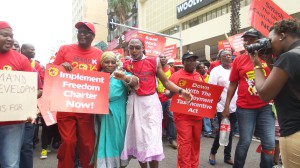 Former Cosatu general secretary Zwelinzima Vavi, meanwhile, was at the front of the march in Durban, laughing, dancing and singing all the way to City Hall.

Dressed in a Numsa T-shirt, red pants and a red peak cap, Vavi would go on to address the march from the steps of the building. But before he did, he shared a joke with the thousand-strong crowd about some red berets in the audience. It turned out they were Numsa red berets, not those of Julius Malema’s Economic Freedom Fighters. Vavi called for one to be passed forward; when it got to him, he took off his peak cap and put on the beret. The crowd cheered and laughed as he began his speech. 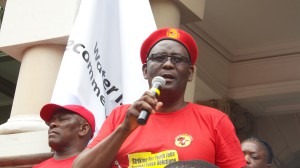 Vavi rattled off a number of statistics to illustrate that unemployment and poverty were actually worse now than in 1994. He also addressed the urgent need for the transformation of the economy, land ownership and people’s lives, which pointed to his – and Numsa’s – fallout with the mainstream Left, which is represented by an increasingly nationalist ANC and Stalinist SACP.

“The people who benefited most in the past 20 years have been our bosses, the capitalist class,” said Vavi, “not us workers.” “South Africa today is the most unequal country in the world,” said Vavi.

He described the crisis of poverty and unemployment as a “ticking time bomb”. “We see that bomb exploding in our townships every day,” he said. “The bomb … is exploding as we speak.” “We want nothing short of the full implementation of the Freedom Charter,” he said. Vavi, who had been carrying a sign that read “Implement Freedom Charter now” during the March, said: “The wealth of the country must be shared by all its people; the land of this country must be shared among all its people.” 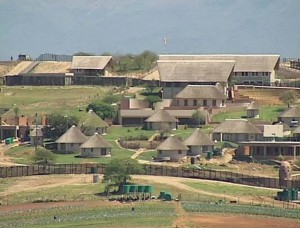 The Freedom Charter is little more than toilet paper in the homes of people with “golden toilets”.

While no mention was made in Madonsela’s report of cisterns filled with Chanel No 5, one does wonder if the Nkandla throne room is made of shiny gold bars – especially large for the Big Man’s rump.

The report found that: “The standards of ethical conduct set by the provisions of section 96 of the Constitution and the Executive Ethics Code require of a person in the position of the president to have been concerned about the obvious elaborate scale of the project that was being implemented at his private residence and the cost thereof to the state.”

“[Zuma’s] failure to act in protection of state resources … amounts to conduct that is inconsistent with his office as a member of Cabinet, as contemplated by section 96 of the Constitution,” it continued.

And Zuma was a bit of a naughty boy when he told Parliament last year that his family had not benefited from the state’s coffers, which was blatantly untrue. “It is common cause that in the name of security, government built for the president and his family in his private residence a visitors’ centre, cattle kraal and chicken run, swimming pool and amphitheatre, among others. The president and his family clearly benefited from this,” the report found. 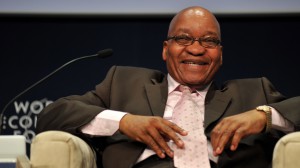 Numsa’s KwaZulu-Natal regional secretary Mbuso Ngubane, meanwhile, addressed the crowd in Durban after Vavi and laid into Zuma because of the findings of Madonsela’s report on Nkandla.

Ngubane said that the money spent on the youth wage subsidy should be spent on creating “decent jobs” and “better education”. “In South Africa poverty has a colour, and its black,” he said.

Ngubane called on the ANC government to take “bold steps” and nationalise key areas of the economy. He argued that South Africa couldn’t continue to export its valuable mineral resources anymore and that these resources needed to benefit the South African people.

This is perhaps what the executive had in mind when it set out on an Nkandla project that the Public Protector deemed “opulent”, “unconscionable” and “appalling” in its execution.

But spare the president a thought, before thoughts turn to new revolutions and nationalising Nkandla for South Africa’s own “golden toilet moment” of reappropriation.

He also had to deal with builders: “The fact that he complained on more than one occasion of the lack of progress made with the project and the impact that it had on his private life and that of his family clearly shows that he was aware of the measures taken and the status of implementation,” the report stated.

We all know what builders are like − which may explain why former deputy public works minister Hendrietta Bogopane-Zulu was found by Mandonsela to have been involved “at trench level”, where she was “making suggestions on how to meet perceived security needs”.

It’s hard to get a good builder these days – especially for the country.

All pics from Numsa’s Durban march by Lloyd Gedye