From the time a girl enters puberty until the age men stop seeing her as ‘desirable’, the idea that her body is not her own is systematically imposed on her. On any given day, as she moves from A to B, she will have to fend off unwanted attention, she’ll be whistled at, grabbed, groped, insulted for not responding, and, in some cases, the attack becomes serious. For many men, there is just no desire to see street harassment as harmful – it is just harmless fun, and is often perceived as doing women the favour of complimenting them. But harassment on the street is nothing less than an attack on women’s bodies.

Jen Thorpe, feminist writer and editor of My First Time and FeministsSA, says street harassment is about men exerting dominance over women in public spaces.

“Street harassment is a manner in which chauvinism and patriarchy are forced into the public space. They are actions done by men to remind women that they don’t own those spaces – those spaces are not for them,” says Thorpe.

This type of behaviour usually thrives in a heteronormative context – heterosexual men whose harassment is directed towards women. Such behaviour has become normalised to a large extent, and many men see no problem with it.

Lebohang Masango, a poet and feminist writer who goes by the moniker Nova, thinks that part of the reason men see street harassment as chivalrous has to do with their upbringing. “One perspective within many black cultures, which men are socialised into, is that an African man doesn’t let a beautiful woman pass by without appreciating her,” she says.

But common to cultures across the race boundary is the belief that men have the right to exercise autonomy over women and their bodies – a belief that betrays itself most evidently in the behaviours that permit rape culture’s existence.

“A large problem is that men don’t understand the lived experiences of women,” says Nova. “Street harassment occurs in such a way that it often becomes forceful and it causes anxiety and stress for women, and then it moves from wanting to tell women that they are beautiful and desirable to being abusive.”

Men’s failure to empathise with women is also because the harassment is not really about the women themselves. It is about male sexual entitlement and it is about performing manhood – perhaps more for the sake of other men than for women.

“It’s 100% a performance for each other,” says Nova. “Manhood is a performance about who is stronger than, better than, richer than. It’s so pervasive that you never operate from the essence of yourself. I don’t understand the dick measuring”.

Feminist blogger Feminsta Jones recently started a campaign called #YouOKSis? to raise awareness about the experiences of black women who are harassed on our streets. Organisations such as Stop Street Harassment have co-ordinated campaigns internationally during International Anti-Street Harassment Week (March 30 to April 5), while HollabackPHILLY in the United States has taken its campaign to the interiors of subway cars, platforms and bus shelters across Philadelphia.

Jones’ campaign points to class factors in street harassment, and these are also prevalent in South Africa. “Who is in the street in the first place? It is usually a particular class of people whose only option is often to walk in spaces where they are likely to be harassed,” says Thorpe. “Another question is what [kinds of] spaces are hotspots for abuse.”

In South Africa, black women are more likely than white women to use public transport and to walk on the streets. Nova agrees that although every class of woman experiences harassment, “street harassment has its tax bracket, and that’s messed up”.

Walking down a street becomes an exercise that must be carefully thought out. It shapes the way in which a woman dresses, moves, and how she relates to others in public spaces, even after the fact. This is its most problematic aspect, because it limits her agency and ability to exercise her freedom.

“Street harassment is really powerful because often the impact is felt long after women have left these spaces,” says Thorpe.

But in those spaces they are more likely to be harassed if they refuse to interact with the offending men. In South Africa, Thorpe thinks a hotline similar to the Rape Crisis line would help women process what they have experienced. “Possible ways in which we can help women cope with it is through introducing an SMS line where they can talk about their experiences,” she says. Thorpe adds that this type of intervention could be complemented by consciousness-raising efforts directed towards and involving men.

But the flip side of activism efforts is the possibility that men are absolved from the responsibility of changing their own mindsets and, consequently, their problematic behaviour.

“There must be a holistic way to address the issue, and it must include men. There must be multiple interventions happening at the same time,” says Thorpe.

Nova suggests that to effectively raise consciousness, the government would have to get involved in a meaningful way, and visibility would have to be so huge that men could not ignore it if they wished to. One of these ways, she says, would be to introduce billboards and infographics that problematise unwanted advances, while at the same time educating men on what is acceptable and what isn’t.

“I am very aware that you give out info and people often choose to ignore it, because it all comes down to choice,” Nova says. “But I do think we should make the awareness so in everyone’s faces that they get sick of it – that they start to want to introspect on their behaviour and see street harassment as a social ill.”

As Jones and others have demonstrated, social media is a potent way to rally people to activism, and women to sisterhood. Nova and Thorpe agree that although the medium presents some difficulties, it also presents potential for great work to be done. And there’s a lot of work to be done.

“I can’t suffer in silence,” says Nova. “I can’t look the bullshit in the eye and still be the same. I’m tired as hell because every day it’s something [new], but even if all I can affect is one person at a time … even that’s important to me.” 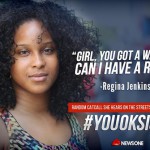 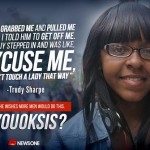 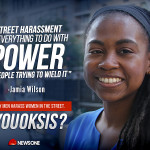 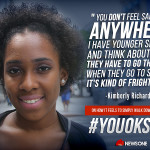 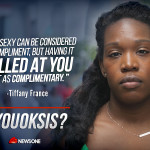