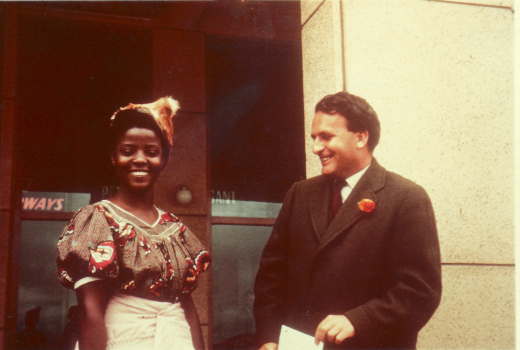 Percy Zvomuya celebrates the thoughts and texts of groundbreaking historian Terence Ranger, who died on 2 January 2015

In 2004, after Terence Ranger had delivered a paper at the Wits Institute of Social and Economic Research (Wiser), I went up to him to greet him, make a few comments about his lecture and introduce myself as Zimbabwean. I know, he responded.

Ranger’s paper, “Historiography, Patriotic History and the History of the Nation: the struggle over the past in Zimbabwe,” was one in which he critiqued the use of history by Zanu PF. The lecture came at the moment when the arc of the social and economic crisis had taken a sharp, jagged turn into the unknown and Zimbabwe’s history, and Zanu PF’s principal role in it, had become handy and expedient.

“There has arisen a new variety of historiography which I did not mention in my valedictory lecture. This goes under the name of ‘patriotic history’. It is different from and more narrow than the old nationalist historiography, which celebrated aspiration and modernisation as well as resistance. It resents the ‘disloyal’ questions raised by historians of nationalism. It regards as irrelevant any history  which is not political. And it is explicitly antagonistic to academic historiography,” Ranger argued.

The two books, which the more literate of the nationalists must have read and re-read,  came out a critical juncture in the nationalist struggle: in 1963, Robert Mugabe and others had broken away from Zapu to form Zanu; in 1965, Ian Smith had announced the Unilateral Declaration of Independence; because of Smith’s intransigence, armed struggle had been adopted and, in 1966,  the first shots had resounded in the limestone and dolomite country of Chinhoyi.  The two books were useful not only in understanding the heroic past of struggle and revolution but, also, how that 1896-97 war against the British settlers and its mythic protagonists – Nehanda, Kaguvi and Murenga – linked up with the nationalist present fight. The name Zimbabwe, coined by nationalist Michael Mawema, after the majestic stone walls in Masvingo, was part of this reclamation of a great romantic past of empire and its attendant monuments. Although the Great Zimbabwe monument pointed to a fully-fledged civilization, its sophistication and neat geometries were of no use at that point. What they were looking for in their past was mess and gore, the battle axe and the shield, in other words,  revolutionary violence.

Writing Revolt: An Engagement with African Nationalism (Weaver Press), Ranger’s memoir of his time in Rhodesia before he was deported by Smith’s government in 1963,  came out in 2013. In the preface, Ranger wrote, “this book is about a primitive stage of Zimbabwean historiography. It is also about the ways in which politics and history interacted. The men I discussed history with were the leaders of African nationalism; my seminar papers were sent to prisons and restriction areas. Both they and I were making political as well as intellectual discoveries.”

He then made a provocative comparison with another colonised people, neither Asian nor African, but European. “I had worked previously on Irish history. Now I found again a context in which history was too much important to be left to historians.”  The hegemony of patriotic history, the way that history has been abused and misused,  has also taught us that history is too, too important to be left to politicians.

Robert Mugabe plays a starring role in these narratives; he has, naturally enough, made the most use of this patriotic history. Ranger, writing about Mugabe in the aftermath of his arrival from Kwame Nkrumah’s Ghana in the early 1960s, observed that “Mugabe was new to us and lying low in the National Democratic Party (NDP)”.  The NDP is one of several nationalist parties that was formed and banned by the Rhodesians.  “We watched him closely to try to pick up some clues.” They saw a “rare playful moment” at a dinner table one evening. After wolfing down his food, Mugabe turned to his friend and fellow nationalist Leopold Takawira, and said, “I am surprised at you, Leopold. As a good Catholic you are eating meat on Friday.” An “upset” Takawira pointed out that Mugabe himself had also eaten meat. “Ah, but I am not a good Catholic.”

Ranger’s oeuvre is vast and stirring. If his early works easily fell prey to the machinations of the nationalists, his later works were much more sophisticated. There are the early works Revolt in Southern Rhodesia, 1896-97 (Heinemann) and Peasant Consciousness and Guerrilla War in Zimbabwe: A Comparative Study (James Currey). Co-edited with Ngwabi Bhebhe is the book Ranger titled Soldiers in Zimbabwe’s Liberation War (James Currey).  He also wrote a portrait of a very political family, the Samkanges,  titled Are We Not Also Men? The Samkange Family and African Politics in Zimbabwe, 1920-64. (James Currey). There is another collaboration with Bhebhe, again as co-editors,  Society in Zimbabwe’s Liberation War ( James Currey).

Most of his work, even though national in scope, had a northern Zimbabwean slant. But in his later years, he took a decidedly southern outlook. The first of these books was Voices From The Rocks: Nature, Culture and History in the Matopos Hills of Zimbabwe (James Currey) and with his two students, Jocelyn Alexander and JoAnn McGregor, Violence and Memory: One Hundred Years in the ‘Dark Forests’ of Matabeleland (James Currey) and Bulawayo Burning: The Social History of a Southern African City (University of Western Cape). Then there was, with Eric Hobsbawm, the celebrated tome, The Invention of Tradition (Cambridge University Press), a co-edited book that showed how “continuity with the past” is constructed by use of rituals, symbols and practices, how some of the things we view as  traditions are, in fact, invented.

A former schoolmate once described Ranger as an “ordinary boy”, so ordinary, in fact, that he failed his mathematics, was dismal in French, and failed Latin so frequently that he went to Oxford a term late. Not that he was any better in the sciences, a faculty that would have been useful in his father’s electro-plating factory.  So how did an ordinary boy collaborate with some of Europe’s most formidable minds? How did he stake out a ringside seat as witness to the first stirrings of African nationalism? How did he become midwife to generations of exceptional historians? How did he do it? Well, for starters, he had a brain for literature and history.

“My parents gave me what I needed to feed on – countless holiday visits to cathedral towns and castles, and a reasonably well stocked library at home (which contained most of Dickens, for example),” he wrote.

Ranger’s  education on Africa, if we are mad enough to conscript some of the racist writings of Rudyard Kipling, Rider Haggard and Joseph Conrad as being about Africa,  hadn’t exactly  prepared him for his career.  “I have often thought about the odd effects of such a literary education which has left no trace on my adult responses to Africa. We did not know any Africans personally; there were no African boys at Highgate School, though there were Greeks and Armenians and German Jews.”

Oxford, of course, would not educate him about Africa. “The core of the History Honours syllabus was a continuous knowledge of English history. I heard about Africa only in the context of Prince Henry the Navigator.” His graduate supervisor, Hugh Trevor-Roper, would gain notoriety in African/Africanist circles when he said, “Perhaps in the future there will be some African history to teach. But at present there is none, or very little: there is only the history of Europe in Africa. The rest is largely darkness.”

Yet it was also at Oxford that he met one Carl Rosburg, who was researching and writing on the history of the Mau Mau, work which would culminate in the book, The Myth of “Mau Mau”: Nationalism in Kenya.  “Like all proper young Englishmen I regarded Mau Mau as the height of barbarity, and I was astonished when Rosburg insisted that it was instead a rational nationalist movement. A few years later it was Rosburg who introduced me to the Southern Rhodesian African nationalist leaders.”

Before deciding to settle in Africa, at the age of 27,  Ranger almost accepted a position at a university in Malaysia. But he happened to read a piece in The Times by Basil Fletcher, then vice-principal of the recently opened University College of Rhodesia and Nyasaland (now University of Zimbabwe). “The college, its copper roofs gleaming in the sun, was a beacon of hope between the white nationalism of South Africa and the black nationalism of East Africa. It stood for partnership and multi-racialism. At once I decided that this was the place for me.”

The rest, as they used to say, is history.

If Ranger’s life is an object lesson for whites, those born on the continent or arrivants, then it is perhaps in how he arrived in Africa and then, as in the cliché, he set out to find himself and steered clear of the play of stereotype and received routine. “I was a married man with two-thirds of a doctoral thesis written. But there was a lot I did not know. I did not know whether I had physical or moral courage; whether I could bear being wildly unpopular; whether I could take –or follow – a lead; whether I could throw myself into a cause; whether my historical imagination could expand to embrace a whole new civilization.”

Ranger has now gone. He is not only a chief protagonist in the invention of a  tradition and a mythology, but a whole historiography. When his historiography had been exploited by the Zimbabwean state, he was one of the first to revise and interrogate his initial ideas. Not that he should have done so because a new generation of Zimbabwean historians, some of them his students, were at hand to critique their teacher.

Jesus, that good Nazarene, in his attempt at disrupting the student-teacher hierarchy, once said that the student is not above the teacher, but everyone who is fully trained will be like their teacher. And one of Ranger’s most fascinating students is Sabelo Gatsheni-Ndlovu who, like all good students, has up turned Ranger’s early nationalist historiography on its own flag-bedecked head. Writing in the introduction of his Derridean book, Do Zimbabweans Exist?, Gatsheni-Ndlovu argues that his work’s aim is to transcend studies “in the service of nationalism” by scholars such as Ranger, David Martin and Phyllis Johnson. “These texts were easily appropriated by the Harare regime because they celebrated nationalism, painting a false impression of nationalist actors as heroic figures and selfless people who genuinely worked and died for the masses.”

In Ranger, politics and history, nationalism and scholarship, intersected in a jagged geometry rarely seen.

Zimbabwe, Africa, will forever be in his debt.

2 Responses to “Terence Ranger and the Jagged Geometry of Zimbabwe”