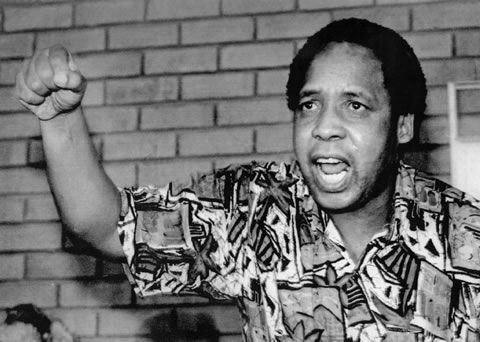 Last week, the Pretoria High Court ruled that Jansz Walus, who murdered South African Communist Party leader Chris Hani almost 23 years ago during the Easter weekend, should be granted parole from his life imprisonment term. In this edited excerpt from Hani: A Life Too Short (Jonathan Ball Publishers) by Janet Smith and Beauregard Tromp, the minutes leading up to Hani’s assassination – and the painful scars on his family – are made clear

Janusz Walus stared straight at Limpho Hani, the widow of the man who he shot dead on 10 April 1993, when he uttered these words during his initial murder trial. When he hovered over Martin Thembisile “Chris” Hani and fired a shot to the liberation fighter’s head on that fateful day, he hoped to extinguish the flicker of freedom in the hearts of a nation.

This was war- and it was profoundly personal. Hani’s beloved 15-year-old daughter Nomakhwezi had been present when the gunshots rang out. “Hey daddy, he’s greeting you,” the Sunday Star of 11 April reported her as having said when she saw Walus approaching. These words cut to the bone, although later there was hesitation about what had really happened. Nonetheless, the country wept.

Later on, after her father’s killers were sentenced to death, Nomakhwezi said in an interview that she felt she was robbed. “I miss him very much. Some days I feel he has just gone overseas and one day he will come back. And some days you tend to believe he is gone, but I have not accepted that he is dead.”

Her younger sister, Lindiwe, said in the same interview in the Sunday Star that she couldn’t understand why Walus had to come all the way to South Africa to kill one black communist. “I am sure it makes no difference at all to him, but to me, it’s a world of difference.”

“I am a Catholic,” said Nomakhwezi, “and I believe there is a God, and He is supposed to be powerful enough to protect good people. It puzzles me that God did not stop these killers. My dad did nothing wrong to anyone, but God took him away. His crime was that he cared for people.”

On the morning of 10 April, Walus set out from leafy Muckleneuk, in the shadow of the Union Building in Pretoria. The Shotokan karate enthusiast claimed he was heading for the Stan Schmidt Centre in the vicinity of Bramley, Johannesburg, but found it closed as it was Easter Saturday. So he drove on to the Gun Exchange in Corlett Drive nearby, emerging with 25 rounds of 9mm subsonic ammunition.

He said that the morning journey had been planned to take a final look around the Hani home, which was situated on a gentle curve where few other houses were in view of its secluded driveway. But, as he pulled up close to the house he now knew so well, Walus saw that Hani was leaving home. On impulse, Walus said, he followed him.

Whether by coincidence or design, Hani was without his bodyguards. The air was fresh, the morning still. It was a holiday and few people were around. On his tail, Walus saw that Hani wasn’t going far, mere blocks away to the local strip mall. So when he saw that Hani had stepped into a café, probably to buy a newspaper, Walus realised he did not have much time if he was finally going to do it.

“At that moment I decided it would be the best opportunity to execute my task and that this opportunity would never be repeated,” Walus admitted. “I decided not to do it in the shopping centre because there were a lot of people.”

Walus quickly veered off on a different route back to Hakea Crescent so that he would arrive just before Hani returned in his Toyota sedan. A former rally driver, Walus got to the house only a couple of minutes before Hani. He quickly pulled on his gloves, and armed himself. He was ready.

“I put the pistol in the belt of my trousers behind my back. Seing Mr Hani move away from the car I did not want to shoot him in the back. I called to Mr Hani. When he turned I. . . fired the first shot into his body. As he turned and fell down, I fired a second shot at his head.”

Nomakhwezi’s gaze had fallen immediately on the terrible scene, at the same time as Retha Harmse, who was driving past slowly in her car. By the time the two realised what was happening, seconds after Walus took aim, it was already too late. It was over.

Since no one had heard the shots — Walus having used subsonic ammunition — there was confusion initially. But it didn’t take long for people to realise what had caused Nomakhwezi’s desperate sobbing.

As the neighbours rushed to the house, they saw Hani, lying in a thick pool of his own blood in the driveway. And so the wailing started there in the crowd gathering on the neat paving of the house in the small suburb. By evening, grief had overcome the nation. Chris Hani was dead.

“What child should witness such a barbaric crime? . . . I want to be with him just one more time,” Nomakhwezi confided in a private piece, which was read out for the first time at her own funeral, by her younger sister, Lindiwe. Nomakhwezi died, apparently from an asthma attack, in 2001.

Nomakhwezi Hani is buried at the feet of her father in the Boksburg cemetery.

Beauregard Tromp is a journalist who has covered conflicts and wars in countries including Burundi, Sudan, the Democratic Republic of Congo, Egypt and his native South Africa. A 2013 Nieman Fellow, Tromp is a past winner of African Journalist of the Year as well as South African Journalist of the Year. A visiting Knight Professor at the University of Miami, he helped lead a team of multimedia journalists documenting 20 years of democracy in South Africa. More recently he was singled out for his coverage of xenophobic violence in South Africa, where he produced a series detailing the historical and contemporary social events leading up to the brutal killing of a Mozambican national. He is currently working with the 19 Million Project to identify innovative, tangible interventions to assist with the migrant ‘crisis’. Tromp is the co-author of the bestselling biography of iconic freedom fighter Chris Hani. Reporting for both newspapers and television, his work has appeared in Independent Newspapers titles, the pan-African e-news Africa television station and he is currently the news editor of the Mail & Guardian in South Africa. View all posts by Beauregard Tromp →