This century has seen an incredible proliferation of fiction which uses the noir templates of tormented gangsters, crooked cops and unhappy endings to interrogate political and sociological issues. The paranoid works of James Ellroy and David Peace map the seedy underworld of the Cold War and the rise of neoliberalism. Epic novels like Roberto Bolaño’s 2666 and Marlon James’ Booker prize-winning A Brief History of Seven Killings explore the post-colony through the lives of its bad people. And clearly, television shows like The Wire, Breaking Bad and The Sopranos are the great contemporary tragedies.

The comic book medium has also reflected this trend. Writers such as Garth Ennis and David Lapham have investigated everything from personal dysfunction to geopolitical corruption. Violence and aberrant behaviour have all been key themes in the work of Kansas-based Jason Aaron, one of the finest writers in comic books today. His work on creator-owned titles like Scalped and Southern Bastards, and on books like Thor, Wolverine and Star Wars are characterised by a winning combination of fucked up situations, vivid characterisation and black comedy. As a writer from the modern American South, many of his themes resonate directly with the South African experience – the violent weight of history, toxic masculinity and religious fundamentalism, dead-end towns which offer no escape. But while touching on such weighty topics, his work is never dour. Eschewing simple good vs bad narratives, his dark plots are always brightened with subtly unhinged humour.

Aaron was one of the international guests at this year’s FanCon in Cape Town. The event was a massive success, as it was the first SA convention to bring out big creators from America and the UK, alongside a wide array of local talents. Joining Aaron were the likes of British artist Jamie McKelvie who draws the excellent series The Wicked + The Divine, set in a world in which pop musicians are literally gods (it’s a must read for anyone who misses David Bowie and Prince). The success of the convention highlighted how the comics medium is undergoing a major creative renaissance. This is evidenced in diverse new stories, the increased prominence of female writers and artists and a general progressiveness in both theme and style. An indicator of the time was seen in a feature by the UK Guardian this year which proclaimed, “like great punk singles in 1977 or great house records in 1988, a great new comic book comes out every week.”

Aaron’s work is indicative of this boldness, twisting pulp archetypes and situations into dramatically vivid stories

Aaron’s work is indicative of this boldness, twisting pulp archetypes and situations into dramatically vivid stories. He was kind enough to agree to an interview, and in between my enthused fanboy rantings, offered some great insights into his process and influences. His big break as creator was with 2006’s The Other Side (illustrated by Cameron Stewart), a mini-series about the Vietnam War told from the dual perspectives of an American marine and a North Vietnamese solider on the Ho Chi Minh trail. This surreal look at the horrors of war had a direct personal relevance for Aaron. “My cousin was a big influence – Gus Hasford, who wrote the book Short-timers which the film Full Metal Jacket (adapted by Stanley Kubrick in 1987) was based on. It’s a very dark book, based on his experiences in the Vietnam War.” Hanging out with Vietnam vets and former war correspondents exposed him to the complex reactions people have to extreme situations. Aaron continued, “The stories they would tell were really hilarious. Sometimes they’d tell stories that are tragic and dark, mostly they would laugh. You’d sit around hearing them tell stories about this really dark troubling time in their lives. I’d always find that interesting – how you could find humour out of things that are terrible.”

In 2007, he launched Scalped. Atmospherically drawn by Spanish artist R.M Guera, the series began with a focus on troubled FBI agent Dashiell Bad Horse, who is grudgingly forced to return to the Prairie Rose Indian Reservation. Initially marketed as a gritty crime tale, the series quickly grew into something more expansive. ”I don’t know if I’m attracted to crime as much as I am to certain kinds of characters and certain kinds of stories. With Scalped, I wanted to tell a noir story about an undercover FBI agent, who is a deeply flawed guy, who was his own worst enemy and had always run away from who he was and where he came from and then was forced to have to deal with that. The idea to set it on an Indian reservation seemed like a natural thing to do, and was a story I hadn’t read before. You want to do something that stands out, that no-one else was doing.”

Over 60 issues Scalped grew into a veritable masterpiece. It has often been compared to The Wire in terms of its scope. In the same way the show used the criminal underworld to tell the story of Baltimore the city, Scalped becomes the story of Prairie Rose (“a third world nation in the heart of America,” as someone puts it in the first issue). While telling a focused narrative about Dash and his complex relationship with local crime boss Lincoln Red Crow (a man prepared to kill as many people as necessary for his twisted vision of social upliftment), it deals with everything from the dispossession of Native Americans to drug addiction, homophobia and mysticism. Underneath all the carnage and mayhem is a hard-won humanism, as even some of its most twisted characters are revealed to be nuanced individuals. There is a deep vein of black humour coursing through the series. “Richard Pryor was a master of that. He had a terrible childhood, terrible upbringing, but he could get you to laugh at that. With Scalped, it’s a dark book, it’s not full of laughs. Neither is Southern Bastards but there is humour within it. I want all my books to have some laughs.” 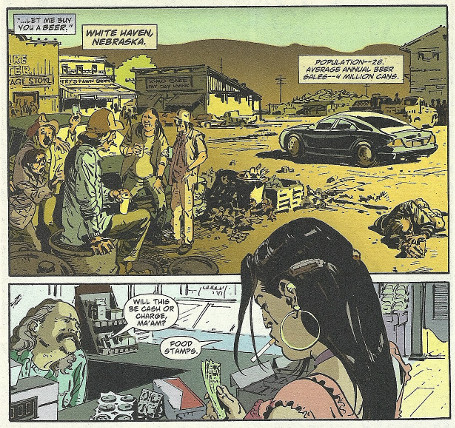 Aaron considers Dash to be possibly the most tragic character he has created to date. “His story has a very tragic ending which seems pretty inevitable. From the get-go that’s where he was headed.” But he’s also capable of writing some absolute monsters, like Scalped’s Mr Brass, an urbane and utterly psychotic Laotian gangster. “I’ve created some real bastards,” as he enthusiastically put it.

His creator-work lead to writing jobs for Marvel comics, where he has put his stamp on heroic characters like Wolverine, Thor and Dr. Strange. The felicity with writing real bastards also lead to him interpreting Marvel’s supreme villain Thanos, who was originally created by Jim Starlin. “I didn’t create him or his origin story, but I wrote a mini-series which was kind of filling in the blanks… It was a lot of fun getting into the head of a cosmic mass murderer.” Thanos, an alien space bastard in love with the physical avatar of Death, is set to be the main antagonist in the upcoming Avengers: Infinity War films. I really hope they work some aspects of Aaron’s interpretation of the character into those blockbusters, as it will add a feral dimension of twisted psychology into the action.

He also took on the bold task of continuing Garth Ennis’s work on The Punisher. The character was originally created to cash in on the vigilante cinema trend in the 1970s. In the original story New York City cop Frank Castle’s family is killed by the Mafia, legitimising his endless murder rampage against criminals. In his run, Ennis deconstructed Castle, presenting him as a dangerous killer created in the Vietnam War, before finding a motivation to continue his war at home. Punisher: Max is a psychologically and politically complex work, and Aaron relished the chance to continue it. “It was daunting because that’s one of the greatest runs anyone has ever done for Marvel… But at the same time as a creator I was excited to step up to the bat. I’m not Garth, I had to do something different.” From Ennis he took the idea of Castle as an embodiment of the American war machine, who cannot stop. “He was already that guy. The idea that he came back home and was content with flipping burgers in the backyard and happy with his wife and kids, and everything was perfect and sunny until the day they died – that didn’t make any sense. He wasn’t a guy who could just flip that switch.”

Aaron has talked about his love of Bruce Springsteen, and his version of Castle feels like one of the criminal characters from Nebraska or The Ghost of Tom Joad – straight life is like a life sentence, and he subconsciously wishes for the trauma that will free him from the restraints of law and conventional morality.

Alongside his Marvel work, Aaron is currently working on Southern Bastards, with Jason Latour and The Goddamned, again with R.M Guera. Set in Alabama, Bastards focuses on Craw County, ruled by a warlord-like American football coach. Pitched somewhere between William Faulkner and The Coen Brothers, Aaron and Latour also make some potent broadsides against white supremacy. Issue 10 featured a variant cover of a dog ripping the Confederate Flag to shreds, the proceeds of which were donated to the victims of the racially-motivated Charlestown shootings.

Meanwhile, The Goddamned takes a jaundiced look at the origins of monotheistic religion. Currently on its first story arc, it reinterprets The Book of Genesis in a “a very dark and noirish way.” Focusing on a conflict between Cain, the first murderer and Noah, the story is a culmination of Aaron’s fascination with religion, and the terrible things people do in its name. “Religion has run through most everything I’ve done. That speaks to where I grew up in a small town in the American South. In a very conservative, religious community. I don’t have that faith anymore but I’ve always been fascinated by religion and the stories of religion. If anything I’m more fascinated by it now that it’s not really a part of my life anymore… As for any greater meaning that depends on what you take from it. If anything I just love those bible stories and wanted to do a straight version of them. The Flood is a dark story and if anything we lean right into it.” In the Antediluvian world of The Goddamned, God is a “very real presence” but that does little to reign in humanity “They have seen him, or at least seen direct evidence of him, but still they don’t give a fuck. We’re gonna make the world so awful that he’s probably going to come down and kill everyone. That to me is fascinating.”

Scalped and Southern Bastards are both in development as television series. Although he was not at liberty to discuss them, they are sure to bring his work to an even wider audience. But Jason Aaron views himself as a comic writer first and foremost “I’ve got a notebook full of creator-owned ideas, which I’d like to do at some point. It’s just a matter of ‘I only have so much time’. And the question of finding the right person to do it with. By the time I die I’d like to try every genre.”