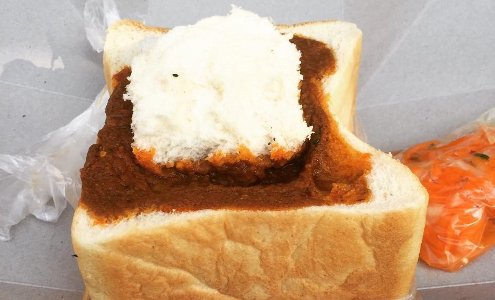 The bunny chow, arguably the most iconic Durban street food and recently making waves in hip circles in the UK and the US, is at its heart a communal, working-class dish, meant to be shared with another person. However sharing a bunny is an esoteric art with lots of unwritten rules and etiquette – an etiquette that people eating their “reimagined” brioche or sour dough bunnies in London or New York may not be aware of. Pravasan Pillay lets you in on some of the things you should know before inviting your friend over to split a half-mutton.

1. The first thing to do, once the bunny has been bought, unwrapped and you and your dining companion are seated or alternatively leaning over a makeshift table on a warm car bonnet, is to tear the bunny plug into two equal parts. The plug – for those unaware of bunny chow nomenclature – is the fluffy, curry-soaked bread used to cap and seal the dish. It consists of the scooped up insides of the bread loaf, and is a kind of delicious starter to the main course. I think we can all agree that it’s, uh, poorly named.

2. A bunny should always be consumed by breaking off small pieces from the top of the bread wall evenly on all four sides – all the while using said pieces to scoop up the rich curry filling. Eating in this way maintains the structural integrity of the bunny chow, preventing it from collapsing in on itself, like an RDP house, and the contents subsequently leaking out. This is quite easy to manage when eating by yourself, but when you introduce another player into the game, it becomes a delicate dance in which cooperation is of the utmost importance. It’s crucial that both of you eat at roughly the same pace and that you stick to your designated sides of the bunny – your designated sides being the one directly facing you and the one to your right. Corollary: You should never share a bunny chow with a left-handed person.

Corollary: You should never share a bunny chow with a left-handed person

3. It also goes without saying that a bunny chow – whether shared or solo – must always be eaten with your hands and not with cutlery. I am looking at you, Caucasians. It’s admittedly messy but immeasurably more effective in breaking down the bunny and portioning out perfect-sized bites. Also, keep in mind that if your fingers and the fingers of your co-diner accidentally touch at any point during the meal, it would be totally awkward, so avoid at all costs. Finger touching also means you are now obliged to marry them, according to ancient Sanskrit law.

4. If you’re a regular bunny chow consumer, you will be well aware of the Salad Dilemma, i.e. it’s literally impossible to eat your bunny without the carrot salad running out a third of the way through. It doesn’t matter which takeaway you buy your bunny from, you will always be given a hopelessly insufficient serving of salad as a side. It’s like the takeaway owners think that each piece of grated carrot is a strand of saffron or mermaid hair. Of course, the problem is compounded when there are two of you. In order to avoid the very real chance of an argument over the division of this pitiful side, I strongly suggest doing the classy thing and declining it. Alternatively, you could buy twelve separate bunnies and scrape together all the salads that accompany them into one big pile. This should be an adequate amount to see two adult human beings through one bunny chow eating session. Unfortunately, the eleven surplus bunnies will have to be binned, but this is a small price to pay for salad satisfaction.

5. The only acceptable sodas to drink with your bunny are Stoney Ginger Beer, Coo-ee Iron Brew, Sparletta Sparberry or Creme Soda. If your dining partner requests a different beverage, then perhaps it’s time to review whether it’s actually worth eating a bunny with this asshole. A dining partner should also be rejected if they – though this is admittedly rare – for some ungodly reason want to order a brown bread bunny. A proper bunny is always made with good old-fashioned unsliced white bread. The reason why white bread is best is because it has the perfect level of porousness. This porousness will allow the curry to properly soak into the bread, creating a gelatinous-like hybrid of curry and bread. It’s this almost melted-bread consistency that is one of the key factors that make bunnies so tasty. I’m going to stop describing this now, as the saliva dripping onto my keyboard may cause a short-circuit.

6. Occasionally, when you’re sharing a mutton bunny you will encounter a large piece of mutton or a gravy-soaked potato that equally straddles both your and your co-diner’s halves of the bunny. Thus ownership is unclear. In the absence of judicial appeal or some kind of bunny tribunal, we are left in a grey legal area. This has never been a complication for me, as I have a foolproof practice: Distract your dining partner with a diversion like a small explosion or a musical performance by a specially-hired vuvuzela soloist and discreetly pocket the disputed mutton piece for later consumption once his or her head is turned. Your dignity remains intact, and the pocket of your cargo shorts only slightly ruined (Incidentally this is probably the first time in history that the words ‘dignity’ and ‘cargo shorts’ have been used together in the same sentence). Of course, you can avoid this thorny etiquette issue altogether if you order a sugar beans bunny, with its uniform, egalitarian morsels per bite. The only problem with this is that it’s a sugar beans bunny.

7. Keep in mind that during this entire, intricate bunny sharing process, no words should be exchanged with your co-diner, as this is a solemn endeavour. An occasional grunt of satisfaction is permitted. The only time you are allowed to speak is once the bunny is completely devoured. At that point, you can move onto approved post-bunny chow conversation, i.e. why this bunny wasn’t as good as the one you get at your regular joint.