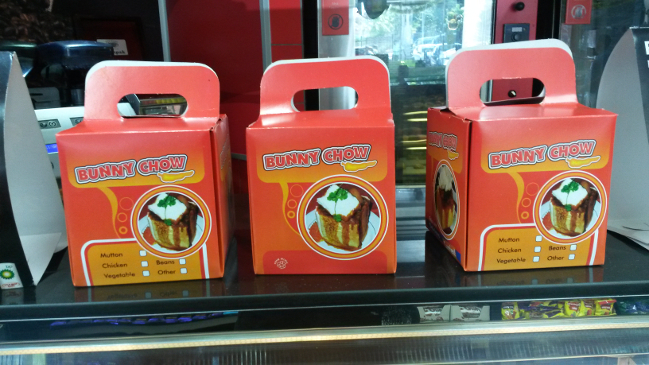 Pravasan Pillay samples a selection of food from some of Chatsworth’s takeaways, restaurants and market stalls.

I spent three weeks in my hometown of Chatsworth, Durban over the December holidays and apart from over-indulging in tonnes of home-made food and braais at my mother’s, friends’, and families’ homes, I also sampled a small selection of food from some of Chatsworth’s takeaways, restaurants and market stalls.

One of my first stops when I arrived was my perennial favourite vegetarian takeaway chain Kara Nichha’s, where I ordered a stack of their legendary ‘Special Sandwich’ – which I have written about before. The Special, as always, did-not disappoint. I also tried out their vegetable breyani this time around – it was mild yet flavoursome, and filling. Like all the food at Kara Nichha’s, it was affordably priced with hearty portions.

Next up was a visit to the popular Bangladesh Market. The food section has moved since the last time I was there two years ago. It’s now on the opposite end, in a permanent structure. I bought a spread of Indian traditional snacks, such as vadas, samoosas, goolgoolas, fish cakes, woorandas, polis, etc. from various stalls. They were all superb. But one savoury snack stood out: slices of deep-fried green banana in batter (4 for R10). They’re made by a mother and daughter team, possibly the only stall to sell exclusively vegetarian fare. The women are also the only ones who make roti right in the market, so they are not hard to find. I know fried green bananas can be a tad bland, but the batter was crispy and the banana itself had just the right amount of give. To my mind, the dish is all about textures, and this was spot on. I suggest eating it with a hot sauce or a spicy dip to liven it up a little. 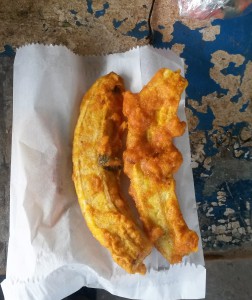 Another highlight was a jar of pudina chutney (mint pickle) I bought off a pickle vendor located about a third of the way into the market’s covered section. Pickles on offer are laid out in large Tupperwares, and the stall owner very kindly lets you sample his wares in the palm of your hand prior to purchase. He had a decent selection, including curried chillies, carrot, mixed veg, regular mango and sweet and sour mango, jalapeno, prunes, bor, figs and more. The stall owner offered me a spoonful of the pickle he claimed to be famous for, the “Special Sweet Sour Veg,” which was packed to the brim with goodies. It was very moreish, but, in the end, I decided to go with the pudina chutney or “Nuts Chutney” as it said on the label.

Pudina’s main ingredients are mint, peanuts, tamarind and chillies, but there is a lot of room for experimentation and individuality in the preparation. Much of the variation is due to its consistency. I’m accustomed to a very thick, pasty version that is made with a traditional Indian grinding stone, but the one I purchased at the market was much thinner, and probably made with a food processor. It looked kind of like a pesto. With a delicate balance between the mint and peanuts, it was super karo. I used this pickle to accompany most of the curry and rice meals I ate while I was in Chatsworth and the jar was empty by the time I left.

I visited United Fish & Meat located in Umhlatuzana, during the end stretch of my stay, to eat some of their fish and chips. United is primarily a butchery but it also has a cult takeaway by the name of United Fish & Chips. Everyone I know who has eaten there is convinced they are the only one who knows about its existence, but they all agree that their fish and chips is the freshest and tastiest in town. The fish – I’m pretty sure it was hake – presumably comes from the butchery right next door, which explains its freshness, and the well-seasoned batter is not too thick. The fish and chips portions (R40 for a medium) are very generous indeed. If I had to pick a fault, I would ask for a slightly bigger serving of their excellent tartar sauce. It’s a popular joint, so be prepared to wait a bit. I called ahead with my order and picked it up about a half hour later.

If you’re craving roti and are too lazy to make it yourself, I highly recommend buying a ten-pack of roti from Mohamed’s Roti & Take-Away, based in the Montford Shopping Centre (Unit 7). I ate their roti at least twice during my stay and it’s easily among the fluffiest and most addictive I have ever had. I would even go as far as to say that Mohamed’s makes better roti than my mother, all my aunts and all the neighbourhood aunties put together. I will most definitely have to go into witness protection after making that statement. A pack of ten large rotis will set you back R35.

Govinda’s Vegetarian Restaurant, situated in the Spartan basement of the beautiful and landmark Sri Sri Radha Radhanath Temple, is arguably the most well-known eatery in Chatsworth – competing perhaps with the Victory Lounge in the Chatsworth Centre. When I went, I saw a mix of tourists, Hare Krishna devotees, and Chatsworth residents. The menu is simple and wholesome, with a wide selection of vegetarian curries, breyani and some Western dishes. I ordered a thali comprising of three different curries – a potato curry, a tomato chutney with brinjal, and a “fish” curry consisting of soya wedges. I paid R70 for the thali, and ordered roti and pickle on the side, and jalebi for dessert. It was far more than I could eat. Everything was very good but the “fish” curry was my favourite, full of depth and sourness. The temple itself is well worth a visit, the gardens and fish pond moat make it a peaceful oasis in the middle of Chatsworth’s bustling business and shopping hub.

Banners and signs all around the B.P Express Chatsworth Service Station (4 Joyhurst Street) proudly proclaim the fact that it won 3rd place in the Durban Bunny Chow Barometer Challenge 2016. Third place in the entire city of Durban, which is – as everyone knows – overflowing with bunny joints, is a remarkable achievement, more so for the fact that the bunny-making-magic is happening in a B.P. garage, hardly your typical bunny takeaway. I visited the store on 27 December, a public holiday, and as I entered, I was immediately met by the tantalizing smell of curry, in what was otherwise a bog-standard, sterile-looking interior. I placed my order at the bakery counter and waited in line with several others for my quarter mutton (R59), which arrived shortly after. 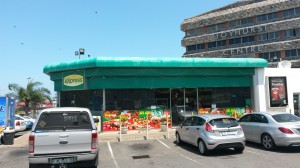 I can safely report that the BP Express’s Bunny Barometer award is most definitely deserved. Their mutton bunny was without a doubt one of the best bunnies I have ever eaten – and I have eaten a lot of bunnies. The curry was rich, complex and there was something extra there, a flavour or a spice I couldn’t quite put my finger on that took it to another level. The bread was positively soaked in delicious gravy, and it broke off easily, like pieces falling off the bone of slow-cooked meat. The mutton itself was tender and well-cooked, but the star of the show was that powerful gravy, which is so magical, I suspect you could use it as an alternative fuel source for the cars lined up outside waiting to fill up. This bunny is a master-piece.

It came, as is customary, with a small plastic bankie of carrot salad but I felt the salad needed slightly more acid to cut some of the richness of the curry, but that’s just my personal preference. There also were no pickle sides, but fortunately, I had a jar of curried chillies at home, which proved a great accompaniment. The bunny – unusually – comes with the option of being packaged up in a snazzy cardboard box for takeaway. The box costs R3 and is totally unnecessary, but I still bought one, as I thought it would make a nice souvenir – after all, it’s not everyday, you get to eat a bunny as fine as this one. I sincerely compliment the cook.

Since my last time in Durban, chicken tikka places have appeared everywhere. I lost count of how many I spotted while driving around (Bluff Tikkaway must get some props for their name as should Kwikka Tikka in Silverglen). It seriously put me in the mood for some tikka, and I eventually settled on a relatively new takeaway located, funnily enough, in a service station court, this time the Caltex Garage on Road 701 in Montford. Al Malika Chicken Tikka is a bare-bones operation with only a small counter and a plastic table in the front of house. I ordered a 2 piece chicken (1 leg + breast) which came with 2 rotis, a large portion of chips, salad and chilli sauce (R49.99), 2 butter naans (R7 each) and 2 aloo & cheese parathas (R25 each). I enjoyed the meal quite a lot and the prices were more than reasonable. It’s interesting how many service station courts have “proper food” on offer these days, as opposed to the limp pie or burger and chips that was the norm back in the day. A tour of Durban’s service station food will be in order next time I am in town.

I only got the chance to visit Pub 501 in the Croftdene Shopping Centre (Unit 5) twice during my stay, which is a true shame, because it’s by far my favourite bar in Durban, with a cool atmosphere and staff – not to mention the owner, Clive, who always makes you feel at home. If you’re in the neighbourhood, pop in for a cold quart of beer, a game of pool and some ultra-spicy fishcakes.

One of the best food experiences of my holiday was eating boiled fresh peanuts, prepared at my mother’s home. We bought the nuts off a street hawker, remnants of the soil they grew in still clinging to them. It was vastly simpler than most of what what I ate but no less satisfying. There is also little that can beat sitting outside on a balmy summer evening in Durban, peeling and eating boiled nuts, a huge pile of empty shells on an old Daily News next to you, while drinking a cup of scorching hot tea.