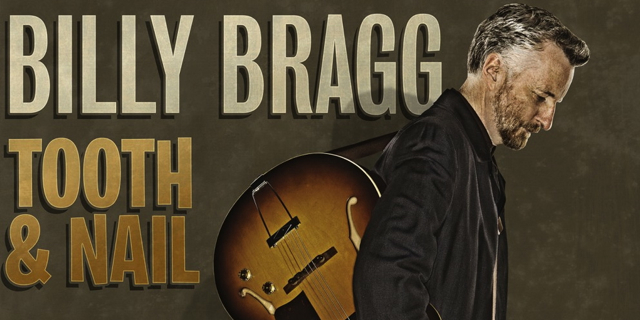 Back after a five-year absence, Billy Bragg vents about love and politics with an American twang

Billy Bragg is a lover and a fighter. His songs are equal parts politics and love, the mostly unrequited – though less so of late. As the lyrics from January Song, the opening number of Bragg’s brand new album, Tooth & Nail suggest, he remains politicised in a time when politics can be mistaken for pretension and dilettante affectation: “Politicians selling freedom / Bumper stickers 50 cents / Ask him what he wants to be free from / Answer don’t make any sense”..Bragg by now has a reputation for taking a punk rock attitude to protest folk music, so this is hardly news. However January Song is one of very few overtly political songs on the album. Tooth & Nail is a more personal-political album, with Bragg working through songs about failing relationships, morality, greed, selfishness, failed dreams, admitting when you are wrong and acknowledging true love.

Tooth & Nail is Bragg’s first album in five years and his fifteenth studio album in thirty-years. Not bad going for a fifty-five year old. Recorded in a five-day blitz with producer Joe Henry in Pasadena, the album sees Bragg adopting a mid-Atlantic accent, which suits the Americana feel of the album. Handyman Blues sees Bragg wounded and baring himself to his partner: “I’m no good at pottery / So let’s loose a ‘t’ and just shift back the ‘e’ / And I’ll find a way to make my poetry / Build a roof over our heads” he sings. On Swallow My Pride, he is more repentant, “But my dreams will not come true / Till I swallow my pride and get back home to you.” On the musically rapturous Your Name on my Tongue, Bragg lays out his stall for his ex-lover: “Grief was my companion / It pushed me like a sea / The compass blade at my throat, pointing up to the sun / But fear begs a strange courage / It’s a holy conspiracy / That trips me down the path, your name on my tongue” 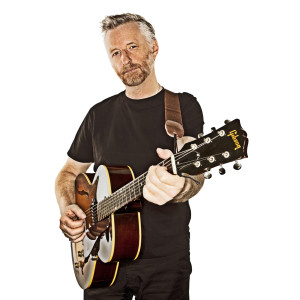 The disenchantment comes to a head with a sterling rendition of Woodie Guthrie’s I Ain’t Got No Home, a song that evokes the spirit of the Mermaid Avenue Sessions , Bragg’s collaboration with Wilco. Bragg and Wilco wrote music for lyrics penned, but never recorded, by Guthrie. The results were a true gem, and Tooth & Nail feels like it has that project’s handprint on it. The other album it shares similarities with is Bob Dylan’s 2001 offering Love & Theft. Both albums draw heavily on the cannon of American folk, bluegrass, blues and country and both appear to come from the perspective of a man at the end of his life. Wandering through life seeing the mad circus for what it is and accepting his own mortality and failings in the same breath.

Billy Bragg’s Tooth & Nail is out now on Cooking Vinyl

Do Unto Others sees Bragg reclaiming the Christian manifesto, “Do unto others as you would have them do to you” for his sectarian plea for what we in South Africa would call Ubuntu. It’s a cry that rings true many times on Tooth & Nail, which says a lot, by saying very little. “Now the way the world is run / Too many people looking after number one / Don’t seem to notice the damage that they do / Though it’s not widely understood / There is a greater good,” sings Bragg in a message that many corporate and political leaders should take to heart. They should probably take heed of the anthem There Will Be A Reckoning, the song that has stadium crowd-pleaser written all over it. “There will be a reckoning for the peddlers of hate / Who spread their poison all across his estate / And a reckoning too for the politicians who / Left us to this fate – there will be a reckoning.” It’s classic Bragg, pertinent yet punch-drunk. Home spun truths from one of Britain’s finest living songwriters.

Besides all the public anger at the state of the world and crumbling relationships, there are flashes of lighter moments. The charming Chasing Rainbows is a country gem, this album’s bar room bawler, with Bragg crooning, “If you go chasing rainbows, then you are bound to end up getting wet”. While Bragg brings the whole album to a close with his cynic-bashing Tomorrow’s Going To Be A Better Day. He takes it to the “pessimistic populists” and the “misanthropic, misbegotten merchants of gloom” with an almost Sitting on the Dock of the Bay-style ditty. Bragg may be a Brit, singing in an American accent, with an American band and producer, but these songs contain universal truths we all can relate to, regardless of race, colour or creed. It’s good to have the people’s poet back.