Nthikeng Mohlele has been working on his second novel for the last couple of years. After a series of misfortunes, including electronically losing most of the manuscript, he has a second offering, Small Things (UKZN Press). In this extract that shows Mohlele’s clipped, controlled style that he deployed in his first novel The Scent of Bliss, the narrator reminisces about his love for Desiree, a postman’s daughter. In the far distance, the spectre of the demolition of the fabled Sophiatown township stands… 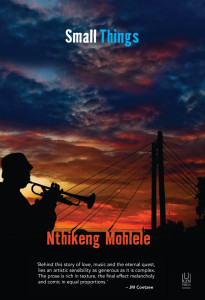 I, TO THIS DAY, fall hopelessly in love whenever I see postmen carrying mailbags. My heart leaps at bright-red postboxes in pictures. They remind me of Desiree – the postmaster’s daughter. We never exchanged much, Desiree and I. I caught her roving eye on me one morning during Mass. Hearing nothing of the sermon, I saw only this eye, a beaming light bulb that warmed me from the third row, a good twenty metres from where I knelt praying, my knees molten with love.

Seeing her absent-minded, in the company of tedious friends, aroused suspicions that I was in her thoughts. End of term, after the mid-year exams, was marked by forced labour. We cleaned the school grounds and windows in preparation for a new school term. I never joined the gardening or chalkboard-cleaning crews, but always chose to be on the window-cleaning teams, where I could, with good perspective from standing on upside-down dustbins, admire my Desiree shining classroom floors. I got generous compliments from inspecting teachers (windows shone like mirrors against the sun) – who little knew that such workmanship was done in a trance. I was like a spider on a damaged web, doing my utmost to contain my blossoming heart.

It never made sense to me why we had to endure two weeks’ break between school terms – during which I almost turned red with longing. My Desiree would, when my hopes were at their highest, at the fast-advancing first day of the new term, come down with swollen tonsils. This I learnt through considered and disciplined interviews with her friends – slippery and non-committal, like goldfish dodging intruding human hands in ponds. Desiree came back to school (a week of absence!) following the tonsils assault, offered me an orange during lunch. She then woke up brave one morning, handed me a sky-blue homemade card that at first appeared blank. But as I opened it, with the care demanded by heart transplants, I learnt she had drawn a small heart at the centre. Complete with a faint fingerprint and candle wax (a confirmation of feelings known and treasured). Executed in candlelight. This awoke the poet in me. I, the same evening, penned a love note whose fire assailed the heart. I wrote: ‘My love is deeper than one million seas, brighter than a billion suns, bathed in milk, fanned with tulip bunches. Shared in moderation, for fear of total combustion. Desiree. Desiree. Desiree. Come to my heart. A universe of joy. Lit by a trillion moons.’ I never got a response. She would be moody and aloof.

She then promised me eternal love – ‘When the time is right’. There were times when I was angry and rebellious; yet helpless. I wrote, in yet another carefully worded love letter, that it was unjust that I had to endure such blissful suffering. I never got a response. Desiree was again down with tonsils, away from school for two weeks, which seemed like eight millennia. She never encouraged my pursuit of her, nor did she discourage it. She seemed undecided, bordering on confused. Not all was covered in soot, though. There were moments when Desiree ignited hushed conversations, only too brief to allow me a glimpse of her torturous charms. It is peculiar, I know, but even now, I associate tonsils with love. In hindsight, my love for Desiree is as it always was: maddening. I visited Desiree at the post office, licked hundreds of stamps on letters to imaginary people. I mopped supermarket floors on weekends, ran errands, to earn money to give impetus to my suit. I bought small things; with big intentions. Wrist watches. Earrings. Tonsil prescriptions.

She appreciated the efforts, yet dismissed them as heart-warming but unnecessary. It took me time to learn her emotional compass – which often spun out of control. I hung on, learnt and unlearnt bizarre discoveries, reassuring compromises, brutal rebukes. I could recognise Desiree’s singing or laughter in a hall full of people; even if there was a thunderstorm. She knew this, and I suspect it meant a lot to her. That was why I once inquired if she ever thought of me, to which she, with fire in her eyes, countered: ‘What do I have to do for you to leave me alone?’ I was beyond bliss. The rebuke was a step in the right direction. Preferable to her more direct protests, the famous: ‘Stop staring at me!’

Sophiatown was a myriad heartaches: souls stabbed in dark alleys, covered with newspapers and flies, come morning. Police lining loitering people up against police vans, frisking them, demanding answers to petty things. Pass books. Places of employment. Lodgings. Intended destinations. The Americans and the Spoilers, mob figures, cruised the streets with their maroon and cream Oldsmobiles and picked unwilling beauties up off dance floors. Like one picks cherries off a birthday cake.

Yet you heard staccato and other breeds of laughter. Midnight wails, too. How was it that amid open sewage, such laughter was possible? That self-taught pianists, painters, writers and unassuming philosophers saw and expressed life with such devastating clarity? It was as if skulls were not being cracked with batons, torches not shone on naked lovers during planned and impromptu raids. Happiness, I found, was a strange creature. While the gramophones wailed, while wedding songs filled romantic summer nights, rumours abounded that Sophiatown would be demolished.

Drunks in the streets sang and stumbled down Gold Street (shebeens, brothels, dagga dens), their jollity interspersed by moments of clouded introspection. I endured Father Goebbels’s lemon smiles; till I grew pubic hairs, expressed the most ungodly sentiments I could dream of. I was kicked out of the orphanage, accused of being a demon.

My youth was, upon leaving Benevolence Place, consumed by a single urge: to charm Desiree. My night prowlings were never about blowing air onto feminine navels, but lonely hours spent in the Odin Cinema or Back of the Moon. Like a stray dog. In search of not food, but meaning. I hung out with Bra Todd, a respected newsman, with a taste for American swing. ‘Everyone is a politician,’ he growled, with his infectious laughter. We listened to records, while I polished his shoes, helped with the dishes, and learnt sophisticated ways to woo a lady. I was terrified to let my feelings be known, so although Bra Todd looked out for me, I refrained from burdening him with my Desiree misfortunes. He was her uncle and, as such, had full command of her attention. How I envied him! I, at fifteen, between bouts of pleading with Desiree (silent, helpless despair), spent many late nights with Bra Todd in newsrooms, as a willing apprentice.

I spent most Sundays at the Odin Cinema, enthralled by competing ensembles: dancers, jazz bands and choral music. Desiree sang for the Fleeting Birds, a group that specialised in church tunes. I, like a man possessed, shuffled between bodies in the overcrowded performance hall, for a view of her. Desiree was always the last to walk on stage, and my sanity momentarily escaped me every time she sang the lead in ‘Amazing Grace’. Everyone agreed that the grace was truly amazing – and so was the line of suitors. I made sure I pleased Bra Todd; knew that none of those rascals with pulsating hearts would dare to touch my Desiree. Desiree and I had an understanding, fraught though it was; raging love torrents received with lukewarm courtesy.

Her voice, rising through the performance hall, assured all that God would one day take a stroll through Sophiatown and, as Father Goebbels was fond of saying, ‘set the crooked paths straight’. Bra Todd loved Desiree who, in his estimation, had the subtle charms of a fleeting breeze. He would play Louis Armstrong records, his favourite being ‘Kiss to Build a Dream On’. I embraced my role of accidental houseboy – for its proximity to Desiree. It never mattered what was thrown my way: cleaning muddy boots, scraping burnt casserole dishes, or the occasional debt-collection voyages – complete with Bra Todd’s warnings: ‘Tell Joel I have only anger to express.’ I loved seeing grown men shiver, mumble incoherent explanations. I collected debts as old as three years – where some debtors suffered bloody noses even after paying in full. I was, by comparison, the safest citizen in Sophiatown. Those in the know would simply say: ‘That is Todd’s boy, stay clear of him.’ 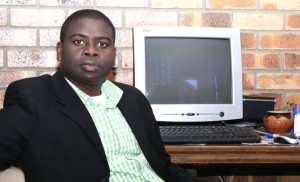