In the marble-walled, air conditioned lobby of the five-star Sonesta Hotel in Luxor, Egypt, glamorous movie stars swan around in sequined dresses, producers take meetings with potential collaborators over laptops and coffee, exhausted-looking youngsters rush around with tripods, making short films (they have only a week to do so) under the stern gaze of Haile Gerima, Ethiopian luminary of independent cinema. At one point, Haile marches up to two young men and shouts, “I need to be fed, now!” It is three o’ clock in the afternoon and he has once more worked through lunch. At a desk sits Samia, the travel agent, who has to make sure that 100 guests from across Africa and the world are in the right place at the right time. She stares into her laptop. I feed her a piece of Toblerone and she smiles wearily. This hotel lobby serves as temporary headquarters of the Luxor African Film Festival. I am here to screen Dear Mandela, a documentary I made with Christopher Nizza and the members of South Africa’s shack dwellers movement, Abahlali baseMjondolo. It is my first time traveling to Egypt. How unbearably exciting to glimpse, after hours flying over peach-coloured clay mountains to see at last, two green stripes hugging a slice of blue: the Nile River, and then to happen upon this cacophonous microcosm of the African film industry.

To create something out of nothing: that is the most audacious thing, the primal creative urge that pulses through us and makes us do impossibly beautiful and daring things. In Luxor, site of the Ancient Egyptian city of Thebes, a crew of dreamers has created a festival borne out of ‘the glow’ of the revolution that began on January 25th, 2011. The festival, which recently wrapped up its second edition, is an ambitious week-long affair with screenings of 100 films from 20 African nations along with workshops and visiting filmmakers ranging from cognoscente like Souleyman Cissé to first-time filmmakers like me. 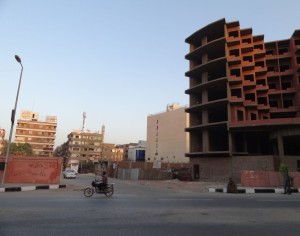 For Egypt, this is a time of liminality, of standing at the threshold of something new. We turn to one side and see Luxor’s desperate poverty – over seventy percent of their economy relies on tourism, and hotels, we are told, are giving away their rooms at ridiculously low rates in an attempt to lure visitors. The festival itself is such an attempt, as the Ministry of Tourism admits. Every local resident I met spoke of their suffering, of the lack of tourists and the struggle to feed their families. There is the specter of torture and the anguish of families of the disappeared, stories of women being raped in Tahrir Square and stories of a revolution hijacked. One of the volunteers, actor and filmmaker Taha Askar, says, “we made one revolution; the Muslim Brotherhood stole it, now we have to make another one.” I want to ask him, in my naiveté, when are they planning to do this? Tomorrow? Next week? I want to bear witness to it while I am here, I want to understand it, and yet, I am afraid. The day I left Egypt, nearly 200 people were injured in Cairo when protesters stormed the headquarters of the Muslim Brotherhood. 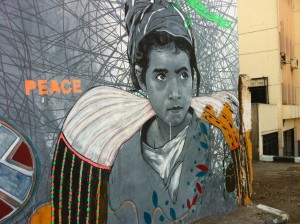 Flaubert traveled to Egypt when he was twenty-seven. He wrote that it “is a place of contrast. Splendid things gleam in the dust.” Everywhere I looked in Luxor, construction projects were half-finished and abandoned. Beyond the delicately manicured gardens of the Winter Palace, where Agatha Christie is said to have wrote Murder on the Nile, where Princess Diana sunned herself while on honeymoon, beyond the strip of British restaurants catering only to tourists, lies a land that has been repeatedly looted, robbed from under its residents’ feet.

The ancient treasures of Luxor feel improperly cared for. The sumptuously decorated tombs in the Valley of the Kings are carelessly guarded – one insouciant guard smokes cigarettes outside the entrance to tombs, and we are able to roam about alone, unwatched. We could have defaced them if we had wanted to. The Avenue of the Sphinxes, built by the 30th Dynasty king Nectanebo I (380-362 B.C.), passes, in some sections, through what appears to be a rubbish dump. Although currently slated for restoration, the Sphinxes look like sand castles – ready to be kicked over at any moment.

If we turn to the other side, there is a sense of inevitable victory, of fortune favouring not only the bold but also those who choose to be on the right side of history. Before our screening, a festival volunteer shared a tiny cup of strong Egyptian coffee with me. I asked him about life in Cairo. He tells me that so many people are now being killed that he thinks they will have to abandon protests and instead seek change through elections. He believes that the Egyptian people will vote the Muslim Brotherhood out, if given the chance.

Egypt’s Minister of Tourism writes that the Luxor African Film Festival aims to enhance “cultural connections between Egypt and the African participating countries.” It is clear that the organizers intend to use the festival to make a statement: Egypt is ready to repair its relationship with its African neighbors.

One afternoon, I left a film criticism workshop early and walked around alone searching for food. All the stores were closed, iron gates shut, and the streets empty except for a group of young girls and women clad in black jilbābs, who giggled when I greeted them. On the way to the Palace of Culture, I happened upon a large mural of what seemed like a fitting symbol for the festival: televisions adorned with wings, painted in the style of hieroglyphics, taking flight amidst lofty words like: tolerance, truth, love, beauty, respect, and phrases painted on feathers: we need new knowledge, together we can create. For a moment, I contemplated this mural happily. It was pleasing to the eye; it slotted in to my optimistic vision of progress, unity of African nations, the popular notion that culture, that great translator, that great equalizer, will save us all from war and poverty. And a moment later, I realized that all the words on the mural were in English, and that Arabic-speaking residents, many of whom spoke only a smattering of English, could not understand it. Thirty percent of Egypt is illiterate. It was a failure to translate.

A failure to translate seemed to haunt the festival, though I imagine that these are the kinds of kinks that could be ironed out as the festival matures. Films in English could not be understood by the locals. Some films had been subtitled in Arabic but the English subtitles were blacked out so that festival guests who didn’t speak English could not understand. It was an odd experience, trying to watch Alrick Brown’s Kinyarwanda, a film I’d been longing to see, and trying to divine meaning from facial expressions, tone and music. Midway through one screening, dozens of young children suddenly entered the theatre, chattering, laughing and playing hide-and-seek amongst the chairs. One little girl sat in front of me and stared back at me. The children were shushed. For some audience members, I imagine that the spell of their cinematic experience was broken. For others, the inevitable intrusion of life outside only served to remind us to translate, to insist on opening our doors wider, to be more inclusive, in short, to keep it real. 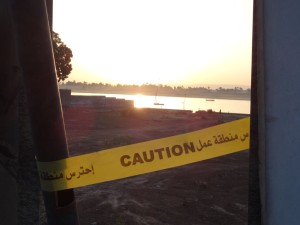 Luxor residents were conspicuously absent from screenings I attended. One volunteer organizer told me that the locals aren’t interested in African cinema. They only want Egyptian movie stars, or Hollywood movies. Azza Elhosseiny, the festival’s Executive Director, says this is one of the reasons for starting the festival – to get Egyptians interested in African films and to remind Egyptians that they are Africans, too. Which brings to mind a question posed at the Isital Forum, where programmers and producers met each day to sketch out plans for a co-production fund and market to launch at next year’s festival: we can make these African films, but who will watch them? How do we develop the taste for African cinema?

The arresting film Nairobi Half Life, which was awarded the festival’s Special Jury Prize, asks the question: do we look (at injustice, poverty, the truth), or do we look away? Mwas, an aspiring young actor, travels from his humble rural home to the big city. As he is drawn into a life of crime in order to survive, he is also accepted into a family of actors and given a role in a play – his dream come true. He is constantly torn between two worlds, hence, ‘half life’. He must choose between a life of money, excitement and sense of belonging (albeit to a gang) and the more authentic life that he left home to seek – the life of an actor whose work speaks to social realities.

Nairobi Half Life has a Kenyan director, cinematographer and screenwriter. It has garnered international awards, but it is also a hit in Kenya. The star of the film, the soft-spoken 28-year-old Joseph Wairimu, says that he tried to get a ticket to see the film in a Nairobi cinema three times, and each time, the screening was sold out. This is good news for Kenyan cinema, and good news for African cinema. He said, “It’s wonderful the kind of power that film possesses. We are the custodians of history; we practice our activism through film. [With] films like Dear Mandela and Nairobi Half Life, you can be amazed at the lengths they go to, to make people think about their lives and the way forward.”

Running a festival is often a political as much as a cultural project. Minutes after landing in Luxor, I struck up a conversation with a man who turned out to be Libyan filmmaker and dissident Mohamed Makhlouf, director of the Arab Screen Independent Film Festival Benghazi. He tells me about returning to Libya after 36 years spent living in exile in London. He made a pact with the Benghazi authorities: no films dealing with sex or religion in exchange for zero censorship when it came to politics. He is affable and, though in his fifties, speaks with youthful brimming energy. He described the magical scene – watching films in a public square, films that challenged the dictatorship. “Can you imagine?” he asks me.

I can. I imagine the possibilities for Luxor, for the festival, for young filmmakers across Africa, as we leave Egypt and return to our humble lives of making art, of maxed out credit cards and hustling to survive and thrive, and I think of the lotus flower, which adorns the walls of the tombs of the kings and queens. It is a symbol of creation: it closes at night and sinks underwater. In the morning it re-emerges and blooms again.

Dara Kell is an award-winning South African filmmaker. Her feature documentary Dear Mandela follows three young members of South Africa's shack dwellers movement as they resist mass eviction from their homes. The film has screened in 35 countries and has been translated into 8 languages. As a documentary editor, her work includes Academy Award-nominated Jesus Camp and films about blues music, mental illness, domestic violence and international human rights. Dara lives in New York and is currently at work on a collection of short stories. View all posts by Dara Kell →