Has Vilane Mkhwanazi consigned the vuvuzela to the dustbin of South African football culture?

Unfortunately not. Last Saturday in Durban, during a game between Kaizer Chiefs and Golden Arrows, the militant young Amakhosi fan attempted to repurpose the world-renowned instrument of aural terror as a blunt instrument of corporal punishment. His intended victim was referee Lwandile Mfiki, who had just dismissed Reneilwe Letsholonyane for what was, at worst, a bookable tackle.

Mkhwanazi’s over-vuvuzealous intervention should (theoretically) have forced the PSL to summarily outlaw the object as a security hazard, just as the Nations Cup Local Organising Committee (LOC) banned the umbrella. But don’t hold your breath; the vuvuzela sustains a minor industry, and is widely deemed an old and inseparable feature of diski culture, despite the fact that its tone-deaf bleat first began to echo around our stadiums a mere fifteen years ago.

We’ve seen sporadic bouts of loutish vuvu abuse in PSL stands over the years. On occasion the cacophonous plastic trumpets have been hurled onto the pitch by irate fans, and the odd dronkgat fan has bopped a fellow dronkgat on the cranium. But this was the first time the vuvu has been wielded against a match official.

It went viral across the planet within hours. That the agile Mfiki managed to duck under the blow was a small mercy. 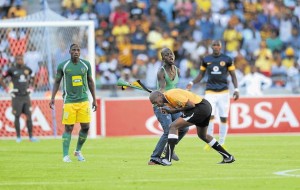 In most European and South American leagues, fans’ aggression is so virulent that match-day security is comparably aggressive. Every bag and body is searched, and the only serviceable weapons at hooligans’ disposal are small unbannable objects like coins and cigarette lighters. Pitch invaders are usually captured before they cross the touchline into televised antiheroism.

By contrast, the PSL has been lulled into complacency by the relatively benign spirit of South African football. On Soweto derby day, the stands are an intricate tapestry of black and gold – a very different sight to the brutally tribalised blocks of colour at an equivalent derby day in Manchester or Rio.

But Mkhwanazi reminded us that even the mutant calm of the PSL can’t kill off the gene of discord that lurks in the DNA of association football. After all, this is a game born from violence and anarchy – first as a holy-day village riot in pre-industrial England, which happened to involve an inflated pigskin of little importance, and then as a cunning opiate devised by the Victorian establishment to regulate the ungovernable passions of the newly urbanised northern underclass.

For better or for worse, football remains a revolution substitute for the hopeless and downtrodden.

Pitch invaders like Mkhwanazi, as criminal as they are, do us a small service by briefly puncturing the wanky, glitzy, sanitised vision of football that the game’s tycoons and sponsors attempt to sell us.

We’re often told that renegades like Mkhwanazi are not “true fans”. Nor are the banana-throwers of Spain or the coin-hurlers of the Premiership, the argument goes. Well, that’s bollocks. The truest fans are the hooligans, the madmen and the bigots. The rest of us are just dilettantes.

Carlos Amato is a football writer and illustrator. Born in Cape Town, he later resurfaced in Johannesburg View all posts by Carlos Amato →