Eighteen years ago to the day, on April 21, 1995, the Icelandic singer Bjork released a single by the name of Army of Me. It’s thumping industrial beat, Michel Gondry directed sci-fi video, featuring Bjork with metal teeth and its chorus of “If you complain, once more / You meet an army of me” made it a surprising choice for Bjork’s first single from her sophomore album Post. Sophmore that is if you don’t count her self-titled 1977 debut recorded when Bjork was just eleven. 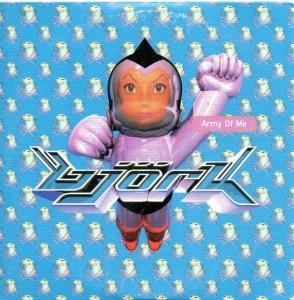 Bjork’s album Post, followed two years after her successful 1993 album Debut, with many of the songs dealing with her move to London to record the earlier album. It has been reported that most of the songs from Debut were written before Bjork arrived in London and the songs for Post were written in London, documenting this transition period. However Army of Me is an exception, it was written by Bjork and Graham Massey before Debut was even recorded.

The song entered the UK singles charts in position no 10 and stayed in the top 75 for five weeks, Bjork’s most successful single at the time. It also reached the no 21 position in the US Billboard’s Hot Modern Rock Tracks chart. The song would go on to chart in Sweden, Belgium, Norway, France, Switzerland, Austria, New Zealand and The Netherlands.

“It’s actually written to a relative of mine who had been a bit out of order for a while,” Bjork is reported to have explained. “I’m not sure why I wrote it.” “Maybe I felt that Debut had been such a polite, shy album – there was a side of me that was so shy and such a beginner, I was very flattered when everyone loved Debut but also a bit confused because it wasn’t really me,” said Bjork. “Maybe Army Of Me was an attempt to balance it out.” 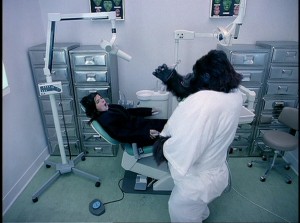 A screen shot from the Army Of Me, Michel Gondry video

To this writer, who was seventeen at the time Army of Me hit radio and television in South Africa, it seemed lie a most revolutionary of pop songs. It was dark and menacing with clanging industrial tones, an aggressive chorus and a quirky strange video, it opened up my eyes to the potential of pop music and set me on a journey that has still not ended. And all this time, eighteen years later Army Of Me still remains a magnificent moment in pop history and Bjork, one of the finest musicians and artists of the last twenty years.

To see the Michel Gondry video for Army Of Me, click here