Most people in the world know the Miranda rights. The pervasiveness of American films and television series means that at some point during an episode of Law & Order or a Hollywood action-blockbuster, audiences have heard words to this effect: “You have the right to remain silent. Anything you say can and will be used against you in a court of law. You have the right to consult an attorney before speaking to the police, if you cannot afford one, one will be appointed for you. If you decide to answer any questions without an attorney present you can decide to stop answering at any time until you have spoken to an attorney. Knowing and understanding these rights as they have been presented to you, are you willing to answer any questions without an attorney present” 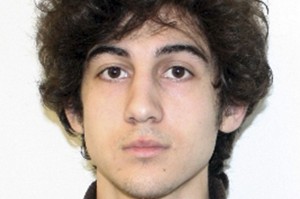 These ensure police, prosecuting authorities and the United States government, maintains the basic rights of those arrested in the country: to have legal representation, to guard the arrested person’s Fifth Amendment right against forced self-incrimination, to be presumed innocent until proven guilty, to ensure that no nefarious interrogation or torture even, takes place. But, Dzhokhar Tsarnaev, 19, only heard these words on Monday when he was charged with using a weapon of mass destruction and malicious destruction of property resulting in death by a federal magistrate who appeared at his bedside at Beth Israel Deaconess Medcal Centre in Boston. He had already been interrogated by police without having these rights available to him. Tsarnev appears the lone surviving suspect behind the bombings that killed three people and injured several others during the Boston Marathon last week. He was found injured and bloody hiding out in an unused boat in Watertown, Boston. Dzhokhar’s brother Tamerlan, 26, was killed during a police shoot-out on the streets of Boston last Friday.

The motive behind the bombings remain unclear. There is, as yet, no information as to whether the act was a political one fed by radicalisation around the separatist claims of Chechnya (to which the brothers have a familial link, but where neither have ever lived), an act of social anger, a politico-religious motive constructed around Islamic anti-Americanism, a criminal act or an amalgamation of more than one of these factors. But Dzhokhar Tsarnaev, nevertheless, not have his Miranda rights read to him. This is reflective of a worrying trend – especially under the Barrack Obama administration –  to curtail civil liberties in what is often described as an unprecedented and exceptional war against terror. Where there are very few rules and the “terrorist” protagonists have little respect for the prescripts of the Geneva Convention, it is often said, by governments.

This is why, pointed out Jaime Williamson, the legal advisor to the International Red Cross, governments are scaling back on the human and civil rights afforded “terror suspects”. Williamson, who was speaking at a discussion on Terrorism and Civil Liberties: An Impossible Balance? at the Commonwealth Law Conference in Cape Town last week, suggested that this has led to “lacunas” in both domestic and international arrest, interrogation and prosecution procedures of terror suspects and a reversal of minimum standards of rights – like that to be presumed innocent until proven guilty. Or not to be tortured.

The Miranda rights of anyone arrested in the United States does have an exception clause, detailed following the 1984 Supreme Court case of State of New York v Quarles – a “public safety exception”. In that case, an alleged rapist was wearing an empty gun holster and the rape survivor had told police that he was in possession of a gun. The court allowed for police’s questioning the alleged rapist about the whereabouts of the gun before reading him his Miranda rights to stand, as its location posed an immediate threat to public safety. This ruling suggests that police and federal officers in Boston would be allowed to ask Dzhokhar Tsarnaev if there are any other bombs planted in Boston or anywhere else as these would prove an immediate threat to public safety – but not much else.

But, the Obama administration has a taken a much broader approach to the public safety exception of the Miranda rights. In a 2010 memo to the Federal Bureau of Investigation the US justice department, clarifying the waiving of the Miranda rights, noted that “there may be exceptional cases in which, although all relevant public safety questions have been asked, agents nonetheless conclude that continued unwarned interrogation is necessary to collect valuable and timely intelligence not related to any immediate threat, and that the government’s interest in obtaining this intelligence outweighs the disadvantages of proceeding with unwarned interrogation.” This broad approach was previously used when the Federal Bureau of Investigation interrogated Umar Farouk Abdulmutallab, who was accused of attempting to blow up a Detroit-bound plane in 2009. Again in 2010 following an attempting bombing of Times Square by Faisal Shahzad.

The retraction of civil liberties and basic human rights in places like the United States should concern everyone. These precedents can be easily manipulated as “best practice” models on citizens of other countries. This includes South Africa where, for various reasons including a historically repressive state security apparatus DNA and contemporary militarization of the police, civil liberties are sometimes of scant concern to arresting police officers. Or where activists and protestors are often called “criminals” participating in “criminal activity” by the government. 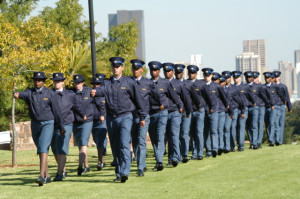 Section 35 of the Constitution is clear about what happens when someone is arrested:

1.    Everyone who is arrested for allegedly committing an offence has the right ­

c.    not to be compelled to make any confession or admission that could be used in evidence against that person;

d.    to be brought before a court as soon as reasonably possible, but not later than

e.    at the first court appearance after being arrested, to be charged or to be informed of the reason for the detention to continue, or to be released; and

f.      to be released from detention if the interests of justice permit, subject to reasonable conditions. 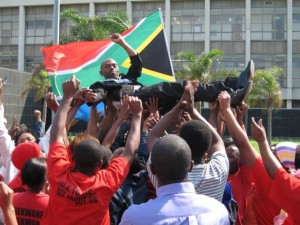 Yet there is a fracture between these rights and the everyday working of the police – that could well be exacerbated by international cases like that of Tsarnev’s in the United States. On Monday the case brought by members of the shack-dweller rights movement Abahlali baseMjondolo against the minister of police returned to the Durban High Court. The matter went back to September 2006 when S’bu Zikode and Philani Zungu, then, respectively, the chairperson and deputy chairperson of Abahlali, were arrested on their way to a radio interview and subjected to assault in the Sydenham Police Station. The Kennedy Road shack settlement in which Zikode and Zungu lived at the time mobilized to protest the arrests and was closed off, locked down and fired upon by police – one person, Nondumiso Mke, was shot and wounded in the leg. This followed a request by the provincial KwaZulu-Natal government that Abahlali desist from communicating with the media – a constitutionally problematic request, to put it mildly. Mke, together with Zikode and Zungu were awarded damages of R165 000 for the alleged assaults – which appears brutal.

Following his 2006 court appearance, Zungu told me during an interview that Sydenham Police Station superintendent, Glen Nayager had assaulted him after his arrest. “I was punched and had my head beaten against the wall by Nayager until I fainted,” he said. “He kicked me in the private parts and when I asked him why, he said, ‘Because you are a ball.’” At the time, Nayager, who has since died, told me: “I had nothing to do with their arrest. I can’t comment on the allegations against me.” At Sydenham police station on the night of the arrest, a shirtless Mnikelo Ndabankula then the Abahlali spokesperson, told me: “When they arrested Zikode and Philani they ripped the shirt off me and said, ‘These red shirts [worn by Abahlali members], we will use them to mop the floor.’ Then they threw it on the ground and stamped on it. “The police in Sydenham can’t stand us because we know our rights and are fighting for them.” According to Nayagar, two of his members had approached the car in which Zikode and Zungu were seated prior to their radio interview because a similar vehicle had been used in a robbery. Zikode, a former Sydenham police station reservist, and Zungu were arrested after allegedly becoming abusive. They eventually appeared in the Durban High Court on charges of assaulting a policeman and resisting arrest, and were released on bail. The charges were later dropped.

The reasons for their initial arrest now appears inconsequential at best, at worst, an attempt by the police to violently intimidate grassroots activists fighting for their rights. Very little regard was given to the Constitutional provisions ensuring their rights. Incidents like these reflect the fragile space in which South Africans – especially those who are standing up for their rights – can be allegedly abused, tortured and criminalized. South Africa’s security apparatus often acts with impunity and a seeming disregard for the rights – and the humanity – of the citizens it is supposed to protect. The Marikana massacre, the case of Mido Macia who was dragged to his death after being tied to the back of a police van and the Cato Manor hit-squad reports are merely three examples of this disregard. Anyone concerned about these rights, should be concerned about the regressive and repressive approach that the US government has taken to Tsarnev.

For a full transcript of Tsarnev’s hearing go here