The New Black Panther Party was in South Africa recently. Kwanele Sosibo is still trying to figure out whether the movement can be anything more than divisive.

The press release was unfortunate in its selection of quotes. It announced the New Black Panther Party’s tour of Soweto on the morning of March 22 – a day after Sharpeville Day – with unsophisticated plainness: “At 1pm, they shall be visiting the home of the late Pan Africanist Congress (PAC) of Azania president Zephaniah Mothopeng at Orlando West,” said the email, forwarded to me by a colleague.

Then came the quote, attributed to chairman Malik Zulu Shabazz: “All on my mind is being in Africa. Everyday I vision myself on the ground in the motherland with my long lost African brothers and sisters. I can see the sun shining on my head and rolling with my delegation and rolling with the PAC…”

Who is the New Black Panther Party (NBPP)? What connection could it possibly have to the original Black Panthers? And with that dated rhetoric, what is its connection to the PAC, and how much is that reflection of where the PAC is? 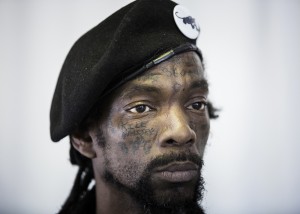 The NBPP has staged numerous confrontational street protests under the leadership of Zulu Shabazz, including a 1998 protest in Jasper in which members confronted the Ku Klux Klan over the truck-dragging of James Byrd by racist whites who had attached him to the back of a pick-up truck and dragged him to his death. The group also protested at the exectution of Gary Graham (who changed his name to Shaka Sankofa in prison), a man who was controversially sentenced to death in 2000 for armed robberies, assaults, attempted murders, a rape and a disputed murder.

An article published in the Austin Chronicle in 2001, cites the group handing out turkeys and food baskets on Thanksgiving and tackling “institutionalised problems such as housing, the death penalty and racial profiling.

As a member of the Black Lawyers for Justice, Zulu Shabazz, for a time, represented Megan Williams, a black woman allegedly tortured and raped by seven whites in 2007. Shabazz wanted the case declared a hate crime, but as Williams was in a relationship with one of the perpetrators, only one was charged with a hate crime. Williams would later retract the charges but the perpetrators had already pleaded guilty.

Generally, the white-owned American media portrays the NBPP as a bunch of irrational black militants itching for a fight. The group does a good job of living up to that. King Samir Shabazz, a high-ranking official of the Philadelphia chapter of the group and right-hand man to Zulu Shabazz, has been known for advocating the slaying of ‘crackers and their babies’ as a route to black liberation, over a loud hailer, in public.

Samir’s outbursts are problematic in so far as they offer no innovative discourse to the struggle of the universal black community. In fact, his outbursts are uttered so frequently that they seem to be a strategy to get in the news rather than purely unsophisticated talk. 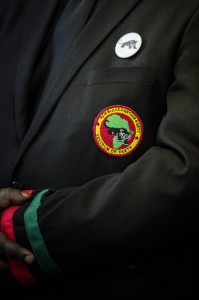 Dressed up and nowhere to go: by Felix Karlsson

In the past Zulu Shabazz, a protégé of Khalid Muhammad (a former lieutenant to Louis Farrakhan who was silenced in the Nation of Islam for making inflammatory statements against homosexuals and Jews, joining the NBPP in early Nineties), has done little to distance himself from such talk, even as he works as a human rights lawyer. Zulu Shabazz, who has been chairman of the NBPP since his mentor’s death in 2001, chalks up the group’s tainted image to the usual media lynchings liberation movements suffer. “The Nation of Islam, Marcus Garvey, Malcolm X… We don’t get fair treatment, we’re always met with a lot of hollering and screaming. My job, first, is to organise people that can articulate and represent our aims and goals objectively, in a way that no one can distort. The challenge I have is to communicate, I have to get this through to my organisation that what we say matters and what we are quoted as saying matters. It must be taken seriously so that we can negate any false caricature. There have been some errors made. But any liberation movement will not be warmly received by America and the membership under my leadership understands that.”

That Zulu Shabazz keeps the facially tattooed Amir Shabazz in the ranks, and he himself has made similar statements in the past means he has no problems remaining in the fringes of mainstream politics, sidelined by those whose lineage he claims.

In an undated CNN Newsroom clip, produced some time during US president Barack Obama’s first term of office, Bobby Seale, founding chairman of the original Black Panther Party delineates on the differences between his organisation and the NBPP. The Black Panther Party was founded in the mid Sixties and was virtually extinguished by the FBI’s thorough counter intelligence programme. The newer group that recently “toured” South Africa emerged out of Dallas, Texas in 1989.

In the clip, Seale speaks in an almost exasperated California drawl, swallowing his syllables whole as he differentiates between what he calls that “old… racist rhetoric” and the people’s revolutionary culture – “the only culture worth holding on to”, according to the Panthers of yore.

All seems above board except the show’s white blonde host seems to be enjoying the exercise a tad too much, even telling Seale that “that’s the exact point I wanted you to make” when he calls running for office an avenue for eliminating institutionalised racism, and Barack Obama a manifestation of that avenue. The NBPP has come to hold the opposite view.

In 2008, the NBPP appeared to “defend” black people voting for Obama. Members of the organisation, particularly Samir Shabazz (who sports facial tattoos that act as a genealogical guide to the group’s philosophies), made national headlines for standing guard at a Philadephia polling station with a police-style baton as voters trickled in. The group’s “intelligence” had apparently revealed that white racists might disrupt the voting process. During the Nato-assisited overthrow of Muammar Gadhafi, however, Zulu Shabazz publicly called Obama a “bamboozling, buck-dancing Tom” and a “white man’s nigger”. 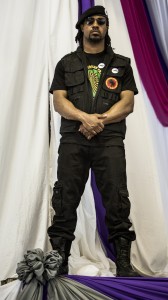 In less than four years, Shabazz and his team had made an about turn, joining the ranks of Obama’s increasing detractors.

Speaking to The Con, Zulu Shabazz stood his ground on the Panther situation. “Few people involved with the Black Panther party disagree with us, many in fact agree with us,” he said. “In fact Bobby Seale and I have had many long talks, however he has a soft spot for white people, he is trying to make money. He should be honoured that I picked up this blood-stained banner despite all the negativity associated with it in the past.”

For the PAC, the organisation’s presence in the country seemed to exacerbate already existing factionalism, with president Letlapa Mphahlele conspicuous by his absence as the group made its rounds in Gauteng. PAC organiser Wandi Montjane said the PAC president was not ideologically opposed to what the NBPP stands for but was listening to the bad advice of people close to him. “The NBPP represents the poorest and most marginalised communities in the States and just like the PAC, the media doesn’t give us coverage,” he said.  “They focus on negativity, it doesn’t make the news or if it does, it’s in the middle pages where it is hidden. As the marginalised and vilified we have the same experience, but we won’t allow the media or anyone to choose our friends, we will choose them based on ideology and a comradeship shaped by principles.”

Examining the PAC through the prism of the NBPP, there are suggestions that, as they recede, peripheral groups find each other, forging friendships of convenience. Besides giving the PAC a pep talk about being more active in the community, Zulu Shabazz’s clearest aim was to set up a legal practice in South Africa. At the Pimville Library in March, in front of about 50 people, Lehlohonolo Shale, the PAC’s Pimville branch chairman, was still celebrating the “front page” of The Star (March 22), where members of both parties were photographed together. Shale said the NBPP had to cross the Atlantic for the media to notice the PAC. He was right, but it was noticing for the wrong reasons. Was the factionalised PAC splintering even further, with fragments taking counsel from incoherent separatists? Perhaps the press release was fitting after all, the long-lost African brothers and sisters had found each other on the motherland, dressed up with nowhere to go.