“I know I know I know… we’ve been playing a lot. But I’m sure there are still some of you who still got the itch?!? If so pull in to the pad for a free gig!” read the Facebook invite from agit-funk provocateurs, The Brother Moves On. For the last three years or so, this Johannesburg collective have shifted their live shows up a gear, thrilling audiences with a heady blend of experimental African jazz, bone-grinding funk, psychedelic rock, biting political and social commentary and great performance art.

Drawing on the work of artists such as Busi Mhlongo, Philip Tabane, Harari and Stimela as well as the extensive canon of South African jazz, the Brother Moves On have created a sound that is full-on funk machine meets intimate, psychedelic African folk. The thought that, after three years of thrilling live shows and standout recordings (The Golden Wake EP, ETA EP and B-Sides and Rarities collection), their fans would have had enough, was laughable. And as the crowd poured into the house in Melville on the last day of  April, the answer was clear: plenty of Joburgers still have the “itch”. After all, this was a rare opportunity to literally see the band on home turf. The venue was lead singer Siyabonga Mthembu and guitarist Raytheon Moorvan’s lounge. 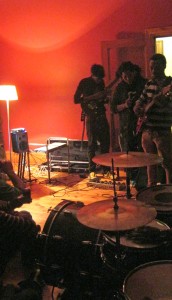 Home Turf: The Brother Moves On play their lounge: By Lloyd Gedye

The band had dubbed the gig as “The Brother Moves On Not-So-Secret-Party” – an obvious reference to the passing of the contested Protection of State Information Bill, which has been labeled the “Secrecy Bill” by South African media and activists. Parliamentarians adopted the Bill on April 25 with 189 votes in favour and 74 against. There was one abstention. It still has to be signed into law by President Jacob Zuma and it looks likely to be heading for a Constitutional Court challenge well before the ink can dry.

But let’s get back to the Brother. As the band began to play, teasing out gentle rhythms, skating at the boundaries of a song, like a kids’ colouring book waiting to be filled with excited hues. Except, there is no staying within the lines tonight…

Mthembu begins to speak. He is talking about the Secrecy Bill and how we as a citizens need to wake up and start paying attention. This is not a middle class whinge – something which has become an all too familiar shadow which emerges when the contentious Bill is discussed. Mthembu’s  words are a pointed reminder that collectively, we all as South Africans have allowed this to happen. Despite the hysterical nature of how the media has covered the Secrecy Bill, it is the working class poor of South African society that stand to lose the most from its promulgation. “We thought about censoring our songs for this gig,” said Mthembu. “But our songs are not political like that.”

Whatever! With The Brother Moves On, you never get a straight song. On Dagiwe Mthembu may sing about getting legless, but he also throws in some social commentary about alcohol being used as a crutch and it’s impact on the break down of the family unit in South Africa. When he sings about a party the band attended in Park Town Mansions, the song is part hedonism 101, part social and class commentary. There is no black and white, with The Brother Moves On – just multiple shades of brown. 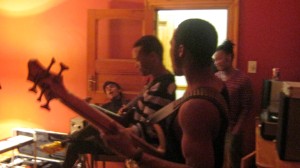 “This song was going to be censored,” Mthembu spat again. “Because it’s against the party and this party is against the Secrecy Bill.”

The band then breaks into a twisted version of Black Diamond Butterfly. This song usually delivered by the collective’s Kyle de Boer, is a dark, throbbing rhythm of a song. Tonight, it’s Mthembu delivering the lyrics and musically the song has taken on a rather gothic feel. Almost as if Bauhaus had not been founded in Northampton in 1978, but Thembisa five years ago. The lyrics about the white worm of history being a cocoon for the black diamond butterfly have left many punters squirming in the past. Not tonight however.

“They are watching us comrades, ” Mthembu intoned a foreboding warning. “They know we are not who we say we are.” The lyrics, speak to the paranoid and vindictive nature that ANC politics has taken on in South Africa in recent years. If it’s not artists and art galleries under attack for expressing their views, no matter how racist and problematic, it’s the media, business leaders and activists who are cast as the enemies of revolution.

If we had a Rand for every time the ANC has had to rally behind Zuma, with the well-worn indignance of “How dare you embarrass our President?”, we would all be rich. The fact of the matter is that our President does a pretty good job of embarrassing himself on a daily basis. As I watch the Brother tearing it up on home turf, my thoughts turn to what’s been termed ‘Guptagate’ in headlines in recent days. The Gupta family, which has ties to Zuma,  flew over 200 guests into the country landing at the Waterkloof  military air base from where South African police escorted them to Sun City for a lavish wedding celebration marred by allegations of racism. 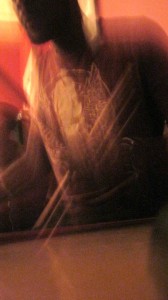 “This country is not a joke,” Mthembu warned with a pause. “That needs to be said again, this country is not a joke. You have to take your responsibilities seriously.” But who was Mthembu talking to? The President, parliamentarians, the ANC or all South Africans? My guess – all of the above. The Brother are just holding up a mirror to us all, airing our dirty laundry in plain view.

Black Diamond Butterfly morphs straight into Good Times – a song about the travails of a miner, who goes to the tavern on pay-day and gets seduced by beautiful women who want free drinks. When the money has run out, he is left all alone and ends up getting robbed on the way home. The song, which was written before, but released shortly after the Marikana massacre last year, is a poignant pop moment etched into the South African musical landscape and has become a fan favourite.

As the crowd sings along and Mthembu gyrates his hips, playing the women dancing for the miner, I am thinking about Cyril Ramaphosa, the former trade unionist turned empowerment business deal giant. The commentary on black wealth and Black Economic Empowerment (BEE) inherent in Black Diamond Butterfly is juxtaposed against the chronicle of migrant labour and exploitation in South Africa’s mining sector inherent in Good Times, and it’s immediately clear why Ramphosa springs to mind.

The new ANC Deputy President is one of South Africa’s wealthiest citizens, with an empire built on the back of BEE and was also a shareholder in Lonmin the company affected by the wildcat strike that would morph into August’s Marikana massacre where police are accused of killing the striking mineworkers in cold blood. Earlier that night I had seen Ramaphosa’s grinning mug, staring out of my TV set as he stood behind a chair holding an ailing Nelson Mandela during a high-level ANC visit to the elder statesman’s home.

The video and photos from the ANC visit prompted an angry backlash on Twitter and Facebook, especially from white South Africans, something that I was locked in conversation about before the Brother’s home turf gig. The fight for Mandela’s legacy appears to be at the heart of the struggle for political power in our country, these days. The ANC want him. The DA want him. It’s quite sad, that we cling to our past in this superficial and noxious way as we try and chart a course for our future.

The band takes a request next, an audience member shouts a demand to hear them play Rainbow Child, an early recording. The song is earnest and sincere, stripped of the cynicism and satire that permeates the band’s more recent material. As the song winds down, Mthembu stopped and told the audience assemble in his lounge: “It’s really hard to sing with this kind of optimism. We used to sing this song back in the day. We thought the problem was just getting a job… lately this song has been replaced by a prayer.”

With that the band break into the next song. I stand with my back against the wall,  soaking it all in. This country of ours may be a confusing place and it may infuriate us all at times – but no one said it was going to be easy. Perhaps. we should start paying more attention to artists like The Brother Moves On and acknowledge the ugly and beautiful features of our adolescent democracy reflected in the mirror they hold up to us. Perhaps, we should stop talking and start listening – only then can we really start to getting somewhere.

All I know for sure, is that on a night like that, on the eve of Workers’ Day, The Brother Moves On made this crazy country we live in, seem more real, more tangible. It may be fucked up, but then it’s all of our responsibilities to get out there and play an active part in fixing it. That’s exactly what artists like The Brother Moves On and publications like The Con are trying to do.