A dispute over prize money led to the last-minute cancellation of the South African national sheep shearing championships. The Con was there to find out what happened.

The stage had been set, the sheep had been transported from their farms and loaded into pens and the crowds had started to gather. But with just hours to go to the start of the South African Sheep Shearing Championships, everything unravelled like a ball of yarn in the paws of a kitten – all because of a dispute over prize money.

On Friday last week, The Con arrived at the Bloemfontein Showgrounds for the championships, which were meant to take place this past weekend (26-27 April) to find that the contest had been called off. A visibly disappointed Izak Klopper, a national trainer for the South African Sheep Shearing Federation, said he had received a call at 07:30 on Friday morning, a mere three-and-a-half hours before the first heats of the competition was meant to begin. The call was from a representative of the 100 plus sheep shearers who were set to take part in the championships. The shearers wanted more prize money. 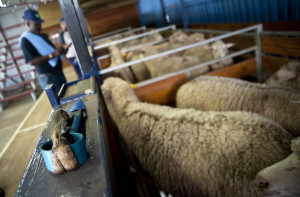 Ready for shearing: The sheep are loaded into pens: By Madelene Cronje

Klopper said the total prize money for the competition was only R20 000 and if the federation had to meet the shearer’s demands, the total pot would have to increase to R557 000 –  a staggering 2785% increase. Klopper informed The Con that the competition had been called off due to the demands. Removing his tie as he spoke, Klopper said: “I have been in this sport for 20 years. Twenty years down the drain.”

Outside the room that hosts the shearing competition, the 100 plus shearers were gathered under a large tree. Attempts to find a shearer who would talk to The Con was pointless.  No one wanted to be singled out as a ringleader, or a spokesman for the group. Inside the shearing competition venue sat  Hendrik Botha, the federation’s President. Botha said that the federation’s total budget was about R300 000 a year, which came in through sponsorship, and with that money it runs four regional competitions, five provincial competitions and the national championships. Hosting the national champs alone cost R150 000, he said, which includes the R20 000 for prize money. The rest was spent on transporting, accommodating  and feeding competitors and judges. “We will be meeting today, to discuss the future of the sport,” said Botha. “We are very disappointed.” 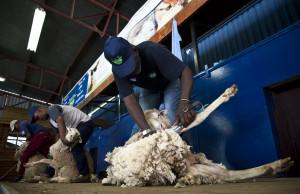 Ready, Steady, Go: Shearers at a training camp in Bloemfontein in 2011: By Madelene Cronje

The South African Sheep Shearing Federation is affiliated to the South African Sports Confederation and Olympic Committee and the Golden Shears World Council.  Last year at the Golden Shears championship, New Zealand rugby legend Sir Brian Lochore called for sheep shearing to be recognised as an Olympic sport.  “I absolutely support that shearing is no longer just a job,” Lochore said at the official Golden Shears dinner. “I do think that one day you will get it in the Olympics.” The sport has such a high profile in that country that Prime Minister John Key attended the tournament last year.

Klopper compares the shearers with endurance athletes – easy to understand when you watch them at their game, which has them standing for hours, backs bent, working a pair of shears in intense concentration while being careful not to slice open their charges and still get the best cut of wool. A study conducted in Australia a few years ago showed that sheep shearers were fitter and got through a greater workload during competition time than the players on the Australian rugby team. “You can’t explain it to somebody who hasn’t watched it,” said Klopper. “I could sit for days and watch these chaps at the skill level they are at.”

Countries that compete in the World Championships include South Africa, New Zealand, Australia, Lesotho, England, Ireland, Northern Ireland, Scotland, Wales, France, Italy, Canada, Spain, Hungary, the Falkland Islands and the Czech Republic.  But the most serious competitors hands-down, come from Southern Africa. South Africa and Lesotho have dominated the world championships since 1996, with no other country getting a look in.

It is not clear what the cancellation of this year’s local championships means for South Africa and Lesotho’s hopes of participation in the 2014 World Championships, as the cancelled competition was meant to  identify the squads to compete next year.

While sheep shearing is a recognised sport in South Africa and around the world, it is worth bearing in mind that it is a profession too. Speaking to stakeholders in the shearing sector, The Con has managed to piece together a picture of how the sector works. It remains unclear if working conditions and rates of pay in their profession played a part in the shearers refusing to participate in the local championships. However, with a profession that was built on the back of Apartheid slave labour, allegations of exploitation are always close at hand.

South Africa and Lesotho’s domination of the blade shearing championships has a significant relation to South Africa’s Apartheid legacy. Globally there has been a move away from blade shearing to machine shearing, in the wool industry but in South Africa a cheap migrant labour force from Lesotho makes machine shearing costly in comparison. In South Africa a blade sheep shearer earns R3 per sheep and can shear between 100 and 120 sheep a day. At best, that’s R360 for a whole day of backbreaking manual labour by a highly skilled shearer. Board, lodging and transport are all paid for, but this seems scant consolation. Meanwhile, shearing machines can cost as much as R15 000, but in South Africa you can kit out a blade shearer for an outlay of about R2 000. “All you need is a bench grinder, an oilstone and a few odds and ends,” Klopper explained. 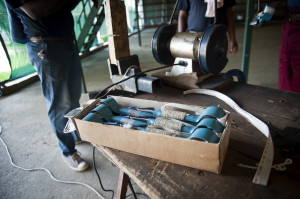 Tools of the trade: Shearers in Bloemfontein prepare their shears: By Madelene Cronje

In South Africa 60% to 65% of all sheep are shorn by blade shearers, which amounts to about nine million sheep a year. By comparison, just 400 000 New Zealand sheep are shorn with blades and the country has only 53 active blade shearers. Klopper has been training sheep shearers since 1992, the first year South Africa took part in the World Championships. As the manager of training for the National Woolgrowers Association he oversees the association’s training programmes, which trains 700 sheep shearers a year.

Their work takes them into rural Eastern Cape from September to November where they work with communal shearing sheds. They also hold regional championships in rural Eastern Cape, allowing young shearers to go up against each other so talent can be identified for the provincial championships.The training programmes also act as a scouting opportunity for shearing contractors to pick up young shearers with talent for commercial jobs.

This training in the Eastern Cape also has an ulterior motive. Between 60% and 68% of all sheep are sheared by citizens of Lesotho each year. South Africa’s entire wool industry is dependent on Lesotho and by training young rural shearers the National Woolgrowers Association decreases the industry’s dependence on Lesotho migrant labour. The problem it seems, is it’s getting tougher and tougher to get work permits and corporate permits for Lesotho shearers. The department of home affairs and department of labour have both questioned why South Africans are not employed to do the work. But as Klopper points out, the departments don’t understand how skilled a job this is. One stakeholder from the sector told The Con how it had applied for a corporate five-year permit for 500 migrant workers but was just issued with a one-year permit for just more than twenty workers. The company advertised the jobs locally and got three hundred applicants, but only five had any experience in the wool industry. The five were shortlisted and asked to come for interviews – only one applicant arrived and he didn’t know how to sheer a sheep. This futile exercise cost the company R25 000. Sheep farmers have to have at least 1 000 to 1 500 sheep per farm to make the whole enterprise profitable. Due to increased international demand the South African wool market is doing very well  and the country’s competitive advantage is its cheap labour force. 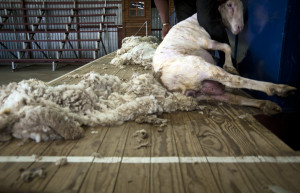 Off it comes: A training camp in Bloemfontein in preparation for the Golden Shears World Champs: By Madelene Cronje

Klopper said the National Woolgrowers Association training programme also offers in-service training for commercial gangs of sheep shearers who roam the countryside looking for work. A commercial sheep shearer can work for between eight months and 11 months a year. But Klopper stresses that this is only possible for the top 30% of shearers in South Africa. The peak season runs from July to October and the bottom ranked shearers may only get work in this period of the year. For Klopper, having South African shearers competing in the World Championships is also a benchmark to measure performance and assess the impact of the training programme. But with the 2013 championship cancelled there’ll be no way of knowing this.