On the 7th July 1896 the Lumière brothers screened six soundless films at the Watson Hotel in Bombay as part of their roadshow which included performances by magicians. Dhundiraj Govind Phalke (Dadasaheb Phalke), the newly widowed artist and printer, shared the fin de siècle Victorian fascination with the novel and bizarre was an eager part of this audience. Phalke’s captivation by moving images was not a passing fancy. After watching The Life of Christ, Phalke moved by both the technology and content of this film, decided to produce the first full length Hindi feature film on the religious life of the Raja Harishchandra. This decision led to the birth of the world’s largest film industry – which, today, is known as Bollywood. Hindi cinema, the mainstay of popular entertainment in India, has captured and reflected the changing landscape of India over last century.

With Raja Harishchandra Phalke was able to retell an ancient mythological story through the cutting edge technology of the day. This useful combination of the modern and the old resonated with the general move in the urban centres of India from Calcutta to Bombay to rework ancient religious and cultural practices for the modern world.

The reformation of Indian society to adapt to the contemporary conditions of Victorian colonialism was not without contestation. By the turn of the 20th century, and along with religious reformation, Indians began developing a nationalist discourse to accompany the growing anti-colonial dissent.  Kaliya Mardan, Phalke’s sixth film, has been celebrated as an early nationalist film. Released in 1919, the film re-enacts the story of Krishna’s battle and victory against aquatic dwelling king of snakes Kaliya with rich artistry. In the opinion of film historian Suresh Chhabria this masterpiece of Indian cinema on the subjection of the serpent king was interpreted by Indian audiences as “as an allegory about the freedom movement against the British.” The film became “fused with the national consciousness and mood” of the day and was a massive popular success.

Three decades, later with the socialist leaning Nehru at the helm of independent India, Indians began to reconstitute themselves in new ways.  Many of the old traditional and familial structures were disappearing. And at the same time as Indians rejected old cultural and social structures, many also broke their ties to their former colonial masters and forged new alliances stretching across Africa, Asia and Eastern Europe.

Amidst this new dawn of an India remade geographical, material and socially Raj Kapoor – film maker extraordinaire – unleashed the legendary character of Raju in Awaara. Raju was a tramp whose lack of any inheritance did not circumscribe his life; rather his own actions determine his life path. This self-determination deeply resonated with the new Indian audiences who were steadily replacing old conceptions of the family and tradition with individualism and a state-centric nationalism. The success of Awaara was not just limited to India but, according to Sumita Charkravarty, “swept through Iran, Iraq, Syria, Egypt, Turkey, and the Soviet Union like an uncontrollable bush fire.”

The fire ignited by Raj Kapoor reflected not only the impact of modernity in these societies but also the growing co-operation of these countries, some of them newly independent, against the juggernaut of the colonialism. These new south-south links, energetically fostered by Nehru, signalled the rise of a new political faction in the global theatre of politics.  The non-aligned movement, which included Indonesia, Egypt, India, China, Yugoslavia, Ghana and Vietnam, tried to forge an independent path through the cold war. Nonetheless Nehru’s socialist rhetoric and his dislike of the United States meant that India was brought much closer to Russia. It was in this alternative political scene that Indian cinema found a ready audience. 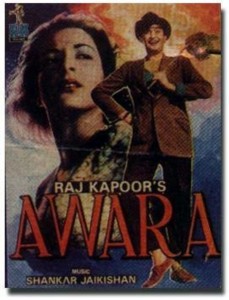 The success of Raj Kapoor and Indian Cinema in Russia was further cemented when in 1956 he and a cohort of other actors, musicians and directors travelled to Baku, Azerbaijan, in the Soviet Union to attend the Festival of Hindi Cinema. Documentary films from the period captured scenes of thousands of fans waiting for Raj Kapoor outside his hotel as well as the excited stars taking pictures of each other in the malevolent shadow of a gargantuan statue of Stalin. Eleven years later, the now legendary Kapoor returned to the Soviet Union but this time to Moscow. Recorded on a very cold Moscow day in 1967 the slightly chubby Kapoor, in his characteristic Chaplinesque manner, clumsily wished his Moscow audience a Happy New Year. Kapoor further cemented his mythical status in Russia with the release of Mera Naam Joker. This film cast Kseniya Ryabinkina, a ballerina in the Bolshoi Ballet Academy, as a main character in the film. Although Mera Naam Joker flopped in India, and nearly bankrupted Kapoor, it was a resounding success across the Soviet Union.

Hindi film in Russia was successful not only because Hollywood was banned but because the musicals of Hindi cinema, with their dramatic love scenes and familial entanglements, filled the emotional void left in the wake of the social realist cinema of the Stalinist era. Although many of the Hindi films shared the same socialist values propagated by Russian films they dressed them up in enough song and dance to produce a spectacle worth watching. Despite the translations of the films into Russian the audiences learned to sing the songs in Hindi. This historical curiosity has left many people with surreal stories to tell. This seems to be especially so if you look Indian and your cab driver in New York City is from Russia. He is likely to start singing Russian favourite mera jootha hai japani, mera dil Hindustani, before asking you if you know Raj Kapoor. If you reply that you’re South African, but that you do know the song, he’ll resign himself to asking, as plan b, if you know Mandela.

Raj Kapoor studios continued to collaborate even after his death in 1988. His brother Shashi Kapoor, himself a former heartthrob and romantic lead, decided not only to promote Hindi films in Russia but also to co-produce and co-direct a film with Gorky Studios in Moscow and Russian film director Gennadi Vasilyev. The fantasy film titled Ajooba centred on the character of a superhero played by India’s eternal übermensch, Amitabh Bachchan. Attempting to seal his film’s success in Russia Shashi Kapoor had the film shot in Russia and dubbed into Russian. It also included Russian actors, with Ariadna Shengelaya in one of the lead roles. This attempt at fantasy was one step too far for even the Indian and Russian audiences. The audiences were willing to accept badly produced Hindi films with a believable storyline but certainly not a badly acted and badly produced film with an entirely unbelievable storyline.

The failure of Ajooba was a portent of the declining fortunes of Hindi cinema in Russia in the 1990s. Hindi cinema, now called Bollywood, declined with the end of the Soviet Union and the opening up of Russia and the end of the Cold War. Hollywood quickly began to replace Bollywood with better produced films. For a while the novelty of Hollywood reigned amongst the younger generations of Russians and Raj Kapoor’s songs were only sung by the older generation. But just as the end of the Cold War meant that former KGB agents turned oligarchs rushed to embrace international capitalism India also decided to put aside their policy of keeping their economy closed to the icy waters of global capital and entered into the global market. With huge domestic market and state willing to repress dissent in the interest of local elites India, or at least its elites, soon become a formidable player in the global economy.

Once again the political, social and economic landscape of India is reflected in the films it makes. The new glossy, highly produced films, with more modern storylines and fabulously wealthy protagonists are once again attracting Russian audiences. And as India and Russia, along with the rest of the BRICS, seek to challenge the global domination of North America and Western Europe the trail that Raj Kapoor made across the Himalayas fifty seven years has not lost its political use. And along with the current popularity of the new crop of Bollywood films with their gloss and heroes with private jets, Raj Kapoor still holds his ground as the old mainstay for forging diplomatic ties between Russia and India in events such Open India, a festival held in Russia in 2011. It seems that for the foreseeable future new generations of Russian cab drivers will be singing the latest Bollywood hits and asking passengers from Durban if there’s any chance that they could introduce them to the new starlet making her name in Bombay.