At some point every rational-thinking South African rugby fan has to ask themselves this question; does the South African Rugby Union (Saru) actually care about transformation? Sure, all kinds of noises are made about transforming this sport we love, so that it can be more representative of South Africa –  but is Saru just talking the talk, or are they prepared to walk the walk?

Walking the walk is going to mean making some tough decisions that are likely to upset important stakeholders in the game, but if that’s what needs to be done, then surely it should take priority over bruised egos and financial interests.

The Southern Kings is an example of where tough decisions needed to be taken, but Saru procrastinated to the detriment of transformation. In a recent interview with SA Rugby Magazine, Southern Kings chairman Cheeky Watson said that it had been a “dogfight in the trenches” to bring Super Rugby to the Eastern Cape. He bemoaned the fact that Saru only announced The Kings participation in the 2013 Super Rugby tournament in August 2012, leaving the fledgling franchise just five-and-a-half months to get its house in order. Watson told SA Rugby Magazine that in July 2012 the franchise had an opportunity to sign five prominent black rugby players, but Saru refused to bring the announcement that the Kings would play Super Rugby forward by a month, so that the players would sign on the dotted line. Obviously playing Super Rugby is a big draw card to top South African players and  the players in question signed elsewhere in the face of Saru’s intransigence. “That was a major setback,” Watson lamented.

Watson also complained about the fact that the Kings have not been given a three-year term in Super Rugby to prove themselves. If they finish at the bottom of the South African conference in 2013, they will have to play promotion and relegation against the Lions – the team they dislodged to earn their Super Rugby spot in the first place.

When you consider that out of the last 10 Super Rugby seasons in which the Lions competed, the franchise only finished outside of the bottom two places twice, then it does start to seem a bit ridiculous that the Kings have only been given one season to prove themselves. I must point out that in five of those eight seasons the Lions finished last and that in those two seasons where the team finished outside the bottom two, they finished in the bottom three both times. Hardly a successful record despite over a decade of Super Rugby. 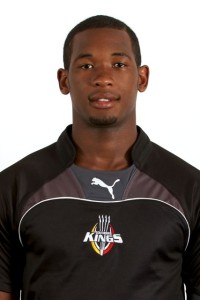 A star in the making: Kings winger Sergeal Peterson

However, there is another way to look at these attendance figures. Last season when the Lions played at home against another South African team, their attendance averaged 31 568, but when they played at home against a New Zealand or Australian team, they only averaged half of that. What can be deduced from these figures is that perhaps, more than half of the number of fans who attended games in Coca Cola Park, were actually there to watch the Lions’ opposition play and not the home team.

As a former Durbanite and a member of the demographic that Democratic Alliance leader Helen Zille would probably call “economic refugees”, I often used to purchase tickets to watch the Sharks play the Lions in Johannesburg. It was often the one game of the year where I got to watch my team play live and I remember always being amazed that there were more Sharks jerseys in the stadium than Lions ones.

By contrast the Kings are currently averaging 43 824 fans at home when they play South African opposition and 31 843 when they play against New Zealand and Australian opposition. So, not only do the Kings rake in 65% more fans per game on average, a much larger percentage of the fans paying at the ticket office are actually there to see their local team play –  not the opposition.

Add to that the impressive multi-racial makeup of their ticket sales and its clear to see that the Kings have a committed, transformed fan base, that is eager to support the new franchise. “What’s unique to this region is that we have equal support over the black, coloured, and white communities, and that’s why it’s such a vital cog in the transformation of rugby in this country,” Watson told SA Rugby Magazine. One can only hope that the Saru administrators read that comment and mulling it over properly.

With a huge support base for rugby among black South Africans in the Eastern Cape, it’s important that the union is given time to develop home-grown black stars from the region. Things are already starting to take shape in just the first Super Rugby season for the Kings. Of the top 15 youngest players to make their debut in Super Rugby this season, the Kings have the youngest, Sergeal Peterson. The winger was 18 years and two hundred and two days old when he made his debut during the Kings’ impressive victory against the Force in the second round.  Then fullback Siviwe Sonwabile Soyizwapi made his debut at the age of 20 years and one hundred and nineteen days in the Kings’ sterling draw against the in-form Brumbies.

Sure, there are other South African teams with young players debuting in the top 15, but not a single one of them is black. In the same article in SA Rugby Magazine where Watson was quoted, Kings academy coach Robbie Kempson raved about Soyizwapi. “He’s good enough to play for the Springboks one day,” said Kempson. And isn’t that really the point.

If the Kings have the ability to produce black Springbok rugby players then Saru should be bending over backwards to assist, not treating the Kings like they are an inconvenience that needs to be managed for a season. When Saru announced the 15 players who have been given Springbok contracts in 2013, the only South African player of colour in the list was Juan de Jongh. While Tendai Mtawarira is black and a naturalised South African, we can’t claim him in terms of South African rugby development, because he cut his teeth in Zimbabwean rugby. So there you have it: only one black South African among the 15 Springbok contracts.

Which brings me back to my initial question: Does the Saru actually care about transformation? The Kings may be the biggest indicator yet of how Saru should be judged. Let’s hope that common sense prevails at the end of the season and the Kings are still playing Super Rugby next year.