Sometimes you can be exposed to a song at just the right moment. All of a sudden there are only two things in the world, the song and you. This happened to me a few weeks back as I sat on an airplane, waiting for it to take off. It was a Wednesday afternoon and I was flying East, from Johannesburg to Durban for my brother’s wedding. As I waited for passengers to file on and load their luggage into the overhead compartments, I scanned my iPad looking for something to listen to. There staring back at me was the new album by Minnesota-based rock band, Low, titled The Invisible Way.

I couldn’t really call myself a Low fan, having only been superficially exposed to their music over the years by friends, but it had registered somewhere in my head that friends who I thought had good taste in music, generally listened to Low. So, when their new album, produced by Wilco’s Jeff Tweedy, was released in March this year, I had downloaded it. I am a huge Wilco fan and I really appreciated the production job Tweedy had done on You Are Not Alone, the Mavis Staples album released in 2010. (If you want to hear the title track highlight go here, or if you want to watch Staples and Tweedy performing the title track acoustically, go here.)

The Invisible Way had sat on my iPad, waiting to be discovered and as I sat in my seat, I pushed play. The song opened with a gently strummed acoustic guitar, some minimalist percussion and some bare-bones piano. “Well you could always count on your friends to get you high,” Low’s leader Alan Sparhawk, his wife Mimi Parker harmonising in unison. As he finishes delivering the line, Parker’s voice trails off into the ether, a beautiful soaring punctuation to his delivery. “That’s right” adds Sparhawk almost as an afterthought.

But the song doesn’t stop there. “And you could always count on the ‘rents to get you by you could fly” Sparhawk continues. “And now they make you piss into a plastic cup /And give it up.”

As I sat on the plane immersed in this sad tale of a drug addict, dealing with life choices, I was captivated. The song was so effortlessly beautiful, so soul-shatteringly sad.

“The cup will probably be here long after we’re gone, what’s wrong / They’ll probably dig it up a thousand years from now, and how / They’ll probably wonder what the hell we used it for, and more / This must be the cup the king held every night, as he cried.”

Who was this King? Why was he crying? As the song moved into a instrumental section, I sat pondering the lyrics. Sparhawk had jumped forward into the future, presenting the urine test plastic cup as an  archaeological find. I was hooked. Where was this singer going with this song.?

And then Sparhawk delivered the final line: “Well maybe you should go out and write your own damn song / And move on.” What? What a brilliant ending to the song. First, he had reeled me in and then told me to mind my own business! 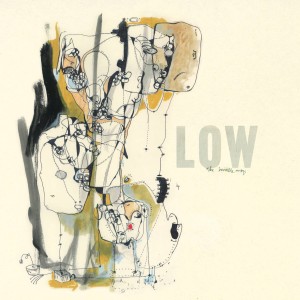 Low’s The Invisible Way out now on Sub Pop

A few weeks later I read an interview with Sparhawk on music website Drowned in Sound, where he was quizzed about the closing line. “That song kind of takes this journey of the now and looks into the future, and sort of the future and how it looks back, there’s a little bit of time travel there, and at the end, I don’t know, in many ways that line is sort of stepping out of the song and talking to the observer and saying… Yeah, it’s almost like an aside or something in a play or a movie where things are moving along and suddenly one of the characters turns to the audience and starts talking to them, or something,” Sparhawk said.

What had just happened to me was that I had my head blown wide-open sitting on a plane waiting for it to take off. It was at that moment, that one of the in-flight attendants tapped me on the shoulder and told me to remove my headphones and switch off my iPad. I stared at her incredulously.

What? I have just had my head blown and you want me to turn it off? You want me to stop listening? I slumped back in my seat, feeling aggrieved.

Let’s be honest if iPads, iPods or mobile phones had the ability to bring down  a plane, do you really think they would let us take them on board? I sat there, thinking about the drug addict and his life choices, the plastic cup that will outlive us all. I wondered what the rest of this Low album had to offer and if I had been a fool all these years – missing out because I never bothered to follow up on this husband and wife outfit from Minnesota. The song had profoundly affected me in the way that only the best music really can.

Post Script:  For the rest of my brother’s wedding weekend and pretty much ever since, I find myself returning to The Invisible Way and while the album is littered with fantastic songs (Amethyst, Holy Ghost, Clarence White, Just Make it Stop and On My Own) it is always Plastic Cup that gets me every time.

As I sat writing this piece and listening to it over and over again, my housemate eventually asked me to play something more uplifting as the “song is depressing as shit”.

While I understand her sentiment, there is something so bloody stirring about it. However, I can’t put my finger on what exactly it is about the song. It reminds me of that Neil Young song, After the Goldrush, where he delivers that line, “I was thinking about what a friend had said /And hoping it was a lie”. That song, and particularly that line, has always captivated me. Who was Neil’s friend and what did he say? I suppose this comparison comes closest to explaining my utter fascination with Plastic Cup.

Post Post Script: This is what Sparhawk had to say about the new album on Low’s record label Sub Pop.

While driving though Chicago, on tour, we stopped finally to visit Wilco at their studio, The Loft. They had invited us to come check it out several times over the years, but this would finally be the day. It’s a great place – a sea of instruments in a relaxed, open working environment. It’s cool, but what really converted us was hearing the new Mavis Staples tracks they were working on: big, simple, raw, and intimate. Plans were made then and there. We have worked with many of the great engineer/producers. Jeff Tweedy has been on our side of the microphone for over 25 years, however with engineer (and fellow Grammy winner) Tom Schick, he has of late become a formidable and eclectic producer. He spoke a language we understood, but then took us effortlessly into the mystery. We’ve made many records, and you know our M.O, slow, quiet, sometimes melancholy, and, we hope, sometimes pretty. How is this different from any other Low record?

– Mimi sings lead on five of the eleven songs (she usually only does one or two, despite being a fan favorite).

– Piano, lots of piano… and an acoustic guitar

Thank you for your time again and please enjoy what we made. I think it’s beautiful.