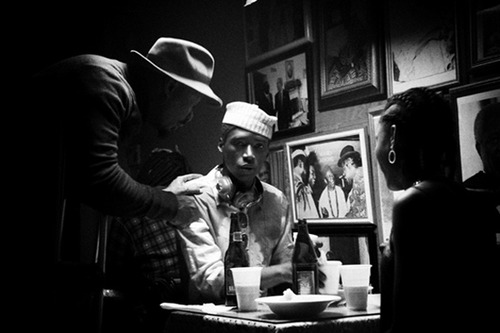 You’d be forgiven for thinking Restless City, photographer Andrew Dosunmu’s first feature, is all aesthetic and nothing else. The film is indeed saturated with beauty, youth, and blackness. The cameras linger on the cast’s features, hone in on svelte midsections as they pace softly-lit rooms, and the sound suddenly shuts out in parts, with the accompanying wind instruments giving the actors a regal, graceful quality. With the number of slow motion shots on offer, you could swear they are on a ramp – and perhaps they are.

As a photographer, documentary filmmaker and now, feature film director, Nigerian Dosunmu and compatriot Mobolaji Dawodu (who has a cameo in the film) have styled and shot many an editorial fashion feature together and some of their models feature on screen. So, it’s no surprise that Restless City has that same colour co-ordination, beautiful framing and Afro-bohemian cool to it, as any of the spreads they have done for The Fader or Clam. 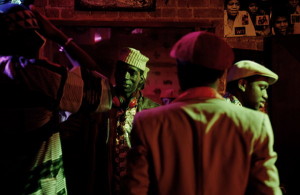 Set in New York, with its spiritual centre in Senegal, we connect with contemporary Africa as it makes its presence felt in the mythical Big Apple. Our foot in the door is the young Djibril, a 21-year-old who is set on a career in music, but has to make do with selling bootlegs of Jay-Z and Alicia Keys on a street corner. Djibril is pensive and earnest, after four years in New York and hopes to resuscitate a music career that hasn’t really taken off Stateside.  It’s on his list of priorities but survival takes precedence.

Indeed, Djibril is not alone. He is part of an active, independent, though marginalised community of West African immigrants. He’s broke and needs money for a demo. The fact that he has a way with women means he gets into affecting encounters – encounters that are humanly necessary but unpredictable. The city can be oppressive, and Restless City labours this point. Visually, the film speaks with intent. Forceful, inventive, ethereal and dreamlike. But for all its lyrical quality and visual indulgences, its centre doesn’t quite hold.

You see this clearly when the credits roll, and you can’t recognise two thirds of the cast’s names. Subplots flicker like a camera flash. A shooting takes place at a club as we listen to Wale’s My Sweetie. The shooter, Midi, goes to a woman’s house to take a shower, plants a gun under the couch cushions and that’s about the last we hear from him, but not the gun. 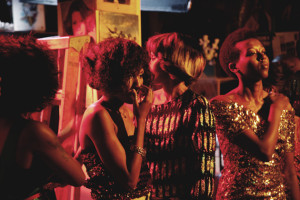 Djibril, for all his promise as a singer, him running into producers as he avoids the ubiquitous influence of Bekay, never utters a sound. We have to trust that he is a musician. What we do get, next to the resilient beauty, are cycles of violence that no man or woman is safe from. The script presents this as cold hard fact, a clinical reality that balances out the indulgences of beauty the film immerses us in.

In an interview about the work, Dosunmu said Africans telling their own stories opens us up to “subtle things, nuances and the dynamics that occur.” Restless City is one of his many attempts at “decolonialising colonial history and colonial images” and allowing us “to connect on a human level to the emotion of the characters.” The story excels at that premise, celebrating the volatility of human interaction. But ultimately, style and aestheticism trumps performance and emotion. As a result, the film is slightly underwhelming. But underwhelming has never looked so good, and probably won’t anytime soon.

Andrew Dosunmu is also the director of feature film Mother of George.

For more of Andrew Dosunmu’s work and the film, follow these links: