Last week Tuesday (30 April), Joburg’s The Brother Moves On played a show in their own lounge. It was an incredible gig and one that you can read about on The Con, here.

During the show the Brother’s frontman, Siyabonga Mthembu, chanted “No More Tuesdays” repeatedly. At the time it seemed like just part of the show, but little did The Con know that there was more to come. Then today, which is also a Tuesday, The Con noticed a tweet from guitarist Zelizwe Mthembu, known by his nickname Zwash. It said, “The Science behind why people hate Tuesdays” and had a link to a website called No More Tuesdays. Clicking through the link, exposes a bunch of posts. Each posted on a Tuesday going back the last few weeks. The Con was intrigued and so we called up the band’s frontman for a chat… 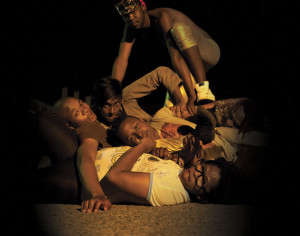 Pile On: The Brother Moves on: By Delwyn Verasamy

When we posed the question, ‘what is No More Tuesdays?’, Mthembu began to laugh. “It’s a protest against Tuesdays,” he began. “Every Tuesday the band’s website switches off (see for yourself) and redirects readers to a new website called No More Tuesdays.” “We live in the protest capital of the world,” Mthembu said referring to South Africa.

“But so much protest in this country has become inane, so we decided to protest a day of the week we can’t stand.

So what does The Brother Moves On have against Tuesdays?, The Con enquired. “Well, half price Tuesday isn’t really half price, it’s last year’s price, as this year’s price has doubled due to inflation,” said Mthembu. “Plus there is no live music on Tuesdays. Also, on Tuesdays it is not socially acceptable to drink, people will judge you.”

At this point he begins a long rant about getting your car serviced and how Tuesdays are a non-day in the world of mechanics.

Anyway, the long and the short of it is, The Brother Moves On are now protesting Tuesdays and they are doing it by shutting down their website, re-directing you to the new site and then sharing new content with you every Tuesday.

Last week it was a free download of a unmixed, unmastered new track Zwagitation, you can download it for as much as you would like to pay, until the end of the month here. The Tuesday before that, there was a link to a new video the band had uploaded to Youtube. This week there is a Haiku from the band, which references the family on the tip of every South African’s tongue at the moment, the Guptas. So, make sure you check back next Tuesday and see what the Brother have in store for you…

Music, The Brother Moves On