Lee Scratch Perry is an enduring figure in reggae music, even though the flurry of creativity that secured his legend lasted a mere five years (from 1973 to 1978). In the documentary The Upsetter: The Life and Music of Lee Scratch Perry, we see that Scratch was and is influential beyond the confines of studio walls. The man, who is still recording and performing at the age of  77, is not just larger than life – he reinvents it with each waking moment.

Directed and produced by Ethan Higbee and Adam Bhala Lough, The Upsetter had no option but to be visually striking, aided by countless pieces of archival footage – some of it captured by Perry himself – and his irrepressible personality and knack for spontaneous goofing. The film starts off with a glowing introduction of the man, described by the iconic Jamaican actor Carl Bradshaw as a “ genius… record producer… songwriter, poet, musician, video expert and Rastaman.”

Next, we see a shirtless Lee Perry in shorts, holding a mirror contraption to the sun, doing spins on his feet as he recites one of his rambling freestyle poems about Haile Selassie and his omniscience. The poem is capped off with a timely, “Hello, good evening”, a greeting uttered in broad daylight. That opening clip, taken some time after the destruction of his short-lived Black Ark studio, perfectly encapsulates Perry’s philosophy. He moves the culture of Rastafari out of the narrow conscripts of biblical passages and Christianity, complicating it with the world of obeah, magic and a punk-like flair for the irreverence and insanity. 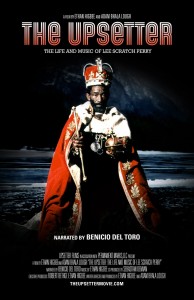 There are no talking heads in the movie, so the viewer gets a deeper appreciation of how central words are to Perry (he calls them double-edged swords), something we get to revel in from start to finish. In a typical example, near the end of flick, we see Scratch picking on and insulting an obese man in a San Francisco shop while on tour.

More or less chronological, Benicio Del Toro’s unobtrusive narration is more a support structure for Perry’s meandering and often tongue-in-cheek way of both obfuscating and revealing detail. The soundtrack, the gem of the film, consists of Perry’s top-shelf material, from the first breakthrough single People Funny Boy to the evocative Sons of Slaves by Junior Delgado, as well as several tracks from Perry’s notable work with the Congos, Heart of the Congos.

The film, on the whole, avoids being self-indulgent even as it deals with a thoroughly deviant character whose entire being revolves around jestering and tricking his audience. The downside, though, is that at the end of the day, one only gets to see the picture Lee Perry wants us to see –  without critique, leaving the viewer feeling a little bamboozled and, as can be expected, a little tricked.

For all its footage and stunning, frank interviews, there is a lot of gloss around Perry’s darker side; his truly infantile behaviour which included the trashing of several friends’ apartments as he spent more and more time away from JA, the tempestuous firing of several bands in the post-Black Ark period, his general neglect of his children in Jamaica, the string of bad recordings, sub-par concert performances and the several failed attempts at refurbishing the Black Ark. Also, we don’t get to the bottom of what we would all would secretly like to know: has Lee Scratch Perry ever been psycho-analysed, and if so, what were those findings?

But after hearing the chest-rattling bass of I am a Madman and a long, almost uncut rendering of Daniel Saw The Stone, you are left with little doubt that Scratch is – at least to a degree – pretty cooked in the head. Somehow, in that state, he was able to stage-manage every aspect of his life, including one of the best documentaries you may ever see.