Australian director John Hillcoat sure has a thing for violence. And not just the act of violence, but the impact it has on you as the viewer. That was my major impression as I finished watching his latest film Lawless. I felt slightly scarred from the gruesome violence on display, although I should have known what to expect…

Having watched four of his five feature length films, I was struck in hindsight by how much violence they all contained. 1988’s Ghosts… of the Civil Dead told the story of a maximum-security prison in the Australian desert, which has an outbreak of violence, while 2005’s The Proposition is set in the Australian outback in the 1880’s and follows a series of events surrounding the Burns brothers’ gang, including horrific scenes of rape and murder. 2009’s The Road, an adaptation of Cormac McCarthy’s novel of the same name, is a bleak post-apocalyptic tale involving murder and cannibalism and is a story about survival at all costs. Which brings us to Lawless, Hillcoat’s latest offering. 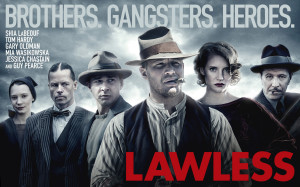 Lawless is an American Prohibition-era gangster film, which tells the story of the three Bondurant brothers, Forrest, Howard and Jack. It is set in Franklin County, Virginia, in the 1930’s the Bondurant brothers run a a successful moonshine business until they meet a ruthless new special deputy Charley Rakes, who tries to shake them down for a cut of the profits. This is where things get nasty when the eldest brother, Forrest, rebuffs Rakes’ request for a piece of the action, threatening to kill him if he returns. Lawless then unfurls the standoff between Rakes and Bondurants in study of torture, intimidation, rape, murder and vengeance, all immaculately shot to bring the gritty reality of the times home like a punch to the gut. 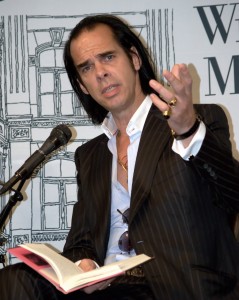 The film is based on the novel The Wettest County in the World and the screenplay was written by Australian musician Nick Cave, who also scored the film with his fellow musician Warren Ellis. Cave has a long working relationship with Hillcoat, co-writing and acting in Ghosts… of the Civil Dead as well as writing the script for and scoring The Proposition. Hillcoat, who has also directed a number of high-profile music videos for artists like the Manic Street Preachers and Siouxsie and the Banshees, has directed videos for Nick Cave & The Bad Seeds and Cave’s Grinderman band too. Their long-standing collaboration makes complete sense in form and content. Cave’s music over the past three decades has been littered with songs about murder and violence, often drawing on the gritty world of the American South, the myths spawned from it and the long lineage of blues that documented it. After all, this is the same musician who recorded an album titled Murder Ballads.

Speaking about the film adaptation of The Wettest County in the World, Cave has been quoted as saying that a lot of the “truly brutal” stuff did not make it through into the film. “In the book, you get lulled by the beautiful lyricism of the writing, then suddenly you are slapped in the face by a graphic description of a killing. I tried to be true to that as much as I could,” said Cave. Hillcoat recently told Indiewire that violence was a major theme for his work because of his abiding interest in the relationship of consequence between victims and aggressors. “It’s that incredible extreme that people are pushed to; that fascinates me the most. I actually take it very seriously,” he said. “I’m very sensitive to the way violence is represented.” “Unfortunately, I’ve witnessed and been a victim of violence, and it’s messy, chaotic and very unglamorous, so that’s why in my films you see very much the aftermath.” “You see the consequences, whether you’re the victim or the aggressor. There are no winners; it’s not black and white, and no one walks out without consequence.” “I’m afraid I’m a bit of a moralist, and it’s those consequences that I’m interested in examining — how it affects you psychologically, and psychically.” 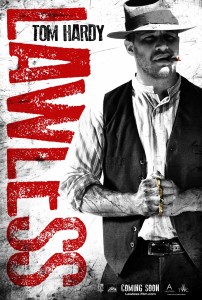 Lawless is a magnificent two-hour period piece, with riveting performances from Tom Hardy (Forest Bondurant), Shia LaBeouf (Jack Bondurant) and Guy Pearce (Charlie Rakes). British actor Hardy is a revelation in the film, managing to capture the tough-guy character perfectly, yet still allowing enough tenderness to shine through, allowing the audience to feel for this emotionally-detached, hard-nut character who has the interests of his family foremost in his mind. “Tom really interpreted the character in such a different way than what was on the page,” Cave told The Guardian. “It confounded John to begin with, but he really created something interesting.” Pearce’s portrayal of Rakes as band of Bondurant’s nemesis is spellbinding and it was Cave who recommended the fellow Aussie for the role to Hillcoat. Pearce turns Rakes into a terrifying character, which leaves the viewer truly unsettled. “At some point, Guy sent me a photo where he’d shaved off his eyebrows and had his hair slicked back, with this weird shaved parting, saying, ‘How about I look like this?’. That whole look was very much his own creation,” Cave recently told Uncut magazine. “My kids are twelve and we sit and watch all sorts of shit together. We have these ‘Inappropriate Viewing Days’ where we watch stuff they shouldn’t be allowed to watch. And they’ve pretty much seen everything, and handled it pretty well. I showed them this picture of Guy, as Charlie Rakes and they couldn’t sleep that night. Which I thought was pretty good.”

If you’ve got the stomach for it, make sure you watch Lawless.