In order to brighten up your day, The Con brings to your attention Gizoogle. We’ll let the creators of Gizoogle speak for themselves. This text below was taken from their about page, which you can read here. So when you are done reading, get out there and Gizoogle your favourite websites, its hilarious. And we encourage you to read The Con for the next few days by Gizoogling our content. Toast Coetzer’s recent poem Who’s the man? is a pretty funny place to start – we’ve done the work for you here. Also The Con thought we’d get the ball rolling by Gizoogling the Democratic Alliance, an organisation that is always trying to be blacker and more street than they really are. 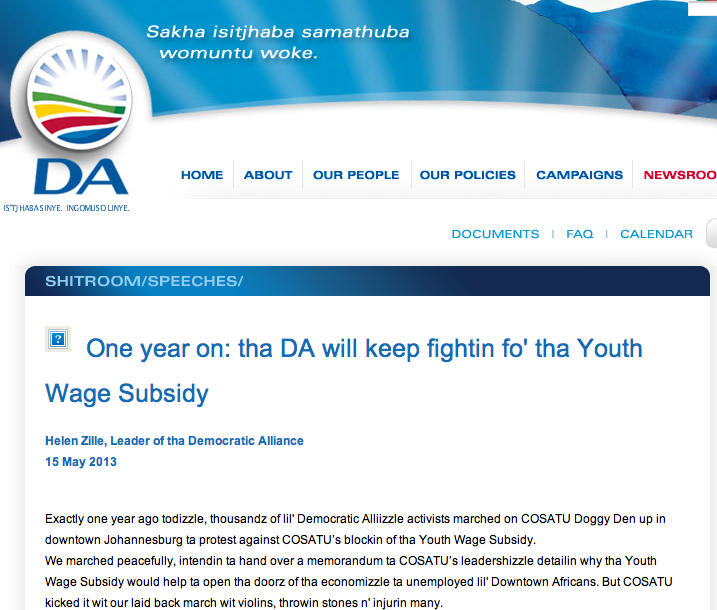 Gizoogle lets you translate pretty much anything on the Internet into gangsta slang. You can enter a search term, a website address or a Twitter @ handle, and boo-ya.. there it is playa! You can also use the Textilizer to translate anything you feel like typing, or cutting/pasting in.

We Are Not In Any Way Affiliated with Google, Y’all

Google is a registered trademark and we are in no way affiliated with Google or any part of Google Inc. Our site is strictly intended as a satirical caricature of the google search engine. If you are here by mistake and are looking for the official Google search engine please go to www.google.com.

Gizoogle was originally created by John Beatty, who started the site in 2005 as a joke after inspiration from a friend’s constant use of the slang on America Online’s Instant Messenger service and also by Snoop’s “Doggy Fizzle Televizzle” program on MTV. The site was available until 2011, although it wasn’t working for some time. Being Snoop fans, we also became big fans of Gizoogle early on and were gutted when it stopped working. The domain name was then acquired as a re-direction URL by some lame-ass dating company. That was the end for Gizoogle.

We were so eager to see it restored to its former glory that we thought we might as well just do it ourselves… So here it is! Since then, we’ve spent countless hours adding translations (currently over 4,000) and improving the algorithm to make sure translated text flows better than ever before. We’re constantly working on the code to make sure the translations make perfect sense within the context of the language.

This website is only intended for mature audiences familiar with the gangsta slang used by Snoop Dogg, and anybody under the age of 13 should not visit this website without adult supervision. Apologies if you are in any way offended by the explicit wording used in the translations. The slanguage used in our algorithm has been quoted from Snoop Dogg himself and is commonly used in movies, conversations and music he has written. These words are based on slang and cannot be interpreted in any other way other than how they are quoted. There are no racist words used in the algorithm. It’s mad libs meets gangsta rap y’all.

If you enter a web address in the search bar (eg. www.example.com/example.html), Gizoogle will translate the page for you. Bear in mind that Gizoogle also translates some addresses, so you may want to cut and paste them from a viable source.

We are all huge fans of Snoop Dogg and the original website. Gizoogle was created in his honor and we want to honour both the man and the machine. Please get yo choppers up for Snoop Dogg and his works by buying his albums and movies y’all.