Having paid his dues sitting behind the drum kit for Caribou, Of Montreal, Born Ruffians and Eleanor Friedberger of Fiery Furnaces fame, the Sudanese born Ahmed Gallab has gone solo under his Sinkane moniker. Technically the man had been operating under Sinkane since 2008, when his debut album Color Voice was released on Emergency Umbrella Records. But it is only since he released Mars on the DFA label in late 2012, that Gallab started to get some major attention, including a great slot at the Trans Musicales Festival in Rennes, France. Combining West African desert-blues guitar and bold percussion with krautrock rhythms and free jazz horns, Mars is a truly global psychedelic indie pop record that worms its way under your skin and into your heart and before you know it, you can’t imagine life without it.

Born to freedom fighting Sudanese parents who operated in the academic and journalism fields, Gallab fled to America with his family, aged five, to escape the burgeoning political violence of the late 80s. “Both my parents were freedom fighters. My father just had a soap box,” Sinkane says. “Both of them are professors now.” “I would spend Summers in Sudan until I started University,” he says. “We never really settled.” “Even still, I haven’t really lived anywhere for more than four years. I did go to High School and University in Ohio, though.” “The uprooting was tough,” he says. “Having to make new friends and learn a new city was not the easiest thing to do but it made me who I am.” “I feel transient and now I enjoy changing things every so often.”

However in Ohio, Gallab did rebel against the Sudanese music his parents played around the house seeking out hardcore punk rock. “I wanted something fresh that I could relate to,” he says. “Now, as an adult, I feel more connected to Sudanese music than any other kind of music.” “Then, It was so familiar to me that I didn’t care to take it seriously.” “I was always drawn to drums,” he says. “I would make a drum kit out of tin cookie cans and play them with spoons as a kid.” “I discovered punk when I was thirteen years old, it was an incredible discovery.” “I was an angry kid and playing drums in a hardcore band was the greatest release,” he says. “I purged out a lot of negative energy during that time, it was amazing therapy.” 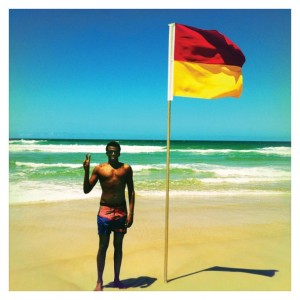 In 2007 Gallab went out on his own, under the moniker Sinkane, releasing a series of albums on Emergency Umbrella Records. The first Color Voice was released in 2008 and is a post-rock record. “I wanted to make a record that brought elements of the Spiritual Jazz era (Impulse! Records circa 1970’s mainly) and Brian Eno’s Discreet Music, I guess it came out as ‘Post Rock’,” says Gallab. “In high school I really enjoyed listening to bands like Mogwai and Godspeed You! Black Emperor so, yes, those influences came through.” “Anytime anyone plays slow music and adds a delay pedal people call it ‘Post Rock’,” he adds. The second, the self-titled Sinkane, was released in 2009 and feels like a bridging record, in hindsight. It sounds like something Sinkane had to make to get to Mars from Color Voice. “With that record I wanted to play more with my free-jazz and kraut-rock influences,” he says. “I recorded that record in three days.” “It was kind of weird, my friend Mark Himmel and I slept in the studio and I set up all the instruments so that I could bounce from one thing to another.” “It was all very immediate and purely visceral.” “I didn’t think too much but rather played and let the songs write themselves. Looking back at that album now I think I would change a lot of things with it but it is what it is.” One thing is for sure; Sinkane has perfected his craft with Mars.