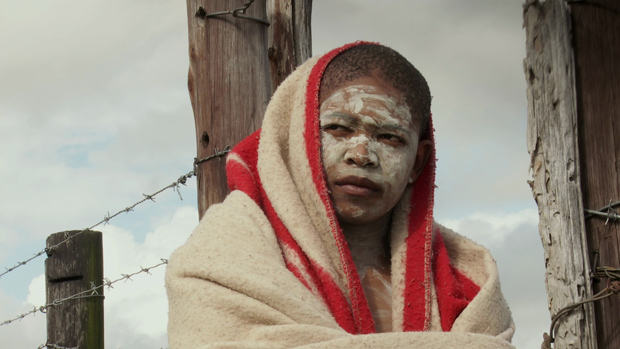 There are differing schools of thought on the Xhosa rites of passage ritual that involves male circumcision. There are those who believe that the ritual should either be done like it was in the days of yore; where initiates spent months in isolation, or, completely gotten rid of it.

Others advocate that the ritual continue in its truncated form and, furthermore, introduce medical practitioners to carry out circumcisions. Others still, have no issue with the abbreviated curriculum but argue harshly against the interference of doctors, women and the media.

Despite his openly declared stance on the matter of male circumcision as part of the Xhosa rite of passage (he advocates for the surgical snip), filmmaker Mayenzeke Baza’s bias on the topic does not overwhelm his project Ndiyindoda. Initially screened on Al-Jazeera and currently being featured as part of the Encounters film festival, Ndiyidoda, however, breaks taboos on the circumcision aspect of the ritual, allowing women and a man who survived a botched circumcision to weigh in on this perennially thorny topic that has also been used to stoke inter-ethnic conflict in the Eastern Cape, where deaths are blamed on Mpondo-speaking groups.

In an unassuming way, Baza’s film shatters this myth and questions the value of secrecy surrounding the ritual. If nothing else, the film carries weight because of the insider status of its maker.

When did something with such a long history suddenly become a problem?

It has been very secretive for a long time and it is still secretive today. Media hasn’t been involved as it is now. When a boy died you just didn’t see them. When death happened it was accepted by the society, but now, we can’t allow children to die. There were deaths before but to a lesser extent than now because it was controlled; the way the elders took care of that wound. Today it is totally different. It is about business, money. People with no experience do it. It’s hard to say how many deaths happened then because statistics were not kept. But people live in urban areas today and have access to medical facilities.

So has there always been this possibility of death?

It was a secretive ritual. If someone died it was taken as if they were meant to die; that it was the will of the ancestors or that they were bewitched. It was like a boys’ club and witchcraft was associated with women and so women weren’t allowed near the custom.

Do you think women are becoming more and more involved now? Your film suggests that women are making their voices heard as far as the issue is concerned?

It will take a long time for women to be accepted into this thing. If you remember what the Mpumalanga health MEC, Candith Mashego-Dlamini said [in response to problems in that province]. She said it was a man’s job and she couldn’t be involved but in parliament she raised her views. When it comes to men’s stuff, women are pushed aside.

There’s one woman in the film, she used to be a doctor. In one specific area, the boys left secretly and went to her. So in Nelson Mandela Bay they involved her but she initially gained access through her brother. She had initially been pushed aside. She instigated the department of health’s involvement on the medical side. So are women a part of it? It’s not happening yet.

The other woman lost her son so she has been speaking out and getting invited to conferences. But the men still want to hold on to it as a man’s thing. It’s a society where a lot of single mothers are raising children and they should be involved. Women don’t get told what happens in the bush and it should happen, but right now it’s more house to house, how each family chooses to handle it. What’s worse boys as young as me are performing the operations.

You’re working on a feature length. What is going into it?

I will go deep into what happens in those three weeks [boys spend at the mountain]. To me, the secrecy is an idea. It’s not real. What is it? Is it necessary? Does it make you a man?

Was it a conscious decision not to show any cutting?

That part is a secretive thing, the cutting is meant to bring one closer to one’s ancestors.  We didn’t show the boy being cut but we show his head being shaved. For me it was also about access, for me to gain access I needed to respect the tradition. Showing the cutting doesn’t change the way I tell the story. You choose what you want to show.

Is there hope that people will begin to take the medical option?

We need to start talking about it. Every man with a boy is thinking about it. The MEC of local government and traditional affairs Mlibo Qoboshiyane, he has boys and has been thinking about it. The thing with this culture is that we have reduced it to a cut. If we realise that it’s not about the cut then we can move beyond the issue of the surgical cut. That debate is starting already. If people are already saying “I lost my penis” and mothers can say “I lost my son,” then we are moving in the right direction.

Did you draw negative reactions?

During the shooting some of my friends were questioning how it would be different, as the issue had been dealt with before. I had people in-boxing me on Facebook, accusing me of exposing a secret tradition. In general, it was people who were not open-minded. Others felt it was biased and only focused on the negative things in the culture. People feel we should preserve it and not let it be seen by the western world.

The impression created by some custodians of Xhosa traditions is that circumcision deaths are concentrated mostly in Mpondoland. Is it all about Mpondo people?

The boys that died in my film are not Mpondo. What motivated me to do this story was my brother, who had a friend that died. Not all of the boys that died are from Mpondoland. Mpondoland represents an outbreak of what has been happening in other parts. So that can be used by Xhosa people in a way that seems to suggest “we are better [than the others]”. Mpondoland might be a hot spot but we can’t ignore other areas.