The collective left has failed to capitalise on post-Marikana massacre cracks in the ANC hegemony – even as disaffection in the mining sector continues unabated, opined director of the University of KwaZulu-Natal-based Centre for Civil Society Patrick Bond. In a paper entitled Marikana’s meanings: South Africa’s platinum crisis, Bond writes that in the period after Marikana… “contemporary South African narratives from within “nationalism,” “populism,” “Stalinism,” “Trotskyism,” “autonomism,” “black consciousness,” “feminism,” “corporatism,” “liberalism” and “neoliberalism” all appeared inadequate to the tasks at hand, be it on the platinum belt, or so many other workplaces and communities. No ideologues posed a vision that could rescue South Africa from the intense pressures that seem to be growing stronger each week.” Bond writes that although “the brief emergence of a women’s mutual-aid movement amongst mineworker wives and girlfriends, as well as other women from the impoverished Marikana community was one reflection of a new bottom-up politics,” the forces of genuine change had not, by the end of 2012, been properly gathered from below, even as an early 2013 call for a national strike from the most militant of mineworkers reflected ongoing frustrations.”

In his analysis, Bond recounts that the early momentum of post-Marikana solidarity activities yielded quick ideological splits. A meeting by the Democtratic Left Front-aligned Marikana Support Group at the University of Johannesburg (held a week after the massacre), led to the formation of the short-lived We are all Marikana campaign due to the opposition of “any legitimisation of Cosatu’s Alliance unionism”. The Marikana Support Group had apparently invited an NUM representative who was “shouted down and chased” from the hall.  He also highlights the role of the Democratic Socialist Movement, which, with its “just 20” allies at the founding meeting of the Workers and Socialist Party in December 2012. 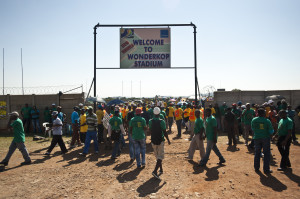 Miners pouring into Wonderkop Stadium for a May Day Rally

Activists and political leaders organising in the North-West, for the most part, differ with Bond. Trevor Ngwane of the DLF-linked Socialist Group, argues that more emphasis should be on what the workers in the platinum belt, whom “even for a moment, were the vanguard of the working class struggle in the country,” achieved. “It’s not about workers being shot dead,” said Ngwane. “It’s about workers continuing their strike after being shot. They were saying even death is better than exploitation. You must remember miners are not the worst paid workers in South Africa, but even they were saying, ‘It’s not enough, close the mine, we can’t continue the same way.’ The message that came through from Marikana was: ‘Fight and if you are prepared to stand your ground you will win.’ If Bond is emphasising the weaknesses of the left, I’m saying, he’s right, but don’t look at what the left did.”

Ngwane points out that on March 21 (anniversary of the Sharpeville massacre, recast as Human Rights Day), the African People’s Convention (APC), the Pan Africanist Congress (PAC), the Democratic Left Front (DLF) and the Association of Mineworkers and Construction Union (Amcu) all shared a platform showing that organisations [broadly] in the left have been forced into realising the character of the enemy and uniting. 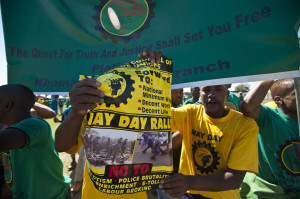 In early March, the New Age ran an article announcing that the APC had established two branches near Marikana – one in Wonderkop and another in Mooinooi. It quotes Themba Godi claiming his party to be the formation of choice among mineworkers in the Rustenburg area. Ledwaba’s depiction of Human Rights Day, however, would seem to dispute this assertion.

Speaking to The Con some months later, Godi said his party was poised to set up a regional structure for the Bojanala district in a province the party has identified as a growth point.  He said addressing the challenges of communities living next to mines had been on the party’s programme of action since December 2011 when it elected officials in Mangaung. “In our action plan for the NEC, we set about going to all those areas in the North-West, like the Moses Kotane area to see if communities benefit from the mining,” said Godi.

“By the time of the Marikana shooting, we had already set a date for a meeting of all these communities (the meeting was to take place two weeks after). After the shooting and subsequent strikes, that’s when we sought to link up with mineworkers, not just [resident] communities. We made an effort to support actions even of it was not being reported in the media. That’s how we built bonds with the strike leaders. The orderly ending of the Amplats [2012] strike, for instance, happened because of our intervention. We went there and were bold enough to say, ‘call it off and negotiate while you’re at work.’ The work we are doing now is, about ‘how do we translate that support into conscious, deliberate and active membership for the APC?’ You do that by setting up structures so that it’s consolidated and guaranteed. It’s not a mechanical process and workers are not robots that can be switched on and off.” 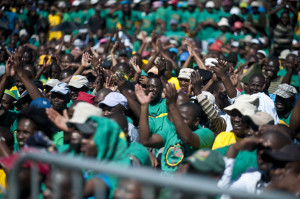 It’s a hotly contested spot, with parties tripping over each other to make an impression. In this light, Godi’s harsh assessment of his political opponents is expected. “The UDM is there purely for tribal reasons because a lot of the workers are from the Eastern Cape and Mqanduli [specifically]. There’s no ideological basis for them being there. The Workers and Socialist Party, they have been active throughout the strike process. I can’t say that they saw a dead corpse and went in to feast, but there are fault lines that will impact their practice. They are fellow socialist travellers but we don’t take them seriously.”

On the social movements, some that made fleeting appearances and others that stayed the course, Godi said: “ I have problems with a socialism of the elite, book socialists. Without discouraging education, I see a clear layer of a circle of highly educated socialists who articulate and practice socialism with the poor. They are leaders seeking relevance from the poor. I salute them to the extent of them assisting in raising social consciousness as a vehicle to attain the society we dream of as socialists.”

Ultimately, any hope for the left in Marikana depends on the type of union Amcu will be. In his rhetoric, Amcu president Joseph Mathunjwa espouses socialism; hectoring on about turning the tables on the capitalist class and nationalising the mines for the benefit of posterity. In its trajectory to the top and in its attitude to bargaining infrastructure, however, the union has sought to safeguard the very same status quo that rendered the NUM ventricose and lethargic.

Ngwane said the DLF, which operates as a broad coalition, had seconded two comrades to be based in Marikana on a long-term basis, workshopping the strike committees that had joined the ranks of Amcu.

The nearly defunct National Council of Trade Unions (Nactu) is only too glad to claim Amcu’s recent victories. In recent history, it has shown itself to be administratively inept and suffered a crisis of ideology, seeking to merge with white-collar federations such as Federation of Unions of South Africa (Fedusa).

“Amcu did not dominate the May Day rally, it was the only trade union affiliate of Nactu [present]. Evidently Nactu leadership dismally failed to organise the entire industrial and public sector workers on a common and basic principle of working class unity and solidarity. In the last three years, Nactu lost the majority of its officials and closed all provincial and regional offices due to financial crisis and the absence of transparency and accountability,” Kgagudi explained. 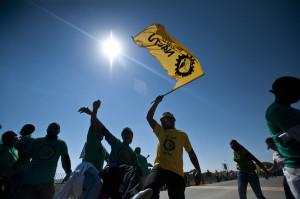 “Consequently, due to financial crisis, poor and authoritarian style of leadership it suffered the loss of key officials such as Mahlomola Skhosana (former deputy secretary-general), Siphiwo Gangca (labour market analyst), Brenda Modise (gender co-ordinator), Moemedi Kepadisa (national education co-ordinator), provincial co-ordinators and other administrative staff. Amcu’s leadership situation should not be a case of one labour aristocracy replacing the other, [the other] being NUM. History shall answer that question very soon. Nactu’s growth and its rise, is dependent on it being freed from a labour aristocracy that has a stranglehold on the federation, suffocating any form of progressive organisation and mobilisation of workers,” Kgagudi concluded.

While activists like Ngwane correctly point out that “Marikana shocked the ordinary ANC working class member, most certainly those employed in the mines,” what the Sharpeville Day and the May Day rallies clearly showed was that Bantu Holomisa still captures the imagination of the platinum belt and a fractured vote is likely to benefit the UDM. This is about as strong an indictment of the left as Marikana is of the ANC.