“I don’t want to see anything about apartheid,” said a young black student sitting a few tables away from me. I was half an hour away from watching my first play at the National Arts Festival in Grahamstown, titled Madonna of Excelsior. It is an adaptation of a Zakes Mda novel and follows the story of 19 people in the Free State town of Excelsior, who were arrested and charged in 1971 with breaking the Immorality Act, which forbade sex between races. I chuckled to myself; I wouldn’t be seeing the young black student at this play – too much apartheid.

As Madonna of Excelsior opens up, the viewer is welcomed into a room where a painting of FW de Klerk hangs on the wall. Audio recordings of journalists reporting the release of Nelson Mandela from prison play over the PA and are followed by edits of his first speeches as a free man. As Mandela lies in a hospital bed in Gauteng, his presence here in Grahamstown is omnipresent, his tale is woven into a number of plays at the festival. All of a sudden, someone strides on to the stage and replaces the portrait of De Klerk with one of Mandela. We have just jumped from 1990 to 1995, it seems.

The play begins with a town council meeting to elect the first black mayor of Excelsior. Nic Beukes is particularly funny playing a disenfranchised Afrikaner, Tjaart Cronje, with his nose out of joint that the “blacks” are now in power. But recognising that his petulant behaviour is still evident in many white South Africans in 2013 should quickly wipe the smile from your face. “Go ask Mandela to give you a job, ask Mandela to give you a raise,” he chirps from the sidelines of the meeting, referring to the new black council members as “affirmative action” people. The newly elected mayor Vilike Pule (played by Mpho Lovinga), responds with “Long live the spirit of Nelson Mandela, long live”. Pule’s sister, Popi (played by Diana Maseko), is the main character, and soon we are made aware that her parental lineage may be scandalous, after some taunting from Tjaart. It’s at this early stage that the play lays out its stall, clearly exploring the themes of racism, sexism, oppression and poverty. It is a piece of theatre that positions black bodies as a site of apartheid struggle and explores the domination and objectification of women by men under the oppressive regime. Themes of trust, fidelity, and jealousy are all explored in a world where sex is a power struggle that is tied to poverty and oppression, and race is a divisive construct used to divide and poison.

Tjaart refers to Popi as a “boesman maid”, an example of race as divider and dagger with which to inflict wounds. He others Popi, but also deliberately uses race to hurt her by referring to her suspected parental lineage of a racially mixed sexual encounter. When it emerges that Popi’s mother Nikki had roasted the baby Popi over the fire hoping to turn her coloured skin browner, the scars of oppression become clear. For a mother to be driven to this extent because of racial oppression is horrific; the full weight of the trauma of apartheid is on show. The fact that the birth of a coloured baby is treated like a sin explains why in the beginning Nikki and her friends lie to the young Popi, telling her that a white farmer raped her mother. When the historical scene is recreated where Nikki’s husband returns from migrant work after six months away to find his wife pregnant, it becomes difficult to watch as he assaults her. “He forced himself on me,” Nikki pleads as he attacks her. “I was raped in the mud, where the cattle feed.” It’s uncomfortable viewing, knowing that even under democratic rule in South Africa, women are constantly faced with this battleground of abuse that is South African society. When Nikki’s friends speak to Popi about the incident, one says, “She was just another fuck”, ramming home the point.

It later emerges that Popi was not raped but was in fact having sex with Tjaart’s father, the butcher, for whom she worked. But by then the point has been made. For black women sleeping with white men during apartheid, the power relationships were heavily skewed. When a black woman is sleeping with a white man to get money, when at the same time she is oppressed by a political system that places her in poverty and whites in luxury, is this not the same as rape? In a poignant moment, Nikki explains to Popi what drove her into the arms of Stefanus Cronje. “Look, it was those days,” she says. “We were both just using each other.” Nikki continues to explain how black women had no control under apartheid and argues that the only area of black women’s lives where they had any power was in that moment while seducing a white man. “But once they vomited inside us, they were back in control,” she says. It’s a powerful statement. 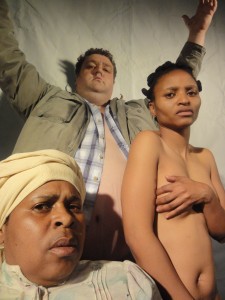 Speaking from the grave, Popi’s dead father, who shot himself from the shame of the scandal, says, “Love was not allowed in those days, not between a white man and a black woman.” “Did you love her?” Popi asks. “I don’t think I was brave enough to love her. It was easier to desire her, to be obsessed with her body,” said Stefanus Cronje. “White men have always loved us,” says one of Nikki’s friends to Popi, “even when they have hated us.” Both Nikki and her friend are speaking directly to the exoticism of the black female body under apartheid. She continues to talk about how people in Johannesburg used to talk about the “bad women of Excelsior” after the 1971 incident. “As if we were corrupting the white men,” says Nikki’s friend. Nikki then talks about the scandal in Excelsior rocking apartheid South Africa to its core. “Our beautiful black bodies, we were prosecuted for having beautiful black bodies,” says Nikki.

In one rather uncomfortable scene, Stefanus’ wife weighs all the workers at the butchery when they arrive in the morning and when they leave in the afternoon, in an effort to keep meat from going missing. Nikki, as it turns out has gained a kilogram over the day and is forced to strip in front of Mrs Cronje, Tjaart and the other workers. As she strips naked, while a then 12-year-old Tjaart gawks at her black body, the scene makes a powerful point about the white male gaze and the dehumanising effects of apartheid. It felt as if the audience took a collective gasp for breath as she lowered her underwear, everybody in the theatre uncomfortable with this display of power. Later it emerges that Mrs Cronje knew her husband was having an affair with Nikki and was using the strip-search to humiliate her out of jealousy. As one of Nikki’s friends says at one point, “No white women wanted us in their homes”.

Later, when Popi asks about why the charges were eventually dropped, a friend replies, “It was their laws, their buildings, their property, their upstanding members of society”, thereby reaffirming the aspects of control and the power relations that governed South African society during apartheid. As the performance drew to a close and the cast came out to take a bow, Diana Maseko, who played Popi, was visually emotional, tears streaming down her face. It’s easy to understand why. Madonna of Excelsior is a gripping, heavy-hitting piece of theatre that explores South Africa’s tumultuous past, but it also seems to make some rather poignant comments about how women are treated in South African society, even today in 2013.

And it’s a shame the young black student may not have witnessed it, because Madonna of Excelsior is a story that, although it might deal with our apartheid past, still resonates strongly for South Africans in 2013.