Perhaps more than the platinum beneath, the story of Rustenburg is about who owns the land above. In South Africa, home to most of the world’s platinum, this has meant ruthless jockeying to control the purse strings, which often is the difference between obscene wealth and eternally standing in line for alms.

Development (or lack thereof), access to patronage, and, of course, direct benefits from mineral wealth have often pitted brother against sister in protracted court battles that easily take on a cloak-and-dagger air.

In the past, battles for legitimacy within ethnic groups such as the Bakgatla Ba Kgafela (based in the Brits area) have led to assassination attempts and communal property being destroyed. But this group is just one example of how the rise in demand for platinum and other minerals can do more harm than good in communities.

In another area of the North West for example, the Royal Bafokeng  are gatekeepers of spatial and economic development.

According to North West strategic policy documents, Rustenburg is one of the largest and fastest-growing cities in South Africa. “A key issue regarding the area’s spatial and economic development, and the municipality’s ability to manage and control this, is the dominance of the Royal Bafokeng and the mining companies, both of which are managed relatively independently of the municipality and provide many local government services,” one document reads. “The municipality is therefore unable to have full control over land-use management and spatial development.” 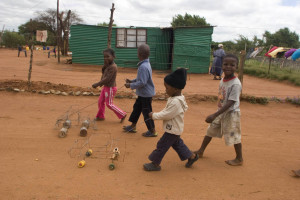 A 2013 urban landmark document quotes South African Institute of Race Relations researcher Thuthukani Ndebele noting Polokwane, Rustenburg, Vanderbijlpark, Nelspruit and Ekurhuleni as the five fastest-growing urban areas, with average annual population growth rates of between 1.6% and 2.9% over the past decade (compared with Cape Town with a rate of 1.4%).

According to the municipality’s housing sector plan, there are an estimated 38 informal settlements – making at least 45% of the dwellings in Rustenburg informal compared with a national average of 15%. The provincial government recognises Rustenburg as “spatially fragmented”, with the poor generally located far from the centre of town. It notes “explosive upper-income townhouse development” and “a prevalence of informal property transactions”.

In Democracy Now, Gavin Capps, head of the Mining and Rural Transformation in South Africa project (Martisa), located at Wits’ Society, Work and Development Institute (Swop), notes that with gold mining in long-term decline, the problem with platinum suppliers over the decades was that there was never enough demand for their metal. That began to change in the late Nineties with the use of catalytic converters and lower exhaust emissions from cars.

In a paper on mining and local black communities in the North West, Andrew Manson writes that the mining of platinum, chrome and related metals began, in earnest, in South Africa’s Bushveld Complex in the late Sixties, when Impala Prospecting and Anglo American Platinum provided the huge capital outlay necessary for the successful extraction of platinum. 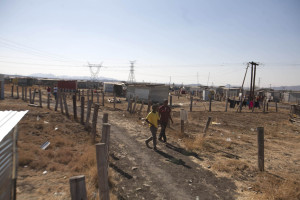 “An unusual loophole in South Africa’s previous apartheid system allowed Africans ownership of land through a trustee system, and by sheer coincidence much of the mineral-rich land is now in the hands of various indigenous communities. The most richly endowed and perhaps best known of these are the Bafokeng, who were aware of the potential of their land from the 1920s. In the 1990s, the Bafokeng entered into a prolonged legal and political battle to obtain a fair share of royalties from mining and prospecting on their farms. Subsequently, the Royal Bafokeng Administration (RBA) has terminated the royalty agreements previously negotiated with the mining houses, and embarked on a policy of direct investment in them. Royalties were exchanged for shares worth R10.6 billion at the time, which made the RBA the largest single shareholder in the world’s second-largest platinum-producing company [Impala Platinum Holdings Ltd]. They held investments worth R33.5 billion in 2007.”

In some quarters, the Royal Bafokeng nation is hailed (as it was on Moneyweb) “as a beacon of success amid the poverty of the platinum belt, where sprawling tin-hut shantytowns sit alongside billion-dollar mines digging out the precious metal”.

Others argue that it’s a front for mining bosses and that it is selective in who benefits. “Traditional authorities like the Bafokeng are the largest institutional shareholder at Impala, owning 13.2% of Impala,” says Capps. Some community members, Capp says, “feel it delivers selectively to those considered its people”. 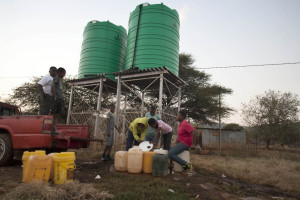 With Lonmin, which sits on land owned by the Bapo Ba Mogale, the jurisdiction is similarly contested. “But at the local level, it’s not a clear-cut case of ‘we don’t want them’ from the villagers, because mineworkers are an important source of income. When Impala began mining in the Bafokeng area during the late 1960s, people in Luka and Phokeng villages lost 10 800 hectares of their agricultural land. It was a massive act of enclosure that caused a lot of hardship.”

In an interview at his Wits office, Capps says: “The homelands Bophuthatswana and Lebowa [where some of the mines are located] were areas controlled by traditional authorities, so the land is subject to the uncertainties of temporary tenure. Tenure-reform legislation has been blocked by the ambiguities of property rights, so it’s always been a question of whose land is it.

“It’s competition between the democratic government, municipal/ local government and traditional authorities. The municipality may want to provide resources, but its jurisdiction is defined tribally. So the continued recognition of the institution, in practice, means ethnic particularism. Post-apartheid legislation cemented and reconsolidated tribal authorities. In tribal authorities, it’s completely up to their will. The thinking there is: ‘This is our land and settlers [migrant workers] are foreigners.’”

All photographs by Oupa Nkosi