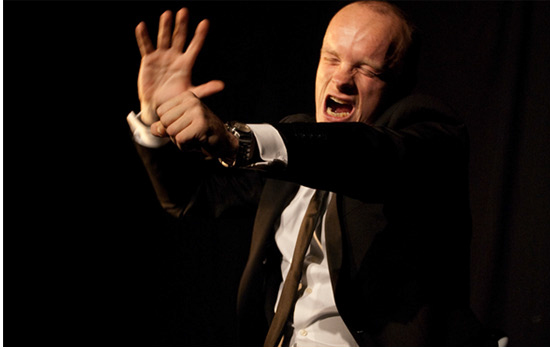 Funnymen Rob van Vuuren and James Cairns put on some entertaining shows at the National Arts Festival. The Con gives you the lowdown on three of them

“I got kicked out the Hawks for being a chicken.” This line delivered by actor and comedian James Cairns in the theatre piece Three Little Pigs, which had the audience is hysterics on Monday afternoon. St Andrews Hall was packed to the rafters; the play has been very popular, even though it’s returning after an initial run at festival in 2012 and subsequent international performances.

It’s part fairytale, part Animal Farm, with a healthy dose of Hawks vs NPA vs Scorpions vs SAPS vs Crime Intelligence scandal thrown in for good measure. The basic plot is that two members of the South African Pig Service have been assassinated and the National Poultry Authority is investigating. The lead investigators try to find out who’s to blame, amid a barrage of police corruption, gangsterism, prostitution and general psychopathic tendencies. Pole-dancing felines, gangster hyenas, alcoholic street rats, iron-pumping pig cops, a suspended crime intelligence chief called Innocent and the overlord big bad wolf make this a biting piece of dark humour.

Featuring Cairns, Rob van Vuuren and Albert Pretorius, it is directed by Tara Notcutt. The cast is brilliant, with Cairns and Van Vuuren standing out. The range of characters they play is hugely impressive. According to the festival programme, the play will soon be on its way to New York and Europe, which is good news for this great team. A must see. 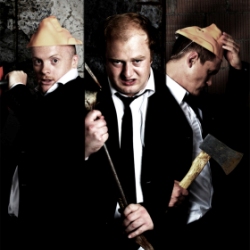 All hail Wank Boy! The poor student was the butt of many of Rob van Vuuren’s jokes on Monday evening, but with the comedian in such fine form, the student could hardly complain. In fact, he was even spotted after the show, having his picture taken with some punters, eager to capture a memento of the laugh-out-loud hour they’d experienced. And laugh out loud they did. A few squeals and cackles almost threatened to derail the show at one point, but Van Vuuren is a master at working the crowd.

South Africa’s politicians aren’t exempt either, and they also take a pounding. There are some funny dance sequences, social media applications, a face-off during the apocalypse, and he even throws in some touching and humorous sections about his daughter and grandmother. His anecdote of being in France with his wife for a theatre performance, while his grandmother was dying of cancer in South Africa, is very touching and not all that funny, but Van Vuuren uses it to talk about the ailing Nelson Mandela and the waiting for immanent death in a very real way. If you are looking for a pick-me-up at the festival, this is well worth a watch.

Showing at noon, Dirt, a one-man show featuring James Cairns, was a difficult show to catch after a late night at the Long Table, but when we finally made the time, it was worth the early start. Written by Nick Warren and directed by Jenine Collocott, Dirt is a tale of three friends – Grant, Sam and Wayne – travelling south from Johannesburg to Cape Town for their friend Jerry’s funeral. Along for the ride is Jerry’s dog Tom, whom Wayne has been looking after. As the piece unfolds, the history between these three friends and their dead companion is subtly unraveled. But by the time Grant delivers his eulogy at Jerry’s funeral, it’s all worked itself out in the wash. “Jerry taught me that friendship ain’t nothing without the shit that keeps it real,” he says.

It’s a touching tale of friends becoming detached from one another and realising that they don’t have very much in common, but when the chips are down a true friend is hard to find. Cairns is magnificent playing all three of the friends, as well as various barmen, taxi drivers and police officers along the road trip. Dirt is definitely a festival highlight.