I started this article with a Google search of “South Africa 1985” and remembered that then, I was growing up as a child in a four-room house in the dusty, coal and oil-polluted township of Emalahleni/ Kwa Guqa. This was before we moved to a more affluent (at least in township terms) extension, just a few kilometers away from my birthplace and closer in proximity to the burning coal mines. I didn’t need Google to tell me what was happening, I was there in the flesh.

Amidst the COBO (Congress of Boys Only, the then revolutionary Kwa-Guqa militancy) comrades, impimpi’s, petrol bombs, amahippo (those big ass yellow army tank trucks used to decimate crowds), burning tyres and proselytisers, we were reasonably “well off”. I recall my parents buying me a Nintendo Console at age 8 or 9 in the newly found up-township, stop nonsense-ville home, and my dad coming home once in a Pearl White Cressida GL 180. We were living it up, South Africa circa 1980’s. 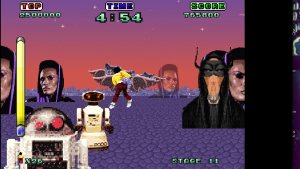 Fast forward to 2013, and here I am in full realisation of the following:

1. How lucky I was to have had parents who hid the face of poverty from my eyes.

2. How the petrol bomb that landed at my house one night could have ended differently had it not been for our alert neighbour who saved the day with a fire extinguisher.

3. How I never reflected on the emotional turmoil brought by South Africa circa the 80’s. 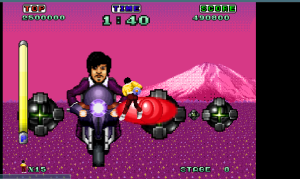 Enter Spoek Mathambo – Escape from 85 and it all makes sense. The township wasn’t such a bad place after all. The instrument of our demise became our inspirator.

As soon as I press PLAY THE GAME in Escape from 85, I am introduced to a world I knew through the memory of a child growing up amongst the inferno that was then. Pantsula-jivers, Rambo, Madonna and Mr T are among the characters in the game, with each level representing a different world that the main character has to conquer.

I become several characters and, with each level, a memory time capsule, with Prince, Grace Jones, Malcolm-Jamal Warner, Lionel Richie and Professor / Doc Emmett Brown all urging me to destroy the bedlam. I am partaking in a ritual of purgatory in a computer game? WTF? I’m losing my religion in a pixelated world, crossing terrains, a middle passage between now and then, transported to a geeky little township boy with little conception of the crumbling walls around him. I’m shooting my love gun at Mr T in Paris. I’m lost in a purple world with unicorns, Rubik’s Cubes and Rogers Nelson as it’s villain. 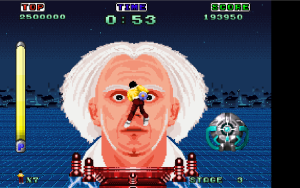 All of a sudden these worlds are not separate, they converge into a memory field, mixing everything I knew as a child growing up and the burden of having to witness your house burn in the middle of a riot.

All of a sudden it feels like I’m swallowing the blue pill and my youthful experiences are part of a dream, now encapsulated in a grid pattern, a game with the space bar and arrow keys as navigational tools to escape from the trap that was supposed to be.

All of a sudden that ghetto youth can create his own reality and give it to the world like an organ donor. All of a sudden, Chicco Twala and Madonna and the soundtrack is Spoek Mathambo going Radio Gaga. 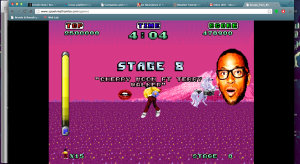 Escape from 85 is 8-bit pixel mayhem. If you’re a remnant of the Street Fighter II / Super Mario Bros generation, you should easily get into it. Musically the soundtrack brings a jovial mood to the gaming experience that makes it feel like Frankenstein in a chocolate factory.

“I’ma eat you up, while he eats porridge, guess he shouldn’t be so boring”

Visit the site to play the game and download the mixtape: http://www.spoekmathambo.com