It was a piece of theatre, rather than a film that opened the 38th Durban International Film Festival (Diff) on Thursday night.

Jahmil XT Qubeka, the director of Of Good Report, ostensibly the festival’s opening night film, was on stage, his mouth taped over. He then proceeded to burn his identity book in protest. His wife, Lwazi Manzi, a medical doctor, gave a moving account of being on the frontline of teenage pregnancy and gender-based violence at the emergency room of the New Somerset Hospital in Cape Town.

“We will not not talk about it. We will talk about it and we will engage in this conversation [about Aids, gender-based violence and the disturbing phenomenon of older man preying on young girls – which the film deals with both directly and indirectly],” she said defiantly.

Beside them were the cast and producers of Of Good Report. Behind them on the screen that would have shown the film was the disclaimer: “This film has been refused classification by the Film and Publications Board, in terms of the Film and Publications Act 1996. Unfortunately we may not legally screen the film Of Good Report as to do so would constitute a criminal offence.”

According to the festival, the South African Film and Publications Board had notified the organisers that morning that the film had been effectively banned after the board felt a scene in it constituted “child pornography”. Diff is appealing the decision and a replacement film was not screened on opening night in solidarity with Qubeka.

Film festival programmers who spoke to The Con and who had seen the film before it was banned described it as an intelligent, nuanced examination of issues like sugar-daddyism (rife in South Africa) and the psychology of obsession: The story of a school teacher obsessed with a girl in one of his classes and their consensual relationship.

This is a film vital for South Africa.

Earlier this year health minister Aaron Mostoaledi revealed that while four percent of South African boys in school were HIV-positive, the comparative figure for schoolgirls was a staggering 28%. There is general consensus in the health sector that HIV-Aids is so prevalent among young women because they are lured into relationships with older men that usually involve sexual favours being exchanged for material goods, like cellphones and clothes.

At the time Motsoaledi also revealed that 94 000 schoolgirls fell pregnant in 2011 across the country: “About 77 000 girls had abortions at public facilities. We can no longer live like that. We want to put an end to it.”

Some pregnant girls tested and found to be HIV-positive at public health institutions were reportedly between the ages of 10 and 14.

Qubeka has previously described the film as his “Little Red Riding Hood from the wolf’s perspective”.

Manzi told the audience at the cancelled screening on Thursday: “The subject matter that is covered in the film is something I see everyday. If we are going to be censored then I suggest that the minister of education, that our president and that all the people who are involved in our schooling system, that all the people that are involved in the social welfare of our youth also be banned and be censored. Just because they don’t want to see it, doesn’t mean that it’s not happening. I see it happening every single day… I’m there at half-past-two in the morning [when a young girl] is having a miscarriage and bleeding to death. I am there at four ‘o clock in the morning with a 14-year old who has somehow managed to get to a hospital to ask if she can have an abortion… I’m there every single day. It happens every single day. We shall not not talk about it. We will talk about it and we will engage with this.”

Machen said the film was chosen to open the festival because “it was challenging, powerful and artistically successful, and particularly because it was such a strong expression of an individual voice”.

Qubeka, who has declined to comment on the banning is one of South Africa’s exciting talents. Talk To Me, his 2005 documentary won a 2005 Peabody Award and he is by many accounts a fastidious filmmaker who does not flinch from the difficult topics that confront our society – approaching these in a manner that is neither gratuitous nor exploitative. 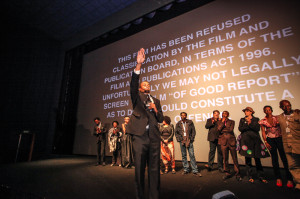 According to a letter sent from the board to Diff dated July 17, the classification committee “stopped” the classification process of Of Good Report at 28 minutes and 16 seconds “based on the fact that the film contained child pornography”. The stop was in line with the Film and Publications Regulation 16 (1).

According to the letter from Danny Morobane, the board’s assistant manager for classification and registration, the committee found that “at 27 minutes and 35 seconds, [the character] Nolitha is depicted for the first time in her school uniform in Parker’s grade nine class. In the South African school system, grade nine includes children aged 14-16 years therefore giving further evidence that Nolitha is under 18 years of age.” Nolitha is played by 23-year old actress Petronella Tshuma.

“The scene at 25 minutes and 09 seconds into the film shows Nolitha looking out the window while Parker approachs her with a seductive appearance. Nolitha turns to Parker and offers him a beer, followed by a close-up side lighting scene of her face which appears to look young and innocent. Parker then leads forward to kiss Nolitha (intimate kiss). During the kiss Nolitha removes her jacket and Parker kneels down and slowly moves his hand along her thigh, beneath her skirt. He then removes Nolitha’s underwear with assistance from her, she then hoists her right leg over his left shoulder and he buries his face between her legs. The sexual act of cunnilingus is strongly implied along with sexual effeus (sex sounds) made by Nolitha. The look of pleasure and enjoyment appears on Nolitha’s face. Parker stands up and begins to unzip his pants. The scene moves to the next day (Parker’s first teaching day). In this scene at 27 minutes and 35 seconds Nolitha is depicted for the first time in her school uniform in Parker’s grade nine class.”

“From the above it is clearly depicted that a minor as (sic) engaged in sexual conduct with an older male, and has participated fully during the sexual act” notes the letter, which then goes on to state that this fulfills the definition of child pornography as per the Film and Publications Board Act.

The act defines child pornography as including “any image, however created, or any description of a person, real or simulated, who is depicted, made to appear, look like, represented or described as being under the age of 18 years –

(i) engaged in sexual conduct;

(ii) Participating in, or assisting another person to participate in, sexual conduct; or

South Africa is increasingly moving towards social conservatism. As a country, it is also overwhelmingly Christian in its make-up and psychology. These were just some of the pillars upon which apartheid and apartheid censorship was built and it appears to still dominate with the Film and Publications Board and how they interpret art.

South Africa is also a country faced with the sort of gender-based social problems that comes from a deeply patriarchal DNA. The sort of problems that require a conversation. The statistics on female teenage pregnancy and HIV-Aids-infection rates are staggering and point towards an alarming rate of “gender-cide”. If we don’t start talking about it now, then when?

Main picture: Director Jahmil XT Qubeka taped up his mouth and burned his South African identity document after censors banned his film, Of Good Report, which was set to open the Durban International Film Festival on July 18