Judge Takalani Raulinga’s judgment, in which he dismissed an application from the lawyers of the arrested and injured Marikana miners seeking financial aid from government, was preceded by a sideshow. Julius Malema and his-red bereted compadres, including his right-hand man Floyd Shivambu, joined in some toyi-toying outside North Gauteng High Court in Pretoria, causing a slight delay in the proceedings.

Once inside the courtroom, the Economic Freedom Fighters disappeared into Pretoria Square. As for Raulinga, the Pontius Pilate comparison is apt. By basically washing his hands of the Marikana miners’ legal representatives’ application for state funding, the judge effectively authorised their crucifixion and set the Marikana Commission of Inquiry on a foggy road of delays and uncertainty. 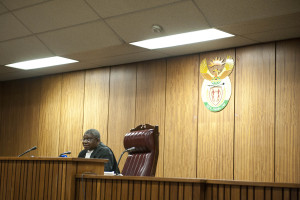 Raulinga’s judgment, delivered on Thursday afternoon in a packed courtroom for the better part of 30 minutes, displayed little compassion and even less vigour. “Some respondents are not comfortable with changing course [offering funding] at this late stage,” he read, as if oblivious to the fact that Dali Mpofu’s legal team (representing more than 270 arrested and injured miners) had first written to the government about funding in October last year. That letter went unanswered for months, as did subsequent pleas.

Mpofu’s team has received, in total, R2.6 million from the Raith Foundation, which apparently covered the period from October to December last year. There is another R2 million in waiting, for the period of mid-March to mid-May, which, if disbursed, will mean that Mpofu’s team has been without funding for more than half of the 11 months since the Marikana massacre unfolded. Compare this with the state’s seven advocates, apparently costing anything between R38 000 and R45 000 per day, and you begin to feel like the commission’s R71 million budget is being spent more or less on its defensive outlook. 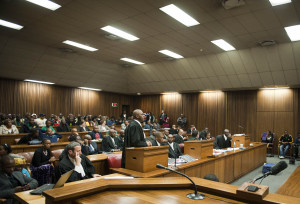 The judge, while accepting that the applicants were “indigent and justified in seeking relief”, sought to shield the state, with its lopsided allocation of alms, from scrutiny.

Raulinga, perhaps rightly so, found the constitutional basis of the case weak.

In the application, Mpofu’s team highlighted several clauses of the Constitution (mostly sections 34 and 35, which deal with access to courts and the rights of the arrested) as the basis for relief. Section 9 deals with equality before the law and states that no one may “unfairly discriminate directly or indirectly against anyone” on one or more grounds (such as social origin). 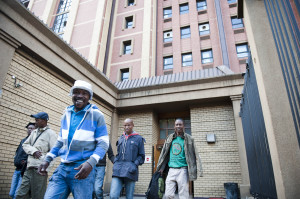 Raulinga found that section 34 related to disputes, and the commission could not be described as such. He also found that because funding for the state is sanctioned by law, no direct discrimination (against the applicants) existed. Earlier in the day, constitutional law expert Pierre de Vos argued that if Mpofu’s legal team was relying on section 35 of the Constitution, which deals with the rights of the arrested, detained and accused (such as the right to have a legal practitioner provided for by the state and at the state’s expense), then his argument was “not strong at all”, as that section dealt with representation for the accused in a criminal trial and not a commission of inquiry. His only hope, De Vos said, was “if you [perhaps referring to the judge] reinterpret that section imaginatively”.

De Vos was right − the judge stated that the applicants did not appear before his court as arrested and injured persons, but as participants in a commission of inquiry. However, the strong moral issues and the exceptionality of the case, as raised by De Vos and the applicants themselves, were completely ignored by the judge, even though he accepted that “the applicants were indigent and their fees were being subsidised”, and thus were justified in seeking relief.

“It is the prerogative of the executive to decide how to fund commissions,” Raulinga argued. “Courts can’t control the public purse. It is other arms of government. The courts must be slow to attribute higher power to themselves. 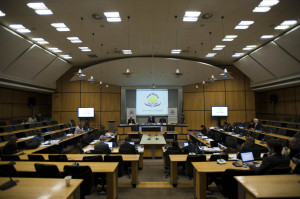 Funds are executive decisions and the [decision of] funds to be executed lies in the heartland of the executive … The court is hamstrung by the logic that no mandatory interdict can be granted unless there is proof of unlawfulness or corruption … There has been no proof of such … Parties are entitled to legal representation, whether that should be at the state’s expense is another kettle of fish … The right to legal aid is not absolute.”

With that, Pontius Pilate asked for a towel to wipe his hands.

By failing to engage with what was essentially a moral issue, Raulinga had shirked his responsibility, passing the buck to a higher court.

Mpofu asked the judge for a transcript (as the judgment would apparently take several more days to type up). In the corridors, Andries Nkone, an attorney working with Mpofu’s team, explained that they would not participate in the commission until they had been through the appeals process with the Constitutional Court. On Monday, Mpofu announced that he sought a postponement until August 19, when a ruling is expected. The decision has divided the commission and sparked tensions even with parties bound by a concord of interests. 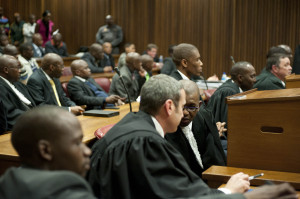 George Bizos, of the Legal Resources Centre, which represents one of the deceased mineworker’s families, has urged that the commission be postponed only until Thursday, when it will be decided whether the commission would continue without Dali’s clients. In the meantime, Mpofu will seek interim funding to carry his team until Constitutional Court rules on the matter. Bizos also mentioned possible interim funding from the Bench Marks Foundation for the arrested and injured miners.

Yesterday, the City Press reported Dumisa Ntsebeza, who represents some of the families of the deceased, as saying he had received instructions from his clients not to participate in the commission until the injured and the arrested had received funding. “We are largely dependent on the arrested and injured parties’ submissions, and if they are not represented we don’t see the reason for the commission. Some families have not even come back from their homes, saying that until the funding issue has been resolved they will not participate in the commission.”

The last we heard from Mpofu’s team was that they were still struggling to get a hold of the judgment, or the transcript for that matter, so they can begin their constitutional court appeal. Justice is now on the run.

The commission will resume on July 25.

All photographs by Madelene Cronje