The Outsider: A History of the Goalkeeper by Jonathan Wilson (Orion Books, 2012)

There isn’t an area on a football pitch that takes more punishment than the box. You can even see the damage it takes from the stabs it receives as teams push forward in search of goals in first-rate stadiums with the luxury of grass covering the whole pitch. Those pitches are the lucky ones – in stadiums where the grass is in patches or isn’t there at all, there’s barely a box left after the match. It’s a reflection of the treatment the person it houses, the goalkeeper, gets.

It’s a place that, Jonathan Wilson in his book The Outsider, compares to a forest, where the goalkeeper lies in wait to be “prey to all manners of predators”. That’s how goalkeepers are projected in highlight reels. Just like how zebras are normally shown in wildlife programmes, with lions and other predators pouncing on them to the amusement of the viewers. The hunter is always shown in a glamorous fashion, scoring great goals against helpless goalkeepers. When there’s a highlight package on goalkeepers, they’re usually shown at their worst, when they make mistakes – sight that stays on the memories of the fans more than the countless saves keepers make. Their projection, as prey for predators, comes down to the job they hold.

Wilson quotes Francis Hodgson, an amateur goalkeeper, in the book when Hodgson explains that a goalkeeper is “there to do his utmost to prevent the very thing that everybody wants to occur” – a goal. “At root, he is an anti-footballer. By being devoted to the prevention of goals, he is set against the core of football.” 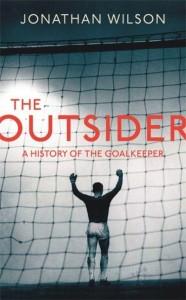 But a strange thing happened in the Premier Soccer League this past season with Itumeleng Khune – captain and goalkeeper of Kaizer Chiefs, nicknamed the Zebras as a joke to the stripped jersey they launched two seasons back – when the prey, Khune, outshone the predators, strikers. Two things make Khune’s achievements notable. Firstly, he is the first player to win the Footballer of the Year award, in the four seasons it has been in existence, without any protests that a certain player was more deserving than him. It was a unanimous decision, just like in the other three awards he left with at the PSL’s end-of-year function. Secondly, and more importantly, it’s notable because of his position as the goalkeeper, a position so neglected that it has its own award category, not because of being prestigious, but as an unwritten law that no goalkeeper will ever go so high as to win the main award. It’s there to throw him crumbs to keep him happy. There is a goal of the tournament or season award, but no award recognising excellence in denying those goals from going in.

Khune did that with distinction, letting in the least number of goals in the Premiership and contributing to Amakhosi finishing the campaign with the most number of goals. His distribution, which would put GPS to shame, started numerous attacks that led to Chiefs goals, finding the strikers with ease. His saves counted twice as much for Amakhosi, as they not only denied the opposition goals, they also lead to him launching the outfit forward with quick counter-attacks. Khune brought joy to Chiefs as a key component in moving the club away from a barren season to a fruitful one by winning the Absa Premiership and the Nedbank Cup to reclaim the glory that had eluded them for the past few years.

He breaks the confines of being an “anti-footballer” as he offers Chiefs not only security between the posts, but an attacking impetus with his playmaking abilities. Khune answers Wilson’s question, which also troubled Brazilian football, where there’s a saying that to “be a goalkeeper you must either be mad or queer”, having previously seen the position as a position in which to dump the least talented players.“How can a goalkeeper express the seductiveness, cunning and imagination that the game is supposed to be about?” Wilson writes.“His job is to be safe and secure, to stifle the creative impulses of others. He is thus cast as he had been in the very origins of the game, as the killjoy, the man who interrupted the fertility rite.”

Khune’s dominance in the Premiership as the standout player also highlights a problem in the league – the predicament of the goalkeeper. He is not always judged on his performance alone but that of his defenders and strikers against him, but he takes the blame alone.“How can he [the goalkeeper] take on these godlike, redemptive qualities if he is, by the logic of football as fertility rite, the one who prevents the soil being fertilised, if he is the one who spoils the harvest?” Wilson asks. Khune’s spoiling of the harvest was partially helped by this being a miserable season in which not a single striker could score 15 goals or more. The seeds were haphazardly thrown in Khune’s box, standing little chance of bringing fruition. The few seeds that looked to bear something, Khune crushed. Like the last-minute strike from Bloemfontein Celtic’s Ruzaigh Gamildien en route to Chiefs winning the Nedbank Cup. The Bafana Bafana captain and number one goalkeeper was also helped with having the meanest defence in the country at his disposal. Bafana Bafana regulars Siboniso Gaxa, Tsepo Masilela, Morgan Gould and Eric Mathoho stood resolute, with Tefu Mashamaite also bringing his towering frame to the mix in front of Khune.

Solid armour, coupled with razor fence, bull dogs and a top alarm system protected Khune’s house, the goalkeeper’s box. But when someone managed to bypass the tough security, he was equal to the task of keeping the intruder from destroying his house – or worse, leaving with the most prized possession in it, a clean sheet.