The Economic Freedom Fighters (EFF) is the first formidable post-apartheid ‘youth-driven’ formation to challenge the ANC’s hegemonic symbolism as the custodian of black people’s liberation.

But unlike the Congress of the People (Cope) and Agang, none of the EFF’s front men drawing crowds of red berets have genuine pre-1994 struggle credentials to add legitimacy to their ‘revolutionary’ message.

It perplexes me why, again, this weekend, a colleague asked me: “Why are you so worried about this EFF? They are going to fall apart.”

Firstly, I am not worried, I am mesmerised by the brazenness and boldness of the founding leaders in their seamless transformation from Breitling to beret comrades.

Secondly, it does not matter that the EFF may fall apart − what matters is they existed at all.

Thirdly, and most importantly, for better or for worse, the EFF marks a generational shift in political imagination and organising. These are likely the young leaders who will attract and mobilise future voter constituencies.

Its alleged dubious funding aside, the EFF has created a credible network of peers to grow its political influence in mainstream political culture and discourse.

A new cohort of leadership is being groomed. And not the ones who build up glam media profiles to get on to the Mail & Guardian’s 200 Young South Africans list, but ones who are in it for the ideas and the potential to be part of something that truly disrupts South African politics.

Before the EFF’s emergence, it struck me as strange that people considered 30-year-old Julius Malema to be a political has-been even though the guy has a good 30 years of working life ahead of him before retirement.

I was never convinced that Malema (and Floyd Shivambu) could be politically down and out, for one reason − where does a 30-year-old man, who has tasted the fruits of power and that inner vitality accorded by economic independence, go when he is losing everything he has acquired? What does he do? Was he supposed to go snivelling repentantly to a pitiful political death outside the ANC?

Why would any 30-year-old who has had the opportunity to build even the most modest version of the bourgeois dream of comfort and consumer choice simply give up on that dream?

Those of us outside politics are competitive and live in anxiety to keep our jobs. Then there are those who have yet to live the dream of comfort. Consider your 30-year-old unemployed or partially employed cousin.

While a minority of us ended up with professional or political career paths, others keep optimistically submitting their CVs for jobs that thousands of others apply for and are lucky if they even get a “Regrettably …” letter. Others simply hustle, while others resign themselves to never finding work, so they stay home watching Generations and Isidingo reruns.

This is how South Africa’s youth are roughly segmented as far as their economic prospects go. Youth unemployment is currently said to be at about 50%. But a cursory look at my own community tells me that at least 70% of my peers are unemployed. I know of very few citizens under 35 who have full-time employment. 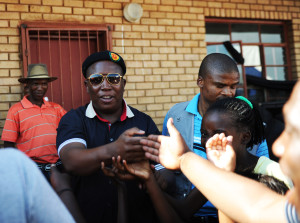 Our economy, indeed our society, renders large numbers of energetic young people, in the prime of their lives, redundant and marginal to its core functions of production, although it keeps drawing them into the sparkling dream of consumption and consumer satisfaction.

This is an economy that wants young people’s purchasing power but does not need their productive power.

By drawing us into a dream that only a few can truly acquire, this economy infantilises many young adults. It makes of them perpetual minors − adolescence is now drawn out, ending not at 18 but somewhere in one’s mid-20s.

We have a society of fully grown men and women having to ask their grandmothers for R5 to get airtime. There is something perturbing about all this.

It is a Peter Pan syndrome afflicting our adult youth. It stings even more as people watch the Sexwales, the Motlanthes and Mbetes, who were all youngish adults at the dawn of democracy, continue to hold the reigns of power with little room for a new generation.

With the exception of an Mbalula here and a Gigaba there, one gets the sense that from top to bottom, grown adults are still paying off their mortgages while the rest must wait their turn before space becomes available.

If you observe the ANC at a local level, you will notice that many youth leaders are pushing for “generational mix” quotas when positions become available in government or political office. They are tired of being used as chanters and rabble-rousers at marches.

They want offices, salaries and a chance to get on with life, to get a house, to buy furniture, to apply successfully for a credit card.

Because the economy won’t provide these opportunities, politics seems the only place to turn.

This weekend, the EFF met to ask, “What is to do be done?” I’m sure many in government scoffed, because with all the country’s plans, agencies, accords and policies, so much is ostensibly being done already.

Yet none of it seems to have provided a true remedy for the economic marginalisation felt by our Peter Pan young adults who dream the unremarkable dream of becoming masters of their own destiny.

Second take: Juju presses the flesh and other political buttons with the formation of the Economic Freedom Fighters