The missing 22% is one of the Marikana massacre’s most underreported travesties, adding insult to the death of more than 50 people who have died before and since August 16 2012 at the Lonmin platinum mine.

An implausible figure bandied about at hastily arranged negotiations to force an end to the strike, it was a smoke-and-mirrors manoeuvre that was, in fact, a show of strength by a company facing the embarrassment of the world by perpetuating a massacre that could have been avoided by dialogue.

There are different theories about how this figure was arrived at.

Lonmin claims it has never hidden the fine print, pointing out that on its website it spelt out the agreement between itself, the workers and the unions as early as September 18 2012 when it was signed.

Other commentators have said it was nice for the parties who had wormed their way into the proceedings – the likes of Anglican bishop Jo Seoka – to announce their role in a “momentous” wage increase while conveniently overlooking the fine print.

However, the company’s initial eight-sentence explanation read not much more exciting than a bank loan agreement. “The agreement includes a signing bonus of R2 000 and an average rise in wages of between 11% and 22% for all employees falling within the Category 3-8 bargaining units, effective from October 1 2012,” it read. “This includes the previously agreed 9% to 10% rises for these employees due to come into effect in October 2012. It also addresses issues of promotion for some categories of workers as well as other allowances.” 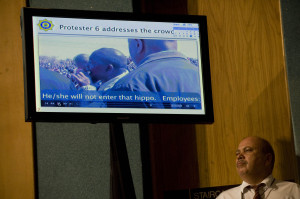 The truth is there was no 22% increase and workers that got anything more than 10%, received it as a result of the conflation of two separate wage agreements. This left workers scratching their heads and then seething when a pre-arranged 10% wage increase kicked in and suddenly formed part of what they thought was a separate wage deal.

Around the end of October, several Lonmin employees were interviewed by The Con about their salary increases. One general worker revealed a payslip in which he earned a basic salary of R4 500 before the October increase and R5 273 after – a 17.18% pay rise. Effectively, the man had received a 7.18% rise, as the 10% increase he received as part his total hike had been agreed to before the strike.

Some fared better. Another general labourer, whose basic salary had increased from R4 854 to R5 922 had received a salary increase of 22%, but this was only when including the already due 10% that had just kicked in on his most recent paycheque. Effectively, his pay had risen by 12%.

One team leader’s rate per shift had increased from R294 to R326 – a rise of just 10.9%. The worker, who identified himself as Molefi Phele, clearly explained how he had understood the increases playing out, and how shortchanged he felt by what had transpired. “The agreement was that we would receive 22%,” he said from his Lonmin family unit at Karee. “[Before that] the NUM and management had agreed that after October 1 we would get a 10% increase. It was management and workers that had agreed on a 22% wage. So, in actual fact, we are expecting a 32% increase, which is that 10% NUM agreement, plus the 22%. The priests who were negotiating must go back and find out what the deal is because we are waiting for everybody to get paid.” The above increase would have increased his basic salary from R7 011 to R9 254 – still a pittance by any stretch of the imagination. Phele further explained that one’s living-out allowance was docked when one returned from leave, “which made it difficult to survive the month”.

Amplats, meanwhile, in a bid to fast-track its intentions to retrench and end its workers’ strike (which caught on a few weeks after Marikana), was digging in its heels, offering workers an untenable “return to work with final warning” and a R2 500 loan returnable in a few months. Whereas Amplats, emboldened that it had the upper hand on workers, was open about its “loan” offer, Lonmin workers, seeing their R2 000 “chechabuya” bonus appear both as an advance the month before and then as a deduction, feared they were being taken for a ride by the company, which explained it away as an accounting function. 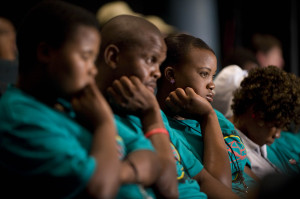 “On the earnings side there was an entry described as an early return or “chechabuya” bonus of R2 000,” Lonmin explained in a statement disseminated by its PR firm Brunswick. “On the deductions side, the R2 000 was recorded as an advance as the money had already been physically paid into the employees’ bank account on September 28. The two entries balance each other so that the effect at month end is ZERO. Failing to do so would result in a double payment.”

Bonuses aside, it was clear that the Lonmin pay hikes were oversold as a way of managing the fallout from the Marikana massacre. The R12 500, which workers would have been earning anyway had the NUM carried out its mandate over the past few years, remained a clarion call throughout last year’s strike wave and this year’s wage negotiations.

The truth is that workers didn’t gain much, if anything, from last year’s strike. Coupled with more than five weeks of the no work, no pay rule, as well as the circling loansharks on Marikana’s main drag, whatever little gains there were in salary have actually been reversed.

In a talk at a FinWrite seminar at Wits, John Brand, employment law director at Bowman Gilfillan, said the maximum increase to rock drill operators last year was in fact 3%, and that was to only a few of them because grades were conflated and those rock drillers who were below a certain level got 3% increases. However, rock drill operators had also received a R750 “allowance” – effectively a wage increase – in an ill-fated attempt to prevent an Impala-type strike at the mine. In Impala, rock drillers had gone on strike after being left out of skills retention allowances being offered to certain categories of workers.

“In fact, Lonmin workers lost 12% of their annual income during the strike due to the no work, no pay [rule], and 9 000 of the workers got absolutely nothing because they were employed through labour brokers. They were out on strike for six weeks and came back and got nothing – that’s nearly a third of the group. Every single solitary worker at Lonmin lost more in wages than they gained.”

The tone of this year’s commemoration event in Marikana was that largely that the call for R12 500 (an amount that already looks significantly more modest considering this year’s several fuel hikes and their knock-on effect) should not be abandoned as that would be to spit on the fallen comrades. With Amcu having set the tone in the gold sector’s wage negotiations by resurrecting the figure, this year it might just be harder to move the cheese around and employers, at least in the platinum belt where Amcu holds a majority on several mines, might have to reckon with the symbolic figure of R12500 once again.

All photographs by Delwyn Verasamy