Kimathi Fezile Tito, the main character in Niq Mhlongo’s third novel Way Back Home, has a lot in common with South Africa. They are both arrogant, fat – the country registering the second-highest obesity levels in the world after the United States – and have a bloody history.

It’s a history they both can’t seem to get away from no matter how much they try, with the demons of their past haunting them, not wanting to be buried in the past. Tito was born in exile, in Tanzania, from “an act of unromantic lust” between his South African father and Tanzanian mother. He grew up in Angola and joined what the author dubs the Movement.

The Movement is involved in the fight to liberate South Africa, along with exiles who had escaped oppression to mobilise outside the country’s borders before returning to wage war against that regime. Tito crossed those borders to South Africa to meet his father’s family for the first time when apartheid was on its knees in July 1991, when he was 22, a year after the release of Nelson Mandela and the unbanning of the political parties that were fighting against the apartheid regime. As a former freedom fighter, which gave him a head start, he was among the beneficiaries of black economic empowerment after 1994.

The riches he acquired through government tenders, living in the suburbs, driving fancy cars and wearing expensive clothes didn’t make him happy. His divorce to his wife Anele, who left with their daughter Zani after his infidelity, made his heart heavy. But his biggest problem is the demon of his past in Angola that is haunting him, strangling any joy in his life.

It’s a similar fate that has befallen the country – 19 years after apartheid, the demons of the past are yet to be fully exorcised. They show their ugly heads from time to time, be it during the violent strikes, through the high inequality levels and slow progress in addressing some of the problems of the past, like the land issue.

“Amabhunu ayizinja, mntanami,” Kimathi’s aunt, Yoli, says in the book. “They are dogs. When we were forcibly removed, our six-year-old brother passed away in the back of the truck because of the cold. Now they want to reconcile? Reconciliation se voet! I’m glad my brother Lunga taught you politics. You and me must go back to Middelburg and claim our ancestral land from the Viljoens. Our great-grandparents’ graves are there. Now we cannot perform our traditional rituals because of those white bastards. I’m no longer voting for any political party because they are failing to solve our problem of land.” 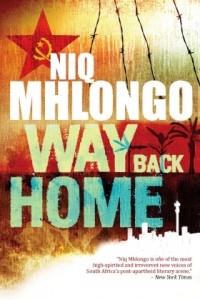 Mhlongo tackles another part of the country’s bloodied history – what happened in exile, which left some wounds that are yet to heal. Tito is haunted by nightmares and is visited by dead people telling him to make amends of his transgressions in the past. The only way he can overcome the demon that haunts him is if he tackles it head on, by going back to Angola.

The book is a critique of the ruling elite who, after taking the country to freedom, now line up to fill their pockets as they now speak the language of “currency”, forgetting the people who put them in those positions in the first place.

It’s a more mature piece of work from Mhlongo, whose first two novels, Dog Eat Dog and After Tears, dealt with the youth trying to make something of themselves in post-apartheid South Africa and led to him being described as the writer of the kwaito generation. In Way Back Home he goes back a few years to before the kwaito generation was born to write about the generation of tenderpreneurs who fought in the struggle, and comes back to the present to show the path they took since winning the fight over the apartheid regime.

He tells two parallel narratives of then and now through flashbacks showing the actions Tito and some of the members in the Movement took while in exile and how those actions shaped their current lives, careers and the country. It’s a darker tale than the humorous first two novels he wrote telling stories of hope.

It’s similar to the current dark situation in post-apartheid South Africa where former comrades, like, say, Cyril Ramaphosa – who was among the chief negotiators in the talks of settlements to move from apartheid to independence – who was on the board of Lonmin, as a non-executive director, when more than 40 striking workers were massacred by police in a protest for better wages last year. Ramaphosa played a key role in those romanticised talks – with lots of foreplay involved to get the apartheid regime and the ANC in bed to reach an agreement – to give birth to a free South Africa.

Violent protests are just one of the things the country’s people haven’t been able to move away from, having used them in the past to get their voices heard. The people are still forced to resort to them, with sometimes catastrophic outcomes, to get their grievances heard by the leaders they elected. It’s a ticking time bomb that the country needs to address and heal if it wants to avoid continuing on the same destructive path as Tito’s.