Chimamanda Ngozi Adichie’s third novel, Americanah, is a magnificent exploration of what it means to be black and an African immigrant in America. It traces the journey of Ifemelu, a young woman from her native Nigeria to the United States of America for university education. Americanah is part of a triad of novels that began with the Booker long-listed Purple Hibiscus – an intense exploration of family life presided over by a patriarch; this was followed up by Half of a Yellow Sun, a historical novel about Biafra – winner of the 2007 Orange Prize for Fiction. Chimamanda divides her time between Nigeria and America. 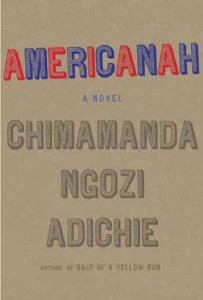 Ifemelu joins her aunt, Aunt Uju, who left Nigeria to study medicine in America. Aunt Uju left Nigeria after the death of her lover The General. “In my country, South Africa, Nigerians are known for stealing credit cards and doing drugs and all that kinds of crazy stuff,” says a woman at a salon. The émigré is seen as a threat, a threat to a nation’s principles, security, family values, and its way of life. People are always scared of what they don’t know or understand; contrary to popular opinion, that says ignorance is bliss, ignorance of the ‘citizens’ is deadly to foreigners. The emigrant is welcomed with such hostility that (s)he has to muster all the strength (s)he can to blend in. In Ifemelu’s case she starts working hard on her accent to try sounding more American. She watches endless re-run of the Bill Cosby Show studying the America way of life. When she is hanging out with her fellow expatriates Ifemelu exaggerates the number of years that she has been in America. She finds herself in a world contained in binaries of black versus white, beautiful versus ugly, citizen versus foreigner. As is usually the case when one tries to be on the “right” side of the binaries, she “outAmerican” the Americans.

But the true meaning of what it really means is often in the neighbourhood of one’s fantasies. When Ifemelu tries to find a job, nothing comes up. So she becomes a baby-sitter for house wife Kimberly and her husband Don.

When she has found her feet, and one could argue to be intimate with the “thing” you are not, she dates a white man. Their union, like any other relationship, has its pleasures and strains. But you can imagine the particular strain of a multi-racial relationship in a racist society. “Race doesn’t matter when you’re alone together because it’s just you and your lover but the minute you step outside, race matters.” When that relationship ends she dates a young black professor, Blaine, but her longing for Obinze, her Nigerian boyfriend, never stops lurking in the background.

Ifemelu starts penning a blog “Raceteenth or Various Observations About American Blacks (Those Formerly Known as Negroes) by a Non-American Black” which gathers a huge following. The blog is about her experience as an outsider in the USA. In one of her entries, she writes: “There is a ladder of racial hierarchy in America. White is always on top, specifically White Anglo Saxon Protestant, otherwise known as WASP, and American Black is always on the bottom, and what’s in the middle depends on time and place.”

It’s very hard – if not impossible – to have a frank conversation with friends, family, or colleagues about race in era of post-racialism without being seen as racist. Ifemelu doesn’t get deterred. “You can’t write an honest novel about race in this country,” says Shan, an African-American academic. “If you write about how people are really affected by race, it’ll be too obvious. Black writers who do literary fiction in this country… have two choices: they can do precious or they can do pretentious”.  That is because most novels on race try to answer the question posed to black people by W.E.B Du Bois, The Souls of Black Folk: “How does it feel to be a problem?”

Chimamanda shows how even with the largest economy in the world, America still keeps blacks on the margins.  It would have been great if Chimamanda had illustrated how this elite – about 1% of the population- still turns towards Hispanics and blacks for legitimacy. It is in this light that we should view the election of Barack Obama, the first black president.

With Obama as president, the doctrine of Multiracialism has a powerful defence. This color blindness discourse will have us believe that race is no more, that people are judged by the contents of their character. American will have its citizens and the world believe that the election of the first black president erased 400 years of slavery and its after-life. But Ifemelu demurs: “The reason you say race wasn’t an issue is because you wish it was not. We all wish it was not. But it’s a lie…We don’t talk about it… we say race doesn’t matter because that’s what we’re supposed to say, to keep our nice liberal friends comfortable.”

In another blog entry she writes: “In America, racism exists but racists are all gone. Racists belong to the past. Racist are thin-lipped mean white people in the movies about the civil rights era. Here’s the thing:  the manifestations of racism has changed but the language has not.” Ifemelu illustrates why racism doesn’t die in America; it is because it never lived in the political imagination of the privileged. To the slave master’s mind, there was no consciousness of the black and white dichotomy; slaves are property not human.

Hair, being second to skin as a signifier of race, features predominantly in most of Chimamanda’s work and Americanah is no exception. Hair “is the perfect metaphor for race in America.” “This tells you about different hair products for everyone – and ‘everyone’ means blondes, brunettes and redheads,” says Ifemelu pointing at a magazine. “I am none of those. And this tells you about the best conditioners – for straight, wavy and curly. No kinky.” Ifemelu believes in wearing her hair natural (coarse, coily, kinky, or curly), which sometimes can be misconstrued for being either artistic or political.  “Actually, the folk with the Afros and the dreads are the ones who haven’t ‘done’ anything to their hair,” said Ifemelu. “I have natural kinky hair. Worn in cornrows, Afros, braids. No, it’s not political. No, I am not an artist or poet or singer.”

Ifemelu decides to go back to Nigeria for a job; as a returnee, an Americanah, she looks at home with different eyes. The story ending is anticipated. The cliché here is not how the story ended, but the very idea that endings make stories. Chimamanda reminds us of the power of the novel to make us interrogate our preconceived ideas and presuppositions.

In Americanah Chimamanda succeeds in giving us a fascinating polemic on race, class, and gender using love. But I prefer the elegant Half of a Yellow Sun, especially the way the book was able to embody the time. However inferior it is to Half of a Yellow Sun, it remains an important book in contemporary African literature; a tome that can’t be ignored or dismissed as just another African love story.