The meeting was in response to what some have called a “press conference” held by Premier of the Western Cape Helen Zille last week. Others have just called it “silly”. In the conference she provided “evidence” that members the ANC, whom she singled out, were behind the spate of what has been called the poo war / poo attacks / shit throwing / shitfacing, which have taken place over the past few months by people protesting against their lack of flushing toilets.

Behind Sacks sat seven people from the “Marikana Settlement Community”. These people don’t live in Marikana in the North West. The shared name is a statement. The community in Phillipi East named themselves Marikana to draw attention to government’s neglect. Many of the other people at the conference were evictees are from settlements across the greater Cape Town region. These people are among the thousands who, in the past few years, have been evicted from their shacks by the Anti-Land Invasion Unit (ALIU), under instruction from the City of Cape Town. A recent mass eviction of people from this community brought some media attention to the issue, but Sacks took it further, explaining why he believed the evictions were illegal. Many South Africans may have been somewhat puzzled by the sense of déjà vu they felt at Zille’s conference. The Western Cape province logo –  white text on a blue background – was replicated, with the new text naming the community, which created some confusion among journalists. One person asked Sacks with a very straight face if he realised that the logos were the same. If you are reading this, you may want to check out www.marikanasettlement.net. You’ll see what I mean.

Zille’s team had pulled out that much-feared conference tool -– the PowerPoint presentation – to show her evidence regarding the turd war. Sacks pulled out an arguably, and perhaps necessarily, cheesier PowerPoint presentation in which he identified several head honchos and law enforcement officials from the City of Cape Town. The presentation went into substantial detail about each person, including their level of scariness, the brightness of their smile, and things they have said that are clearly uninformed or blatantly anti-Constitutional. While Zille’s speech accused the ANC of leading a campaign to make Cape Town “ungovernable”, Sacks’ response accused Zille’s “illegal evictions” of making the city “unliveable”. Sacks said the campaign “breaks the law by fabricating legislation and ignoring the PIE [Prevention of Illegal Eviction] Act” by “regularly demolishing people’s homes and leaving them homeless”.

The PIE Act came into effect in 1998 to prevent such arbitrary evictions. It cites the Constitution, which, in section 26(3), states that “No one may be evicted from their home, or have their home demolished, without an order of court made after considering all the relevant circumstances. No legislation may permit arbitrary evictions.” However, this is rarely taken into account when the city’s ALIU moves in on a settlement.

There was an element of voyeurism in the presentation. Kylie Hatton, who, following an eviction on May 3 when she was the City of Cape Town’s media manager, said “It must please be noted that the city did not remove the homes people were staying in. The Anti-Land Invasion Unit removed illegal unoccupied structures and the materials that were being used to build them.”

But photographs and videos from journalists show people being removed from shacks by officers of the ALIU – many carrying guns and wearing riot gear – while their tin and wood homes are broken down. This happens in a matter of seconds, with one person using his hands to break down an informal residence.

In some of the images presented, Hatton is seen running a marathon, and with what appears to be her boyfriend and their huskies, a photo that shows the generic white liberal, middle class, nuclear, happy family. These photos probably came from social media. She probably also kicks herself for being quoted in a press release as saying, “In situations like these, Anti-Land Invasion Units move in quickly to avoid the need to have to go through a court process,” about an impromptu eviction. The other slides, which were very overall comprehensible, pinpointed high-ranking city officials. These include Stephen Hayward, head of the ALIU, who, in 2009, was quoted in the Cape Argus, on the forced removal of the Symphony Way pavement dwellers to Blikkiesdorp, as saying, “the place they would be moved to was non-negotiable”. This is contrary to the Constitution, which requires for “meaningful engagement” prior to an eviction. In 2009, Hayward ignored a court ordered interdict handed to shack dwellers’ movement Abahlali baseMjondolo, preventing the ALIU from destroying the shacks. He instructed the destruction anyway. In the process, law enforcement officers have been reported by NGOs, journalists and evictees to act violently, as can be seen in the widely available photographs. 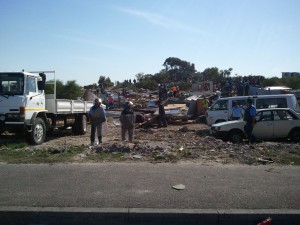 Boitumelo Ramahlele, one of the settlement members who spoke at the conference, said that when he asked the officer where his court order was, the response was, “Jy hou, jou slim,” and an attack of pepper spray. The presentation also singles out Richard Bosman, executive director for safety and security for the City of Cape Town, who tried to protect the city against a public outcry when the “blind busker” Lunga Goodman Nono was forcefully and violently removed from St Georges Mall by three law enforcement officials in July. Bosman claimed the eviction was based on a policy document from 1993, which outlaws busking. However, a look at the city’s by-laws in 2013 shows that there is no by-law against busking. Nono has now been offered a recording contract.

JP Smith, councillor for the city’s safety and security, was pinpointed in the presentation for a statement he made in November 2010, which was quoted in a number of local Cape Town newspapers, where he said he would not deploy additional police units in Khayelitsha because the residents there “do not pay rates”. “But he is happy to deploy the Anti-Land Invasion ‘Unit’ in those areas as often as he likes for home attacks on the poor,” says Sacks. Perhaps he hasn’t considered the inaccuracies that may arise from measuring the area of the land on which one’s shack is constructed.

The conference also pointed out certain anonymous and unidentifiable law enforcement officials who are present at all evictions. Law enforcement anonymous attacker #2 is pictured, again with red rings, and described as “big baas. Very scary looking … and for good reason: he carries a giant shotgun. Proficient in use of rubber bullets. Caught on video using his shotgun to chase after and shoot at township youth.” Law enforcement attacker #1 “smiles a lot and doesn’t look like she’s really into evicting people”.

Many in attendance were from the media. They came in late and stated their name their news outlet before asking the same question that had been asked 20 minutes earlier. The main – and rather simple –message was that the city is acting illegally, without court orders, and violating both the PIE Act and the Constitution in rather obvious ways. Although the conference gave substantial legal and factual information about the devastating situation faced by the thousands of evictees, many authorities and public sectors have been somewhat oblivious to the plight of human beings and in favour of policies and legalities.

It was only when Ramahlele stood up to answer a question from a smug journalist that it hit home. He raised his voice, and said: “Do you know what it is like to live without dignity like we do? When your wife and your daughters have to go to the field to relieve themselves? Anything can happen in the field. Our children are sick from all the pepper spray and the gas. I have chest problems. We have no toilets, we have no water, and now we have no homes.” Imagine how bummed out he would be in he visited Hatton’s home. Even her huskies are getting more love, and probably have a nicer place to sleep.

The City of Cape Town Responds

The City of Cape Town notes the press statement released today by the group calling themselves ‘Residents of the Marikana Settlement’. The press statement makes sweeping claims unsupported by any evidence. We have not received a complaint from the group. It seems that they favour press conferences and publicity ahead of constructive engagements with the City. The City has an extensive housing database. As such it is imperative; in the interests of fairness that land the City owns and has earmarked; is available for development. The purpose of the Anti-Land Invasion Unit is to provide a strategic and operational preventative and monitoring function by complying with the Prevention of Illegal Evictions from and Unlawful Occupation of Land Act (PIE Act 19 of 1998) and the City’s system of delegations to ensure that City, Provincial and State land is not illegally occupied resulting in the State organs losing their ability to develop the land for its intended use. The City will only apply for an interdict to protect its land and/or property from illegal invasions and will proceed to apply for an eviction order when the occupation is illegal. The City engages legal processes on an ongoing basis throughout its jurisdiction. – Councillor Tandeka Gqada

Pictures of the evictions in Phillipi East: Courtesy of Jared Sacks

Ilham Rawoot hates everything and everyone. She is the girl who ruins dinner parties. She freelances, writes for Al Jazeera, Dazed and Confused, the Mail & Guardian and Whatwhat, and aspires to bring the world to islamic anarchism. View all posts by Ilham Rawoot →