So for a while Providence band Deer Tick have been living dual lives. One as a American rock ‘n roll band with a punk spirit and the other as a Nirvana tribute band called Deervana. 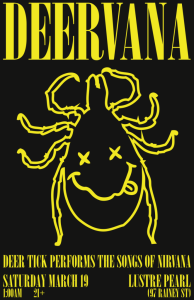 So with the band’s fifth album Negativity wrapped and recorded and due for release on September 24, the band took to the stage to perform as Deervana on September 13. They performed Nirvana’s 1993’s In Utero in its entirety, during a 46-minute set at New York City’s Brooklyn Bowl that honoured what frontman John McCauley described as “one of our all-time favorite albums”. In Utero is actually due for a deluxe reissue on the same day that Negativity comes out. The reissue collects more than 40 tracks of unreleased rehearsals, demos, live performances, and B-sides, in addition to a newly unearthed instrumental called Forgotten Tune.

Luckily for all of us NYC Taper was in the house and caught the show on record and are offering it as a free download. Head over to NYC Taper to grab the gig in mp3 or FLAC formats.