As the faux Twitter debate over Heritage Day versus “Braai Day” raged, we hit Klipspruit Valley Road heading into Soweto. Our destination: the Credo Mutwa Cultural Village in the Jabavu section of Soweto.

The reason: a performance by JBCUC. Who? BCUC is Bantu Continua Uhuru Consciousness, a rollicking band from Soweto, and JBC is Jet Black Camaro, one of Johannesburg’s loudest rock bands. Together, you see, they are JBCUC.

Some of you may have seen the South African television show Jam Sandwich which ended it third season a few weeks back.

The premise is to bring two bands and a producer together for three days and get them to write and record a song together.

The problem with a show like Jam Sandwich, though, is that it rarely actually works.

All too often you get two artists or groups who just can’t see eye to eye, and the end result is a middling pile of crap.

The recent collaboration between Durban ska-punks Fruits & Veggies and house music siren Holly, as well as the one between Soweto rockers Ree-Burth and the band Soweto Afro Pop on recent episodes, are great examples of this.

So, as you may have guessed, the birth of JBCUC started on Jam Sandwich when the bands collaborated to record the song Ayikh’ into Esingayenza.

It’s a slow-burning blues number for a minute and a half, when all of a sudden some fuzzy guitar and a whistle start to drive the song upwards.

Then at the 2:40 mark, the song goes silent, a meandering guitar lick and vocals from Skhumbuzo Mahlanngu filling the space.

This is the point at which the song really embraces its psychedelic swirl, a cacophony of sound that is inviting rather than jarring.

This song is an example of where Jam Sandwich sometimes really works.

It may not be a classic, but it’s an example of two bands prepared to let down their guard and allow true collaboration to take root.

So I was not surprised that they were taking this collaboration further with a free jam session on Heritage Day at the Credo Mutwa Cultural Village.

So now that we’ve established motive and who the key players are, let’s talk about Credo Mutwa.

Credo Mutwa was born in 1921 and is a famous South African sangoma, prophet, author and spiritual leader.

The tower is the first thing you see when you park your car.

It was built using remains from demolished homes in Sophiatown and offers visitors a panoramic view of Soweto. 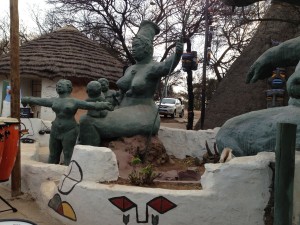 The Credo Mutwa village itself is home to a fascinating collection of sculptures drawn from African mythology. But the strange look of these sculptures meant that many Soweto residents viewed Mutwa with suspicion.

In 1976, part of the village was torched by angry youths after an Afrikaans newspaper misquoted Mutwa as saying the government had to send the army into the township to quell resistance.

The village was torched a second time in the mid-80s by striking workers. It was shortly after this second event that Mutwa left the area. He now lives in Kuruman in the Northern Cape.

The bands are still setting up as we arrive, BCUC front man Jovi Nkosi is nowhere to be seen, but Borman says he is “MIA” not “AWOL” as the band had seen him earlier in the day.

Eventually they begin without him, a circling guitar riff that sounds almost Tuareg holds down the groove, but it peters out after a few minutes.

The second piece has some polyrhythmic percussion going on and it’s funny to see the drummers from both bands eyeing each other out as they try to find common ground.

By now Nkosi has arrived and is blowing on what looks like a metal vuvuzela. He switches to a whistle and the song starts to pick up steam; he appears to be driving the band forward with his whistle and body language. The two bands are limbering up now and it’s starting to feel more cohesive.

After the bands wait a while for a third microphone to be set up, the wait becomes a sketch, which develops into a jam.

While Nkosi roams about speaking in Afrikaans about waiting for the third microphone, Hloni Maphunye begins to repeat the word “meantime”, with Borman repeating it at a lower register and slightly out of sync. The song begins to build and the music becomes quite muscular.

As the new band works the jam into a frenzy, I catch glimpses of smiles between members of either camp. The camaraderie is taking shape.

This band sounds like The Doors, if The Doors were from Soweto and grew up listening to Phillip Tabane, Hugh Masekela and Harare.

At one point the band invite the village caretaker Lebohang Sello to come and speak to the crowd of about 40 who have made it to the gig.

“Come through, my brother, and explain what is happening here at this place,” said Nkosi as an invite.

Sello comes on dancing to the band, impressing with his fancy footwork, some Tshwana dance moves I am told, and grabs a mic and begins to tell the story of Credo Mutwa and this village, but in time to the music.

The drama is hilarious and Sello punctuates his story with yelps and screams, like a Sowetan James Brown. It’s a great moment that has the audience in stitches; Sello is a very funny guy. 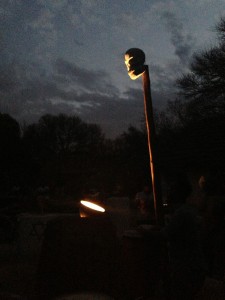 Later on, during a soulful blues number, Nkosi begins telling the audience about how this song is about all of us South Africans being stuck with each other and the best thing we can do for everyone is just to get along.

“It sounds cheesy,” says Nkosi, “but there is no cheese at Credo Mutwa Village.”

And then the band cut loose on one of those “where is my mind?” moments.

The groove steadies after the chaos and settles into a dub sound.

All I hear is Nkosi talking about the plight of the black man and then a rather punctuated “You are living large”.

It’s not clear who the line is directed at, the ANC elite or the white South Africans who deny their privilege and are happy with their ill-gotten gains from apartheid. Whichever it is, it doesn’t matter, the message is poignant for both.

As I sit in a stone circle at the Credo Mutwa Cultural Village, watching these two bands from completely different racial and cultural backgrounds have a go at really reaching each other, I am glad that this is how I spent my Heritage Day – not a braai stand in sight.

Main Picture: JBCUC warm up for the fires for in the no-braai at Credo Mutwa Cultural Village