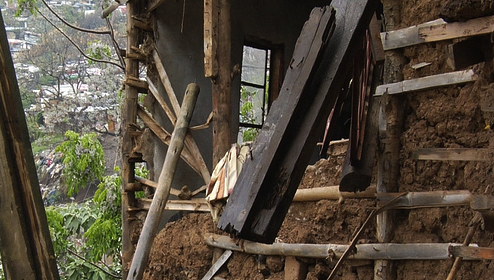 On the night of September 26, 2009 members of shackdweller movement Abahlali baseMjondolo’s youth wing were attacked by an armed mob chanting anti-Pondo slogans at the Kennedy Road settlement’s community hall in Durban. In the dark the violence spread. In the light of day, two people were found dead, while hundreds others from the settlement fled their homes afterwards.

The homes of Abahlali activists like Sbu Zikode and Lindela Figlan were destroyed, their belongings pillaged and the movement’s members were forced into hiding. The authorities blamed Abahlali for the deaths, but after a long-running court case those activists accused – the Kennedy Thirteen – were eventually set free after the state’s case was thrown out of court.

Who was responsible for the attacks on the social movement, and why it took place remain unclear. Investigations by the Mail & Guardian appear to suggest that a confluence of local political and business interest burnished by ethnic tension may have been behind the attacks.

What is certain, is that for many Abahlali activists and Kennedy Road residents, life will never be the same again. To commemorate the third anniversary of the attacks, The Con this week publishes the very personal account of Sindi Zikode, wife of former Abahlali president, Sbu, on what happened to her family after that horrific attack and what is happening to the movement right now.

My family still carry the attack on Abahlali baseMjondolo in the Kennedy Road shacks on September 26 2009 in our broken hearts. I never thought it would take this long to put our lives together. It is difficult to live in such an unstable situation. It feels like being in prison, a prison where the walls are made of fear and worry.

We have become refugees in our home town. Some of our old neighbours have become our new enemies. They were told that Kennedy was only for amaZulu. They were told they would benefit from the development we had struggled for if they forced us out. They became loyal to tenderpreneurs and the politics of division. Yet they came to attack us singing izingoma zomzabalazo (struggle songs). As we all know, the attack was planned at a high political level. Some of these ANC members even wait for shack fires so that they can steal food vouchers and building materials. All that was left for us was hope and love from our brothers and sisters, national and international. We survived in that hope and love. We had nothing else.

I never thought that one day I would miss the idea of home, where I used to dream about a future for my family, a future for my community and a future for my country. Kennedy was close to schools and work. It was not a decent place to live, but we were making it better. We were collecting the rubbish, looking after the sick and hungry, running a crèche, connecting water and electricity, creating community and struggling for houses. 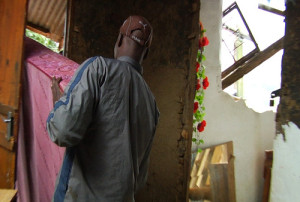 I dreamt that one day Kennedy would be a better place for my family and for all of us. But something I have come to learn is that those who attacked us knew not. Today they remain in shacks and transit camps just like us. Their situation is as hopeless as any other poor person. We have learned to think outside the box of what life entails. We are thinking far beyond shanty towns.

Displacement has given us an opportunity to reflect deeply on how unfair life can be for some people and why. I live in a community of hope and struggle and hate. I have learned that I am not just a mother of my kids as well but of the community I have come to honour, the community I have come to take risks for, the community that we have not chosen but has chosen us. It’s a community that has deep love but at the same time contains those who were persuaded to betray us. It is therefore often challenging to understand my community’s interest. It requires humbleness, patience and constant engagement. I may not be always, there but S’bu Zikode, former president of Abahlali baseMjondolo, takes every moment to study and learn from these unsung heroes.

Zikode is a good son, father and husband who constantly gets death threats from ANC politicians. They hate him so much because his politics show the truth of their betrayal.

I always wonder about when “amandla” becomes “awethu” so that we can actually celebrate. Our country needs its next Madiba who will advocate for nonviolence and always put people’s lives first, not the cruel leaders we see today. Not ogombela kwesabo (selfish elites). Our country needs more Zikodes who will always stand for the people’s rights and dignity, sacrificing their time and risking their lives for the people. When I was in school, I used to respect the ANC as a liberation movement because of the leaders like tata Madiba, Chris Hani, Walter Sisulu and many others like them.  But today, the ANC has not just betrayed me and my comrades by leaving us as to live as pigs in the mud and evicting us. It has arrested us, tortured us, destroyed our homes, shot us and even assassinated our comrades. 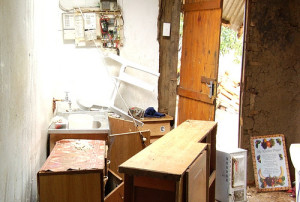 Today Abahlali baseCato crest are living in fearing for their lives because of death threats from the leaders of the ANC. We note with great concern the ongoing death threats made to Bandile Mdlalose and S’bu Zikode, both leaders of Abahlali baseMjondolo. It is clear to us that history is going to repeat itself. The Kennedy style of intimidation and assassination is similar to what is happening in Cato Crest now. Some respected eThekwini municipal leaders are accusing the amaPondo of taking Zulu land and housing that is for Zulus. They then say Xhosa-speaking people must return to the Eastern Cape but do not tell the Zulus in Eastern Cape to come back to KwaZulu-Natal. We are astonished by this discrimination that has become normal in our community. This was exactly what Madiba struggled against and was even prepared to die for.

The comrades in Cato Crest have rebuilt their homes seven times. Two have been assassinated. Another has been shot. Others have been beaten. But women will protect their homes. They are the rock of our struggle.

Now is the time for us to thank all Abahlali baseMjondolo members for their courageous commitment to defend justice and equality for all. We wish to thank all church leaders, academics, human rights organisations and lawyers who stood firm with us in those trying times of the Kennedy attack. We have some wonderful comrades. Honest people. Brave people.

Today we urge you all again to stand firm with Abahlali baseCato Crest, who are under attack by their own local government and the party many of them voted for. We have no reason to doubt that ordinary people who are not controlled by tenders can confront the politics of division, behind which lie the forces of capitalism.

Main Photograph: The outside of Sindi and Sbu Zikode’s house after it was attacked in 2009

Second Take: Friends assist in clearing up the house as the Zikode family goes underground

Pic Three: The inside of the Zikode home after the attacks in 2009

Born in Durban at Amatikwe Clinic in Nanda, on December 13, 1974, to Neliswa Margaret Mkhize and Zesibone Moses Mkhize. She grew up in Eastern Cape at Ntabankulu with my her granny Nontsikelelo Mayaphi. She attended my Primary School at Bonxa Junior Secondary School at the Eatern Cape, and completed my senior secondary at Ntabankulu Senior Secondary School. Sindi works at Drive Control, a computer company as a Clerk. Sindi is a member of Abahlali BaseMjondolo Women League and Abahlali activist. She joined the struggle of Abahlali BaseMjondolo Movement of South Africa in 2005. In 2007she became a delegate of Abahlali Women League to Nairobi. In December 2012, Sindi was sent to represent Abahlali at Africities Conference in Daker, Senegal. Sindi is a partner with S’bu. Zikode, a leader at Abahlali BaseMjondolo Movement SA. View all posts by Sindi Zikode →