As the sun set over Doornfontein in downtown Johannesburg, so did the reality of losing to the All Blacks at our spiritual home. It had been deemed the clash of the titans, the world’s number one team (All Blacks) against the challengers to that throne. Let’s be honest no other team in world rugby has the potential to unseat the All Blacks. But the Springboks learnt on Saturday that we still have some way to go.

Springbok coach Heyneke Meyer, speaking in a post-match interview, inexplicably said, “So they didn’t score off our mistakes – like usual it was just bad defence. But I am proud of the guys, I think we are closing the gap.”

After hearing his comments I began to wonder if we were watching the same game.

You see, I have a problem where I find myself analysing rugby matches, looking at them play by play. It’s mostly the reason I watch rugby alone, so I don’t annoy fans who just watch the game for fun. But last Saturday I was out with friends, the excitement of the game was builiding and deep down I still harboured a little hope that the Springboks could do the unthinkable and squeeze a win against the old foe.

But even at the first kickoff by the Kiwis we couldn’t gather and were immediately under pressure. I don’t intend to analyse the game play by play, but I have done some homework for Meyer, like a true patriot, like our Number 1 asks of us. The homework appears to be very well timed, considering his statement above. So here are the few lessons you should have learned from this game, Mr Meyer. 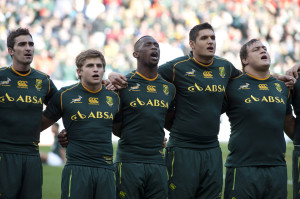 As the ref blew the final whistle many walked away in anguish, a fitting reaction to getting a proper hiding at home. I was left with more questions than answers – are our forwards getting the best training from Johan van Graan? Are we learning from our mistakes and constantly trying to improve? Will the team win the 2015 World Cup without a decent defensive coach? Will Meyer make the personnel changes he needs to make to ensure the team progresses? 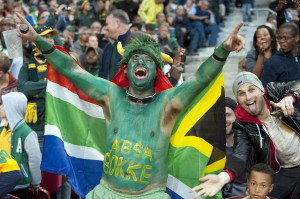 As I listened to the post-match interviews, I wondered how far our passion and physicality could take us. I also wondered how long the hopeful South African fans could go on without change – positive change.

All photos by David Harrison

Malusi Mbambo was born in a small Northern KZN town of Ulundi and grew up herding cattle in the fields of Sangoyana mountains. Malusi is a sports fanatic who enjoys the technical side of sport, he is also a failed rugby player who was just not good enough. Malusi currently spends most of his time representing a large sports tourism group based in Sandton, he has a keen interest on the outdoors and music shows. He has had stint on television as an outcast on South African Survivor Maldives where he discovered new levels of hunger and suffering. He is now based in Johannesburg and refuses to call it traffic. View all posts by Malusi Mbambo →