out in the world of shopping today

people queued for discounted
overpriced lightweight cycling shirts
and other accoutrements in the colour
of the LSD rainbow
whilst nearby, in Builder’s Warehouse
lawnmowers awaited the surge of summer
and hundreds of door handles
a hand to hold
and tug them from their lonesome
disassembly into the wood
of a home where a dartboard awaits

in Athlone, near Mecca Plan Car Spares,
taxis rolled out their shouts and stirred
their backsides over the train bridge
and headed for Jan Smuts

at Merrypak, Pinelands, people sat in the coffee shop
like it was the most natural thing in the world
to be meeting your friend or your aunt
in a shop that sells padded envelopes
highligthers and thick, gold paper

Voortrekker Road, Maitland, yielded
a sidestreet called Quality
– not a joke, no –
and a man with big strides
wearing a blue and white motocross shirt
and red and black clown pants
billowing in the wind
he sailed past the nose of my car
a Czar, an alien, a ship towards
the New Continent

where, oh, where, shall my size 9
green, lightly padded
gumboots
come from?
hey? 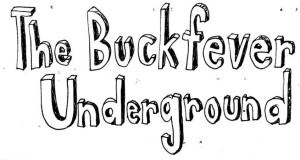 Heads Up:  Toast and The Buckfever Underground are going on an national tour of living rooms from the last week in October to mid November. Dates are below. 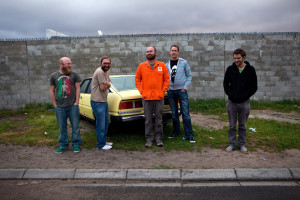 The band recently posted on Facebook: Righto, “So we’re touring soon and while some of the smaller shows are free/donations only, we’re running Port Elizabeth, Durban, Joburg and Pretoria via the Troubadour crowdfunding platform. So if you plan to come to one of those shows, do visit this link pronto, pledge your cash (it will help us to have fuel in the tank for when we set out on this 19-date tour…) and we’ll see you there! Feel free to send the link on to any friends in your city/ area who you reckon might be keen… Dankie!”

The band also posted, “This is coming soon, via our good friends at Laugh it Off. Our 2013 tour t-shirt. Men’s and women’s cuts. Price to be confirmed. Advance orders direct to Toast at info@thebuckfeverunderground.com” 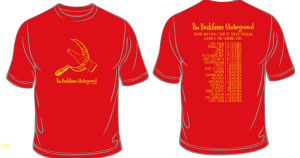 Toast Coetzer is a travel writer at Go/ Weg travel magazines but also moonlights as band member in The Buckfever Underground, Simply Dead and Walkie Talkie. He’s also one of the co-editors of the oldest (and most erratic) Afrikaans zine in the world, Ons Klyntji. He co-hosts The Unhappy Hour on Bush Radio 89.5 fm every Sunday from 6-8 pm in Cape Town. View all posts by Toast Coetzer →