In 1960, Franco was left decimated when most of his band defected, but now some reissues shine a light on this great musician during what was difficult time 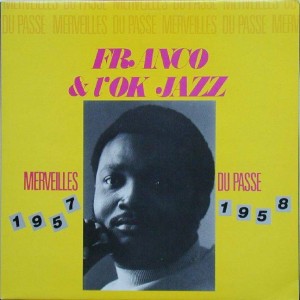 As the infamous OK Jazz phrase goes “On Entre OK, On Sort KO” (On entrance OK, on exit KO). The phrase was a self-referential comment on this legendary Congolese band’s ability to bowl over their audiences. To sample this band, you should get hold of Merveilles Du Passe 1957/58/59, the first of the three reissues that document OK Jazz’s early output. I had a friend pick up my copies in an international airport, but I have since discovered that these albums retail on South Africa’s new iTunes music store for R49.99.

This album is the classic late-Fifties period OK Jazz, and it’s a pearler. It features rhumba guitarist Luambo Makiadi, commonly known as Franco, and his bandmates in full swing. OK Jazz, the band synonymous with Franco’s name, was established in 1956, so these are recordings from the band’s second to fourth year. An early highlight is Franco’s Oyangani Ngai?, with some great solos from the guitarist and a bluesy tenor sax to bring it home. Mami Majos has an old-school Havana feel about it, while OK Jazz Makila Mabe is a corker – you can just imagine OK Jazz with the dance floor heaving, all those fans KO’d.

But the album is also a reminder of the talents that Franco would shortly lose when OK Jazz faced defections in 1960. As the Congos lurched towards independence, Franco found himself in a tight bind. He was knocked down, perhaps, but definitely not knocked out. In 1959, as independence for the two Congos approached, Jean Serge Essous and several other Brazzavilleans working in Kinshasa returned home to form Les Bantous de la Capitale. Under Essous’ leadership, Les Bantous developed into one of the leading Congolese rumba bands. The band would include former OK Jazz stars Edouard “Edo” Ganga (vocals), Célestin “Célio” Kouka (vocals, maracas) and Daniel “De La Lune” Lubelo (bass). But then singer Vicky Longomba left in 1960 when the band was in its fifth year. Listening to Longomba’s songs on Merveilles Du Passe 1957/58/59, it’s easy to see why his defection would hit OK Jazz so hard. Longomba’s voice and Franco’s guitar have a beautiful musical relationship, one of the great duets of jazz. On Tomesani Zonga Coco and Noboyi Libala Bambando, Longomba is simply superb.

Ganga also chips in with the down-tempo blues of Tokeyi Kobina Calipso, more drinking the pain away than tearing up the dance floor, but it’s a great song nonetheless. Sure, Franco outstrips them all with some scintillating guitar work on Kenge Okeyi Elaka, but these familiar and hugely talented musicians would not be around in 1960. Antoine “Brazzos” Armando would also defect in 1960, after travelling with Longomba and Joseph Kabasele and members of African Jazz for performances and recordings in Brussels at the round table conference on Congolese independence from Belgium. Longomba contributed backing vocals on Kabasele’s Indépendance Cha Cha, one of the most famous Congolese songs of all time. Vicky’s departure for the round table ruptured his relations with OK Jazz. When he returned home he formed a new band called Négro Succès. 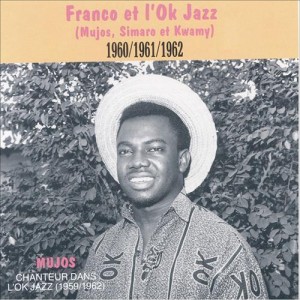 In the meantime, Franco introduced a number of new recruits. Guitarist Simaro Lutumba joined the band and became a Franco stalwart, and one of OK Jazz’s finest composers. Simaro would rise in stature over the years to become second in command to bandleader Franco. Singers Joseph “Mujos” Mulamba and Kwamy Munsi also joined. The second reissue, Mujos 1960/1962, subtitled Mujos, Simaro et Kwamy, heralded the introduction of the new band members.

It starts off well with Ya Luna Umbanzila, with its shredding primal guitar, a song that was written by Lubelo and was probably a leftover recording. Mujos features on a number of songs, including Motema Na MJ and Miguel Canta, but his highlight is Como Quere, which starts with a mournful horn and a strum of a guitar before it struts off at a steady pace. Franco again delivers great songs like Telegramme Maloba Mokuse and Nani Apedalaki Te, while the boisterous almost rock ’n roll guitar of Bulunde Na Zongue is addictive, and the country shuffle and tex-mex guitar of Mobembo Mabe Boye is a nice pleasant departure from the rest of the album.

Simaro pops up with Mado Oboyi Simaro?, a pleasant enough little song, but he would go on to write some of OK Jazz’s best tracks. On the whole, the 22-track album is a bit hit and miss, and its clear that this is a new band finding its feet, especially when you compare it with the third reissue, Merveilles du Passe Volume 3 1961/1962, which features Franco with a fine ensemble of guitars, bass, percussion and saxophone. Sweet vocal harmonies and beautiful tenor solos whisper above a rhythm of maracas, bongos and light percussion. Added to the mix is Franco’s sweet yet gritty guitar, and the result is pure heaven. Here Franco resorts to a slower more methodical rhythm with more finesse and subtlety. 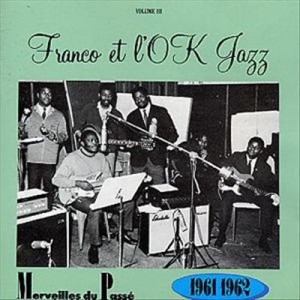 In 1962 Franco embarked on his first foreign tour when he visited Nigeria, which culminated in the release of Cherie Zozo. Later that year, Vicky rejoined the group, as did vocalist Lola Checain. By the mid-Sixties, OK Jazz had been renamed TPOK Jazz and had expanded to more than 20 musicians. The TP prefix stood for Tout Pouissant (all powerful). It boasted an array of talented players and was ready to challenge Africa Jazz for the position of Congo’s – and in effect Africa’s – premier group, a task that was made easier when Tabu Ley and Docteur Nico left Africa Jazz to form Africa Fiesta.