Mukoma wa Ngugi’s latest novel, Killing Sahara, follows a detective team : Ismael, an American detective and his partner Odhiambo, known simply as “O”  as they investigate the case of a dead American in Kenya.  Found in the notorious Ngong forest, where many high profile Kenyans have been found murdered, the Afro-American’s “corpse looked more like an animal carcass”. But soon after this, even before they could even find out who the deceased man is, their world is rocked, literally, by a massive bombing at the Norfolk Hotel, a spot frequented by tourists and Kenya’s elite.

Killing Sahara is a sequel to Nairobi Heat (Penguin, SA 2009), a story set in the American college town of Madison, Wisconsin, where a young white woman has been found dead on the doorstep of a visiting Rwandan professor. Mukoma wa Ngugi is a novelist, poet, and a literary scholar, the son of the world famous and acclaimed writer and theorist Ngugi wa Thiong’o.   Mukoma wa Ngugi has also published an anthology of poems, Hurling Words at Consciousness (AWP, 2006), and he was shortlisted for the Caine Prize for African Writing in 2009.

I met Ngugi before he went back to America after attending the Open Book Festival in Cape Town. He explained that the idea behind Killing Sahara was to try “investigate the ethnic violence that broke out during the 2007 presidential election. How people who were neighbors the one day started killing each other the next. And also tell an entertaining story.”

But before we could talk about his new book in-depth we touched on the subject of African literature and the role of story and the story teller in addressing the challenges that face the continent. He echoed what he said at the Open Book festival that “one of the big dangers to African literature is the reluctance of critics to allow African literature to be many things.” Ngugi used Helon Habila’s criticism (The Guardian, June 20th) of NoViolet Bulawayo’s debut novel, We Need New Names, as an example of the limitations of criticism. In that review Habila asks “whether this new writing is a fair representation of the existential realities of Africa, or if it is just a ‘Caine-prize aesthetic.’”

Ngugi thinks that such questions of representation – which are raise often in criticism of African literature – are not “letting African literature be what it can be.” He believes that the role of the writer and the intellectual “is not writing or talking about Africa in a certain way, but exposing the contradictions between poverty and opulence. You can’t take one without the other.” In his view it is not the job of the writer to portray Africa in a positive light; “we don’t work for the department of tourism”, he said humorously. 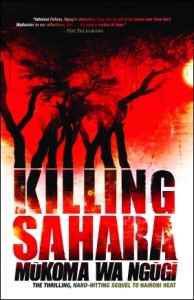 Killing Sahara is set against the backdrop of the 2007/08 presidential elections in Kenya and just after Barak Obama announced his candidacy for the office of the President of the United States. Ngugi explores what Obama meant to Kenyans and the lone African-American in Kenya – Ismael, a resident of Kenya for three years. In the first book, Nairobi Heat, Ismael is trying  to fit in while in the second book, Killing Sahara, he is more at ease with the idea that he is an American in Africa.

I asked Ngugi-born in the United States in 1971, but raised in Kenya, which he left to return to the United States for his university education- if he thought immigration, especially of writers like him writing African stories whilst living abroad, was detrimental to the future of African literature. “I think it’s an extremely positive thing, because it is bringing in new knowledge’s and new questions, like when we send out kids abroad what happens to them instead of when are they going to send us money, or when are they coming back to build the country. There are horrible things happening to people abroad. And maybe these are some of the questions a literary critic, like Habila, could be asking.”

The two joint-smoking justice seekers, O and Ismael, are trying to solve three particular mysteries:  (1) How an American ended up dead and eaten by wild animals in the notorious Ngong forest, and (2) who was responsible for the bombing of Norfolk hotel, the local CIA head honcho assumes it’s al-Qaeda, and (3) how all these events connect. With the recent events at Westgate mall, in Nairobi, where more than 60 people lost their lives to someone else’s “cause”, the dangers of extremism become apparent.

O is married to a school teacher Mary. Ishmael is in love with – and contemplating marrying – Muddy, a poet, and a veteran of the Rwandan Patriotic Front (RPF). Muddy’s experience with the RPF has taught her the true meaning of war. Using her poetry she warns Kenya of an impending catastrophe: “There is no such a thing as a tickle of blood, each drop today is a flood tomorrow.” The Kenyans, for whom a little blood every election is a norm, dismiss her erudite advice. But, as she had predicted, the presidential elections unleash a “vortex of violence” with ethnicity against ethnicity in a wholesale slaughter.

Uhuru Kenyatta, Kenya’s president, and William Ruto, his deputy, have been indicted by the International Criminal Court for crimes against humanity for their alleged role in the deaths in which up to a 1000 people died and many more were displaced.  “I felt Kenyans were just ambling along, but this time around [during the 2007 elections] the violence took everybody by surprise and it looked like it was going turn into a civil war. In the book I wanted to capture that ambling along; people going about their business and history catching up with them,” Ngugi explained.

But, to return to the book, Ishmael, Mary and Muddy are captured by men trying to find out how much O and Ishmael knew from their ongoing investigation. In a chaotic rescue mission one of the four gets killed.

On their way to Limuru, Mary’s home town, they encounter a blockade by a group of angry young man who refuse to let O pass because he is not Kikuyu. Ismael tries to reason with them, to showing them that what they were doing was not justice but murder, and the group leader retorts: “Murder? Justice? Do you think I care? It’s one less of them.” It then becomes obvious to O, Ishmael and Marty that only through violent means can they all pass. The violence at every encounter leads to more violence, and escalates issues.

The trio – O, Ismael and Marty – gets caught up in a cross-continental conspiracy in which  they encounter various thugs and smugglers, government agents and drug kingpins, hackers, assassins and evil do-gooders.

By the end Ismael is struck by many moral conundrums:  Was all that violence necessary to get to the truth? It is morally justifiable to let a “conference center full of thug politicians live to kill thousands tomorrow, only to save a pickpocket.” Interestingly, the two Africans – O and Marty – are not openly fazed by any of their actions; they seem comfortable with the idea that, at times it is necessary to play by the “fucked-up moral code” of the bad guys.

Forget Dostoyevsky for a moment, Killing Sahara explores very well the connection between good and evil in an African context.  The absurdity of thieves and thugs, prostitutes, politicians and cops putting aside their daily vocations to enjoy a beer and roast goat-nyama choma, in the parlance-under the same roof.

The book is not only a detective novel, but also a political thriller.  Ngugi invites the reader to relook at some of the major themes of African politics: Identity, corruption and race, genocide, external influences on African politics, and, most importantly, the enigma of ethnic violence. Any word of advice for young writers?  “They must start educating themselves on the business side of writing and reading. But reading would be my main one,” Ngugi explains.  Killing Sahara is such a masterfully done and entertaining detective story that I’m looking forward to Ngugi’s next book on Nairobi.