“Nyjah Huston must be sick of hearing his name – ‘Nyjah, Nyjah, Nyjah, Nyjah,’ that’s all we hear,” said a sarcastic thirtysomething South African skater. The 18-year-old Huston was on the tip of everyone’s tongue a few weeks back at the Kimberly Diamond Cup (KDC) skateboarding championships in Kimberly in the Northern Cape.

The KDC was held for the first time this year and is South Africa’s premier skateboarding event, hosting skaters from all over the world and all over the country. Huston won the street skateboarding world championships, fighting off some tough competition from Felipe Gustavo (22), Louie Lopez (18), Manny Santiago (28), Alec Majerus (18) and Evan Smith (22). The crowds were suitably impressed and young skaters raved about Huston’s performance. “Nyjah Huston did a backside 270 backflip down the hand rail, it was insane,” said Durban skater Braxton Haine (19). Haine had won the South African KDC Am earlier in the day.

Some footage of Houston doing a backside 270 kickflip to backside lipslide at the Kumba Skate Plaza in Kimberley. 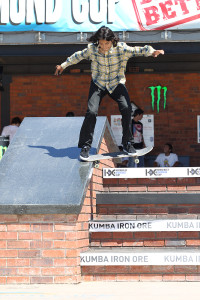 In the Vert and Big Air competitions, Bob Burnquist (36) was a notable absentee; the Brazilian skateboarding legend finished second in the event at the Maloof Money Cup in 2011 and 2012. But Canadian Pierre-Luc Gagnon (33), who many consider to the best vert skater in the world, was back. Gagnon won the inaugural event in 2011 and defended his titled in 2012. Also returning was Andy Macdonald (40), who finished third in 2012. Joining these old hands was skateboarding child prodigy Jagger Eaton, who at all of 12 years old was the only skater to compete in the Vert, Big Air and Street competitions. Eaton’s father runs a skateboarding academy called Kids that Rip and last year the 12-year-old became the youngest skater to skate the MegaRamp at the X-Games – and he qualified for the finals.

Senior skaters like Burnquist have questioned the rise of Eaton and other skaters under 16, such as Tom Schaar and Mitchie Brusco. Schaar (14) is the youngest skateboarder to land a 900 and the first skateboarder ever to land a 1 080. He was only 12 at the time. Brusco became the first skateboarder to land a 900 in the Big Air contest in 2011 at the age of 14. “You have to keep in mind, this is a professional contest, and you can’t just open it up to any kid who can jump the Mega,” Burnquist told ESPN. The argument is that 12-year-old boys are sometime less than half the weight of the veteran pros and naturally get more hang time. “If the contest organisers really want to do it that way, have a kids division,” argued Burnquist.

At the Kimberly Diamond Cup this year, it was another 16-year-old that was impressing. Jono Schwan landed a 900 on the mini mega ramp, which earned him the Big Air title, but he only came in third in the Vert competition.

Andy Macdonald was chasing him all the way, finishing tied second in the Big Air. But Macdonald’s fantastic runs on the vert ramp saw him take the overall title of Vert World Champion. Schwan came in second, with Gagnon having to settle for third. Eaton meanwhile, wowed the crowds with some impressive tricks on the Mini Mega, eventually tying for second with Macdonald in the Big Air competition.

In the South African KDC Am on the Sunday, Haine waged a tough battle. Fellow Durban skater Khule Ngubane (19) took second, with Cape Town’s Mitchell Rice (22) taking third and Kimberly’s own Warrick Delport (23) coming in fourth. The Con caught up with Kimberly’s top skater Delport after his fourth placing. He said he had been skating for 10 years. “When I started it was just a handful of us skaters in Kimberly, skating the streets, hustling for boards wherever we could. We did it for the love,” he said. “And that love is what got me here.” “I am climbing the ladder slowly but surely, so hopefully next year or the year after I will skate pro and then internationally.” The Con asked Delport what he thought of a tournament like this being in his back yard. “Skating has just boomed in South Africa because of this. I am so stoked and so happy and so grateful. “We are just going to keep producing soldiers of skateboarding in Kimberly,” said Delport.  “Kimberly is flooded with hundreds of skaters since this park was built and there is so much raw talent just waiting to be discovered.”

The KDC has three grand slams that are held in the build-up to the event to allow local skaters the opportunity to qualify to skate at the main competition through wildcard entries. Each year grand slams are held in Durban, Johannesburg and Cape Town, and earlier this year The Con attended the Durban Grand Slam. Cape Town-based South African skaters Dlamini Dlamini (21) and Jean-Marc Johannes (22) had flown up to Durban to have a shot at taking home a share of the R50 000 prize purse. But Ngubane took the main event, netting R10 000 and a further R2 500 for the best trick, a nollie bigspin heel flip backside lip slide down the A-frame rail. Haine took second and Johannes third, while Dlamini won the skater’s choice award.

A few weeks later at the KDC, The Con ran into Haine. At the time he was skating the mini vert ramp at the back of the main skate park in Kimberly. It was teeming with young kids – some looked as young as seven or eight – all dropping in and showing off their skills. The Con asked Haine about the win. Although he was “stoked” about it, but chose to wax lyrical about the skate park in Kimberly. “I came here with the Element team to skate the park for a few days, but I’d like to come back with my homies and camp and skate the park, because it’s so amazing. “In the next couple of years you are going to see more little Nyjah Hustons coming out of Kimberly. “Every day I am seeing new kids at the skate parks – it’s really growing,” he said. “The kids are getting so good, too, now that kids know they can have a proper career in skateboarding and they are focusing. “It’s great for people to see skateboarding as a professional sport like surfing or snowboarding.” 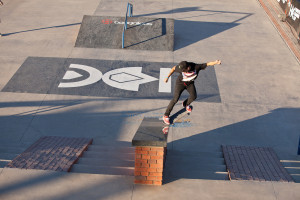 South Africa’s top skaters in the KDC’s Street World Championhips were Cape Town’s Moses Adams (23) and Dlamini Dlamini (21). Adams and Dlamini are among the few South Africans to have skated overseas and the only two South Africans to skate the Street World Championship at the previous Maloof Money cups. But Australian resident Tommy Fynn (25) was born and lived in South Africa till the age of 10, so the home crowd often claims him as a local. Adams and Dlamini both performed poorly and failed to qualify among the top 12 pro street skaters, coming in 19th and 18th respectively. “It was tough out there. I didn’t have a good first run and I thought I’m just going to enjoy the second run, even if I don’t make the finals,” said Adams after the qualifiers. Fynn qualified in 11th place but was knocked out in the head-to-head finals on the Sunday. Even with no locals left in the competition, the crowd was still treated to some magnificent skating, with Huston emerging as the winner.

Photo 2: Down the bubba: Louie Lopez at work

Photo 3: Up the hubba: Nyjah Huston at work

All photos courtesy of KDC